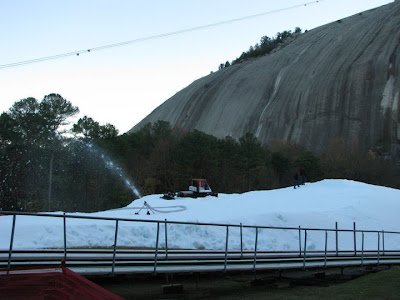 Please tell me it's really Friday and that I'm not imagining things.
This week needs to end. I need to see a doctor. I need to be able to breathe and not cough.
Of course... last year I practically took up residence at the doctor's office and they never really cured me... it just had to run it's course... and in between I spent a lot of money and suffered thru a lot of nasty side effects.
The only thing that has me really concerned is this stabbing pain in my left lung. Last night it was so bad that I considered urgent care... but I really just very much didn't want to get out in the cold. I took some nyquil and went to sleep. It's better this morning. It could be the granuloma things that have become inflammed. It could be from coughing. I don't know. I just know that on my way home from work last night, it hurt to turn the steering wheel. Fortunately... it's pretty much a straight shot from Demorest.
I'm craving carbs. Crackers and... ugh... last night I gorged on fritos. I don't know why. I fear it will mess up my weigh in this week and if so... I will be so bummed! It's not uncommon for people to have a holiday weight gain but ... it should be because of eggnog and rumballs and sausage balls and fruitcake or whatever... but fritos? So ashamed.
Bitty can't stand for there to be anything other than his "approved" inventory on my bathroom counter. There was a new makeup brush there this morning and he pushed it to the floor and is now playing hockey with it. Or soccer.
I have plans with David tonight. If I'm feeling icky, I think we'll stay in and just hang out here. He doesn't mind, fortunately.
We're expecting snow flurries on Sunday which is PERFECT because I'm doing some holiday photos that day for a friend and their kids.
I'm usually offended by the "Happy Holidays" greeting because there seems to be this increased effort to eliminate the Christian aspect of Christmas... but I got a lovely holiday card yesterday from my very Jewish Mr. Drake and it warmed my heart... among the highlights of my day yesterday. He's such a kind soul. *sends love* and it did make me feel a little less intense about the need for this special time of year to be for Christians only.
And a card from my dear Eva in New York. If my plans to travel to NYC early next year pan out, we will definitely get together! Your baby girl is absolutely scrumptious!
I found a stack of cards that I didn't get mailed yet... thought they had all gone out already. Patty, yours is in that group... on the way!
I have some major projects for Christmas that I absolutely MUST get done this weekend but I'm very excited about them.
That also includes doing some sausage balls and russian tea mix.
Purple Michael was reportedly on local tv this morning but I missed him. *sad face* The photo above is from Stone mountain where he works.
I've added Cityville to my list of gaming addictions.
I'm so glad it's jeans day... I've got a lot more outfits to choose from now that I've lost weight (yay me!) but I'm ready to be casual. I don't mind dressing up but at heart I'm a jeans kind of girl.
I really want a cool pair of boots. Also on my wish list: airline tickets to NYC, a rice cooker, an iPod, an electric blanket...
Time to wake the sleeping teenager and to get ready for my Friday.
Hope you have a wunnerful, wunnerful day (Lawrence Welk)...

Hi Heather : )
I feel like you today ... I'm doing a very labor intensive and time sensitive project which is NO fun at all! shouldn't even be on-line ... but I am, so just wanted to tell you real quickly that I look for ward to my card .... whenever it gets here! I've been waiting for it so that I'll have your address and can send you yours : )

Okay, back to work for me. I wish you were close by to do this typing for me. And, I wish I had a nickel for every time I said those exact words during this project!

The question is, of course, what causes the granulomas? What is at the root of all this? Is it parasitic, is it an allergy, is it a virus which was never been properly treated? There must be a doctor out there who can get to the bottom of this, even if it's a non-traditional type of doctor. I know they said at one point it was viral bronchitis, but "itis" just means "inflammation of"... so it's more a symptom than an illness. It's just not right that you can't get a definitive answer about this, although I know that medicine is far from an exact science.

Remember to use lots of garlic since it's a powerful antiviral and antiparasitic.

I laughed out loud about Bitty and the bathroom counter. You have a really great way of writing about everyday things.

Hope the weekend brings some needed rest and relief!