A Farmer From Brooklyn

It's been a short weekend for this old girl who has gotten spoiled with 3 and 4 day weekends. I rested a lot. Did some food shopping for the things that me and mama like to eat that Pop can't have on his diet. Cooked two meals. Cleaned up from one meal. Watched a lot of football. Watched a lot of documentaries. Stayed on the heating pad almost non-stop. Muscle spasms are bending me in two lately. Weakness in my legs, especially when I first get up in the morning. Working less is better than working full time but I am by no means pain free.

And now.... even though it's a rainy Monday and I just don't want to move... I'm committed to finding Reasons To Love Monday. I hope you will too! 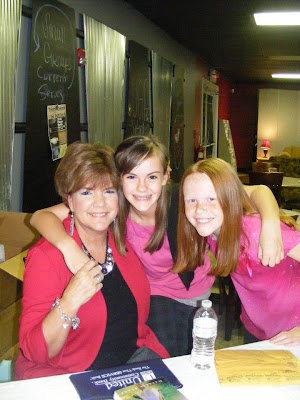 1. I snagged this picture from one of Natalie's friends . This is a picture of my niece, Sarabeth (r) my adopted niece Jorjanne (center) and a lady I don't know. What I love about this picture is Sarabeth's natural, true, joyful, unposed smile. That's how I know her. She'll be ten years old on Sunday and it seems like it can't be possible that she's that old... also seems like she's been a part of my life for all of my life. She's just so beautiful and graceful and exquisite. I love her so much. And then I look at Jorjanne and all that she has been through in her life. She's 11 now. She has the kindest, gentlest spirit. She is such a great friend to Sarabeth - she's a sister friend. and that makes my heart swell to know that my girl, SB, knows the kind of bonds of friendship that I've been able to enjoy all of my life. 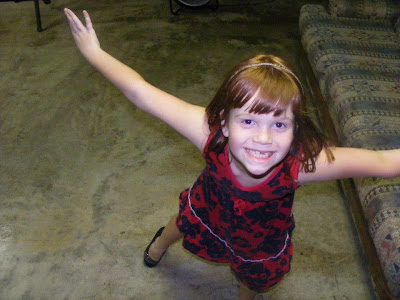 2. And this angel... there are no words to express how deeply I love this child. She is like looking into the past and seeing myself... although I think her spirit is far more pure and sweet and innocent than I ever was. She'll be 8 in December. She's missing enough front teeth to be a jack-o-lantern. She loves girly frilly stuff. She's style conscious. She's just simply amazing and I can't believe how blessed we are to have a Jamie in our lives.

3. I will work today, be off tomorrow, work three days and then off two. It's not the perfect schedule but it works with the things we've got going on this week.

4. Mom has a scan to check for any new/different cancer growths. I'm able to be here and be off and be with her. I have had so many medical procedures that I just wished that there was someone with me, to take the pressure off of me... to make the drive there and back less stressful... to make the wait in the waiting room more social and less sterile. To help me remember what the doctor said. To help interpret what the doctor said. To just. not. feel. so. durn. alone on the planet. It's a great thing to be able to be with mom. Sitting in waiting rooms sucks for my back. It's one day. I can do it.

5. The weather has turned cooler and that means I'm wearing *my cute boots!* (said in my booming Oprah voice). Hello fall! Come and stay awhile~!

6. I found some interesting stuff through my research this weekend... that's part two of this entry. I tried to highlight some points that stuck out to me (in case you just want to scan through).

Hope you have a great Monday! Keep reading if you'd like to find out about our Farmer from Brooklyn.

Wolphert Gerretse Van Kouwenhoven, one of the founders of New Amsterdam (New York) was one of five "head farmers" first sent by the Dutch West India Company to New Netherlands in 1625. Wolphert came with his wife Aeltge Jans, whom he married January 17, 1605 in the Dutch Reformed Church of Amersfoort, and their three surviving sons, Gerret, Jacob and Pieter. Until his return to Holland in 1629, Wolphert farmed Bouwerie (farm) No. 3 in New Amsterdam and, through his wife Aeltge, engaged in the profitable fur trade.

While in Holland, Wolphert signed a six year lease with the Dutch West India Company for Bouwerie No. 6 (about 91 acres). He also contracted with Kiliaen Van Rensselaer, patron of Rensselaerwick (comprised of thousands of acres along the Hudson including most of present day Albany) as a factor or director and also to be in charge of Bouwerie No. 7 inNew Amsterdam. All this bore tribute to Wolphert's reputation for competence and dependability. Upon his return from Holland May 24, 1630 on De Eendracht (The Unity), Wolphert farmed Bouwerie No. 6, and for about two years served under his contract with Kiliaen Van Rensselaer.

On June 30, 1636, Wolphert was one of five men allowed to purchase land on Long Island called Keskateuw from the Indians. Here was established the first known white settlement on Long Island. Wolphert called his "plantation" Achterveldt, shown on the Manatus map of New Netherlands as Farm 36, near the Indian long house of the Keskateuw tribe. Wolphert's house, surrounded by palisades, was the focal point of the village of New Amersfoort (later called Flatlands). He and his sons farmed the 3600 acre Achterveldt until Wolphert's death in 1662.

Of Wolphert's children, the eldest, Gerret, born about 1610, was especially close to his father. They were both farmers at heart, and shared houses across the road from one another within the palisades of Amersfoort in 1639. He married Aelte Cornelis Cool in about 1635. Stiles says they lived "on either side of the road that led from Flatbush to the Ferry, later Fulton, Hoyt and Smith Streets in Breucklen." In 1643 Gerret was one of a group sent to the Staats General in Holland to present the forlorn and defenseless condition of New Netherlands settlers due to Director Kieft's inciting war among the Indians. Sadly, in 1645, Gerret died, a young man, a great loss to his father.

Wolp hert's second son, Jacob, born about 1612, was taken into the Dutch West India Company by Governor Van Twiller and became a tobacco planter and brewer. Jacob married Hester Jansen in Amsterdam, Holland, on December 1, 1636 and they were parents of six children. In 1643 Jacob and David de Vries volunteered to go to the Rockaway Convention to spend the night with the Indians to make peace. Ever the businessman, Jacob was an "inveterate speculator," determined to build the largest brewery in New Amsterdam. He was forced by the Schout in 1656 to sell some of his properties to pay his debts. Nevertheless, Jacob was a respected leader in the town, being named for three years on of the "Nine Men" whom the Dutch West India Company let help rule the settlement. In 1664 he was licensed by Governor Nichols to trade in his sloop with the Indians along the Hudson River. On July 3, 1643, the West India Company granted land to Jacob in Brooklyn on the East River including what is the Brooklyn Navy Yard, City Park and the Fifth Ward. In 1649 and 1650, under Peter Stuyvesant, Jacob was a member of the Court of Arbitrators. In June of 1649 Jacob was sent to Holland as one of three men to represent New Netherlands at the Hague. Jacob lived until 1670.

Pieter , youngest son of Wolphert, was a miller and brewer. His brewery was at what was later the corner of Pearl and William Street, New York City. In 1640 he married Hester Symons. After New Amsterdam was incorporated in 1653, a court of Schout (Sheriff), Burgomaster and Schepens (Sheriffs or Aldermen) was established. On February 2, 1653, Pieter and four others were appointed first Schepens of New Amsterdam, an office he held for ten years. Pieter was one of two Orphan Masters who received the first appointment to sit in court from October 19, 1655 until 1660. In September, 1655, Pieter was one of three men who negotiated with marauding Indians for return of Christian captives. In 1663, as Lieutenant, he was sent by Stuyvesant to retaliate against the Indians of Esopus (now Kingston, New York). On March 12, 1665 he was appointed City Surveyor. In 1665 Hester died. Pieter was the first of Wolphert's sons to move to New Jersey. That year he married Aeltge Sibrants and settled with her in Elizabethtown, New Jersey. He died after 1700.

Peter Cownover, son of Lt. Pieter Wolphertsen Couwenhoven, was the first of the name to settle in southeastern New Jersey. His deed for land in Great Egg Harbor is dated November, 1695. Peter Cownover's sons, Peter and John, were among the first owners of Absecon Beach, now Atlantic City, New Jersey. Grandsons of Gerret - Cornelius, Albert, Peter and Jacob - settled in Monmouth County, New Jersey, about 1700. Another grandson, William, remained in the Flatlands. Well into the twentieth century the Kouwenhovens of Flatlands wrote their name in full but were referred to among themselves and by neighbors as Conovers. In New Jersey there were many variations. While Cowenhoven and Covenhoven were prominent, we find such spellings as Couenhoven, Kovenhoven and Cr(K)ownover. Three stones in the Conover-Schenck cemetery, Holmdel, New Jersey, show John Kouenhoven, Cornelius Conover and Christopher Kovenhoven, sons of Cornelius A. Covenhoven!
http://www.vankouwenhoven1625.com/found ing.html
Van Kouwenhoven-Conover Family Association