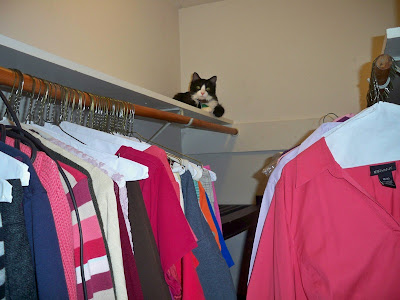 Cool moth we found outside out apartment.... 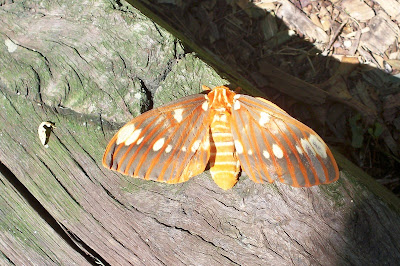 Our living room full of boxes... it's getting better but still... ugh... so much to unpack or repack into smaller containers. The textile restoration people gave us these huge boxes that have about 8 pairs of shoes in each. I'm could fit 80 pairs of shoes in them. (but I won't). 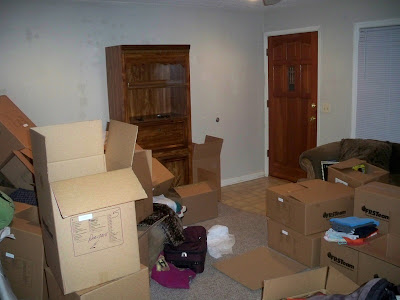 You can sort of tell how big my master bedroom is by the fact that I have two windows... LOL!... and the fact that there is so much room at the end of my bed. I have a nice tv stand now instead of the two stools I was using so we're going to be able to have 3 stools around the table instead of one. 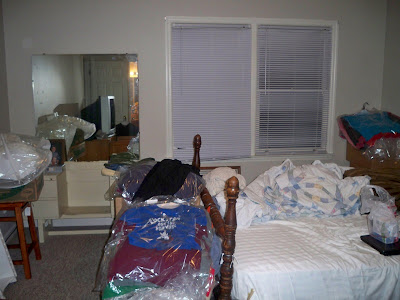 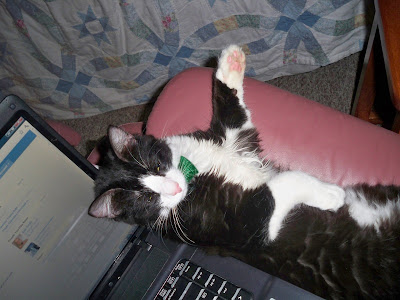 I'm so glad I whine in my blog from time to time because it helps me go back and see the problem, remember the intensity of my emotions at the time and then bask in the glory of the resolution. I was looking back over some of the lists I made over the past few weeks of things that needed to be done and I almost want to jump up and down in pure joy at the realization that I DID IT! My broken down, pain riddled, discouraged self did what I didn't think I could do and that makes me feel ten feet tall and bullet proof.

I don't like change. I very much liked where we lived, other than the burden it placed on my budget. I signed the lease before I even had a job or knew how much money I was going to make. It was a struggle - always a struggle. Most of the time that I lived there I was behind on the rent and my landlords were patient with us when we could have very easily been out on the street. At the time of the fire they didn't have any other units available and although it would have been easier for me to be in the same floor plan, same neighborhood, dealing with the same people etc, etc, I don't believe that's what God intended for us.
Austin loves this little neighborhood. Every afternoon when I pull up from work, I find him hanging out with the handy man and our next door neighbor... just one of the guys, hanging out... I love so many things about this place... it's got less storage space and it didn't come with a washer and dryer, those are the biggest downfalls... so I'm having to be creative about putting things away but... it will come together. The washer and dryer are next on my MUST GET list and I've been pouring over craigslist looking for a used set but honestly... I'm so fearful of craigslist and don't want to buy something to have to turn around in two months and buy something else.
There are times I still kind of catch my breath and think, "did I do the right thing? should I have looked longer for something even cheaper or something with more space, etc, etc" I think that's one of those big pitfalls of being single, that you don't have someone else to bounce things off of and to help make these kind of big decisions. You don't have anyone but yourself to blame if things go wrong. But we're here... we're getting settled and slowly getting unpacked... I got the first insurance check yesterday and we're hoping to finally be able to get Austin's bed today. We're going to be able to buy some groceries and stock the pantry a little bit so we're not trying to figure out meal by meal what we're going to eat.... which is a huge pain in the tukas when you're ten miles out of town in every direction. (give or take a few miles)
I had a really rough day yesterday. Still having the dizziness... sick to my stomach... and yesterday I was feverish and exhausted all day at work. I had a nasty sore throat, lost my voice by lunch time and spent the rest of the afternoon having to repeat myself because no one could understand me. I'm coughing up junk so we're most likely back in bronchitis land which usually saps my strength and lasts for months. I limped through the day and then a client came in at 5:30 as we were trying to lock up and I'm thinking, "really???" but it was handled quickly and I was out the door by 5:34 and almost cried on the way home... so relieved to have made it through another day.
The heat is a big problem for me. I thank God that I live in an air-conditioned space... I haven't always... and I thank God for my air-conditioned car... I haven't always had a car with a/c. And there were times that I didn't have a/c in my car OR my house and it was pure misery. Every time I pass someone outside working in this heat I say a quick prayer for them. It's not fit for man nor beast. But even though I'm in the cool comfort MOST of the time... there are those walks from the car to the office or the car to the store that make me absolutely swoon. Winter can't get here quickly enough to suit me. And since we're living at a higher elevation now, we have a higher chance for SNOW! They say that one of the storms last Winter trapped everyone in this neighborhood for three days because of the steep hill leading out.
Lish the cuddle bug is sitting beside me in the chair purring like a motor boat. He loves to curl up beside me and whimpers if I move away from him. He is exactly the kind of the kitty I needed. Stubby loves to get affection but he hates to give it. Lish literally puts one paw on either side of my neck to give me a hug. It's the sweetest thing!
We have a busy day planned and I hope to accomplish as much of it before noon as possible so that we can avoid the hottest heat of the day.

I know what you mean about the heat! Here in Texas we have had 100 + degrees for so long now and not much rain. Its dry a hot. The scorpions are coming in looking for water. Creepy! Most of the texas counties are under a burn ban.
I have a friend coming to visit that we graduated with. Soo excited! Hopefully the heat wont get to them.
My prayers are with you!!