This is the asparagus that is growing at my brother's house. I think it's really cool how it looks like a miniature forest. 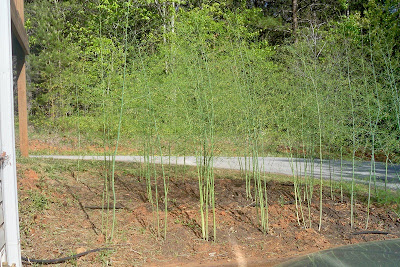 Hello Blogosphere!
I've been waiting for some kind of inspiration about what to blog about today and.... it just hasn't happened.
You think I'm kidding... I've really got nothing.
I'm watching Extreme Cribs on MTV. Waiting on a load of laundry to finish drying so that I can move it from the dryer to the pile of unfolded clothes in my room and... yeah.
It's really sad but I am a lousy housewife. I mean... in my case....it's an apartment and I'm not a wife... but you would think I would be keeping the Nest spic and span these days. Not so much.
I think I gave up at some point in the process. Maybe it was having three little boys. Maybe it was being married to men who didn't exactly validate my homemaking skills. Maybe I just don't care.
Honestly. The cats really don't care if the clean laundry is put away. I think they actually like it better if there's a big ole stack of warm clothes for them to snuggle into.
Trouble's little Honeycomb Hideout is a crockpot box that I put some newspapers in... I was actually making a trash pile to take out and while I was in the middle of the process he knocked it over and made a little cave out of it. He loves to hide there.
He also loves the sink. The kitchen window sill. The top of a box spring that is standing on end in the living room. Don't ask. Ok, I'll tell you... Austin broke his box spring... the one I bought after the fire last summer... by jumping on his bed. Yes, he is 18. Welcome to my world.
But today, at least, he's at school. Austin. Not the cat. The cat is too skittish to ever go out into the wide world. He's the opposite of Bitty's gypsy-wandering-furry self. Trouble is a homebody. Homecat. If that's a word. Not that I restrict my blog entries to the actual use of proper grammar, punctuation or real words. I do try.
My spine is doing it's best to remind me that I'm no longer able to spend the night on the bathroom floor. Not that I wanted to, you understand. I wasn't wearing my "I've fallen... and I can't get up" button. I mean, I could have gotten up. Except not. The point is that I think I pulled a muscle or aggravated something because I am having muscle spasms that could make a grown man cry. Bad enough, even, to make a grown WOMAN cry!
It has me sort of surly and snarky and uninspired. I look around... I think, "someone should make that bed... it's my bed... I'm not doing anything... I'll just go over there and... NOPE.... not making the bed". It's that kind of inner-dialogue. Pain just changes your "normal". Normally any person from 3 to 100 should be able to - at the very least - make their bed in the morning. My problem is that the payoff or the penalty has to be great enough to validate the amount of suffering involved. Most things in life... just don't hit those markers.
Few things, actually, hit those markers.
I've changed to the Price Is Right. The dryer stopped. Showcase showdown.
What should I have for lunch? I had tabouleh for breakfast. It was really, really good. It's been awhile since I made any and I was just making it when the ickies hit the other day. I also had a banana. Not with the tabouleh. Earlier. Before I took Austin to school.
I'm kinda bummed that they voted Sherri Shepherd off of Dancing With The Stars. She was doing really well, especially for a woman who is not built like a dancer. You know what I mean.
Did anyone see Jack Wagner on Anderson Cooper yesterday? He (Jack) had a daughter that had been given up for adoption and she tracked him down. It was a really, really sweet story.
I love Anderson, especially when he giggles. He is such a girl.
Got a few job leads... in case you were wondering. I'm sorta keeping the whole employment situation on the down-low because not everyone who reads my blog has my best interest at heart and I don't want to cost myself any opportunities.
Ultimately... the Lord brings the increase. I mean... everything in my life so far, no matter how challenging, has worked out for the best. Sometimes that *best* means that I adjust my expectations and that's ok. I'm sure all of us can say that we thank God for some of the "unanswered" prayers in our lives. Although, I believe all prayers are answered. They're just not all answered the way we would like.
Letsee... what else is new? I bought drano to get the hair clog out of the shower drain.
I need to get my hair cut in a bad, bad way.
I think I've decided on pasta for lunch.
And... that's my Wednesday.
Hope you have a great day!

well lets see. i am going to admit something here...i don't make my bed..no one goes in my room except me...i never understood making my bed...i'm only going to mess it up later anyway...now if i had company ;0 that's another story LOL..happy wednesday....ps i am thinking of a trip down south in july...i should visit you--it's been a LONG time!!

I don't honestly think I could sleep in a bed that had not been made up. I just like things right. I still made up my bed when I was in a wheelchair after I broke my ankle. It is just a thing with me.