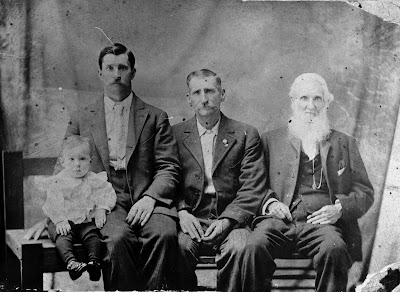 This was supposed to be a Father's Day post but it took for-blooming-ever to put it together and then I found the story about the murder of Rebecca Cornell and I HAD to share that first. (see previous entry) These names may not mean much to you (or you might find a common ancestor, how fun would that be?!) but I think it's fun to see how the list grows - even though I'm missing some of the names in the last group.  I think it's particularly interesting to see how many of my forefathers were from New Jersey, although our contact with that side of the family was absolutely non-existent so other than liking Bruce Springsteen and having a few friends from there... I'm no Jersey Girl. I do have a few ancestors who lived, at least for a time, in Canada, eh. I haven't been able to confirm the line that goes through the mother of my Steel Magnolias, however, although I found photos of the people that I *think* are her ancestors and she looks just like them.

At any rate... even though this just looks like a long list of names... I think it demonstrates how vast and diverse just ONE person can be!

Father
My dad is Jim Gant, born in 1949 Georgia

Grandfathers
Bruce Gant, 1924-2000  born in New Jersey, died in Illinois.(I never met him)
C.B. Pennington 1908-1978 born in Kentucky, died in Georgia
He died when I was ten. I loved him dearly and still remember how he smelled: like sweat, cigarettes and earth.

Great-Grandfathers
Theodore S. Gant 1884-1951  born and died in New Jersey
Charles Pelham Ward 1870-1939 born and died in Georgia
He was a doctor and had an office in the Flatiron Building in Atlanta. My grandmother was 16 when he died.
William Judson Pennington 1878-1962 born in Missouri, died in Arkansas
Luther Vaden Jackson 1881-1966 born in Mississippi, died (I think) in Tennessee

Hi Heather, we both descend from Esek Gant...I believe that makes us distant cousins. He was my 3rd Great Grandfather.

So happy to hear from you! I think that would make us 5th cousins. I have never met any of my Gant ancestors as my grandfather was estranged from the family when my dad was very young. Which of Esek's children was your ancestor?

We are relatives, and I have photos of your Great-Grandfather Luther Jackson and Great-Grandmother Mary Alice Jackson on my Ancestry.com tree.

Luther and his brother Abb Jackson married sisters, Mary Alice and Alma Ray. The girls' father T.A. Ray's farm was next door to the Jackson farm in the Midway Community of Leake County, MS. TA Ray was a founder of Midway Baptist Church, and many of his children (including his daughters) were founding members. Midway Baptist Church, which was built on land donated by TA Ray, has the graves of babies born to Luther and Mary Alice; she had many still born and/or children that died within days of the birth. My mother always suspected Mary Alice had diabetes.
I am the grand-daughter of Rosa, the youngest daughter. I have very clear memories of Uncle Luther and Mary Alice visiting Midway and staying with Uncle Abb and Aunt Alma. I went with Luther and Abb to see the remains of the original family log cabin, which was falling in at that time (this would have been around 1962 or so).

The Jacksons and Rays and Aldermans (TA Ray's wife was an Alderman) were firm friends, since that part of Leake County was settle by them (TA Ray and D. Alderman staked claims on the land). TA Ray's land is now owned by a lumber company, but the Jackson land is still being farmed by other Jacksons (probably a brother of Luther and Abb).