Trouble and His Tings 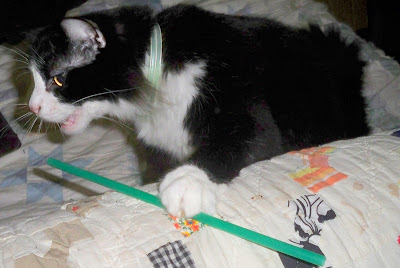 I think I've mentioned a time or two that Trouble the Cat aka as Little Kitty has an affinity for straws. 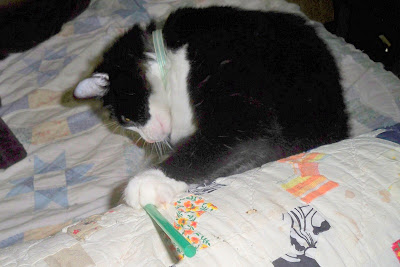 This is no exaggeration on my part. The cat is simply nuts about straws. I refer to them in Kitty-Speak as "your tings" which, translated into (American) (Southern) English is "your things". As in, "my got your ting" means "I've got your thing". Because, you know, he doesn't know what the word "straw" means. 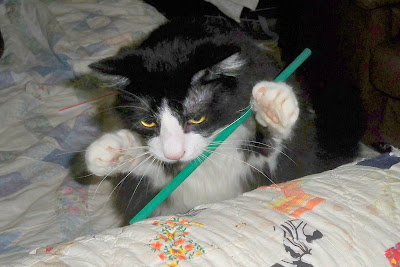 He drags a straw with him anywhere he goes and he has amassed quite a collection since Austin and I are partial to McDonald's tea and various Starbucks drinks. We drink a lot of stuff through straws here. This is a Starbucks "ting", from Austin's iced caramel macchiato that he bought the other day with his gift card that his dentist sent him for graduation. 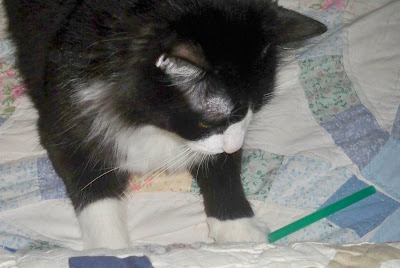 He has about a hundred straws. Well, at least a hundred because I bought a pack of 100 the other day and they're all in his cat bed. Or, well, most of them are. There are four or five on my bed, a few in the bathroom, one in the hallway, one or two have migrated into the kitchen. 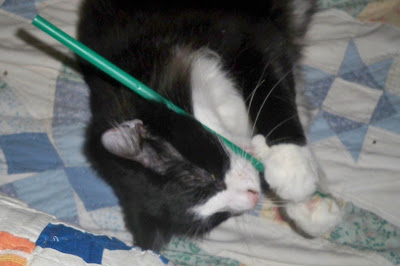 I think this particular habit is unique to Trouble because Stubby couldn't care less about the "tings". He doesn't touch them. 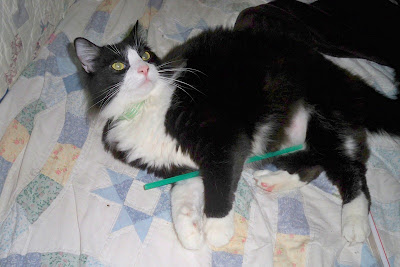 But it might be that he's afraid to go near them because Trouble is s territorial with his "tings".

Other than taking pictures of the cat... today I picked up a few things at the grocery store... picked up a few things at the bakery... got a shower... realized that Austin hadn't gotten down any of the things I asked him to get down from the top shelves in the kichen... put pork chops in the crockpot and played a few rounds of Bubble Safari. I'm stuck on level 29 and it's driving me nuts.