My Current Project and A Lot of Pictures

I have spent most of the day working on a biography of my grandmother for her 90th birthday. She is (was? I don't know how much writing she's doing now) a prolific writer and most of her archives are here at our house. In my Whine Cellar. Just waiting to be transcribed. It's tedious work as most of things are written by hand and her handwriting can be difficult to read. Not as difficult as my dad's which is neat but microscopic...  but difficult enough that I needed the bright overhead lights on to be able to read it. I'm trying to write her story in her words as much as I can which, I really hope, she will enjoy. Especially since most of her treasures are here with us and not with her in the restricted space she has now. I thought it would be nice to have a little book that she could share with her friends. I also hope it will be something future generations will enjoy.

I also hope I can get it finished and printed before her birthday party early next month. It's a big job but ... what else do I really have to do? I am about 25% of the way through so I feel like if I can keep my nose to the grindstone, I can get this finished this week which will leave enough time for it to be proofread for content and accuracy (by Pop) and for spelling and grammar (by my sister-in-law, Dr. Gant). I'm using Shutterfly to format it so it's a fairly easy process... once I have the text selected. The biggest hurdle today was in sorting through stacks of documents to see which I wanted to use. It's just a matter of being able to have a quiet place to work without interruption and I can churn it out. I hope.

We're having a bit of a technology crisis here, though. My mom's laptop has been hit with a virus and my scanner isn't working. I have a lot of old photos already saved thanks to my scan-a-thon last Summer while I was staying with grandma. I discovered many, many more that I would like to include in the book, though. So we're taking mom's computer to the repairman tomorrow and shopping for a scanner. We use our laptops here for tv watching since the only tv is in the living room. And Austin's room, but that doesn't count because nobody wants to go in there. Computers are important here.

I said all of that to say that I don't have a lot to say today because my creative juices have been wrung out. I do have a lot of pictures - not all of them of cats - to share. Also, I want to mention that I made an awesome huge batch of chili yesterday and today I made chicken enchiladas for the first time. I may not cook again for a month. Heck... I may not EAT again for a month! I want to tweak a few things in the enchilada recipe the next time I make it but it was good enough that Lily, the old arthritic dog who has maybe been down the stairs here ONCE in the whole time we've lived here followed her nose downstairs looking for whatever I was eating. I left her more than a few scraps. That was a lot of work.

Ok. Picture time! Hope you all had a great weekend! Love and hugs! 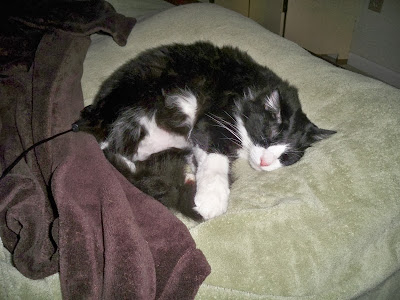 Little Kitty curled up at the end of my bed. 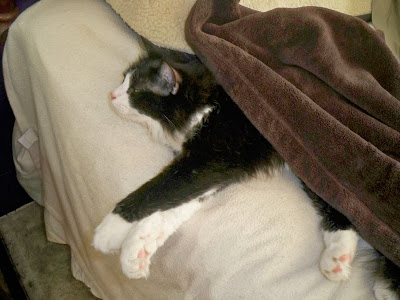 Little Kitty sleeping UNDER the blanket with his little head beside/on my pillow. He starts the night at the foot of the bed and ends up sleeping like a person. He also does NOT like it when I get up. Unless it's time for the cats to be fed and then he can't get me out of bed quick enough. 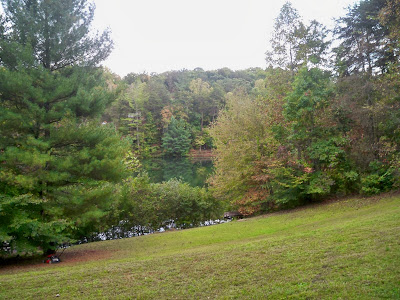 Right now the leaves are just barely beginning to change but there are enough changing that you can tell it's Fall. The lake is crystal clear. It's just so gorgeous!

This picture was from yesterday. 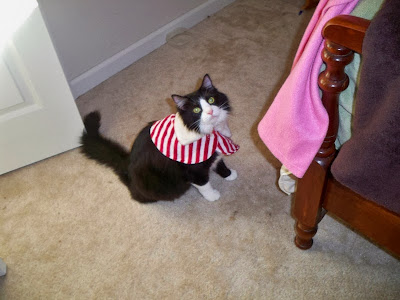 I found Stubby's old Christmas cape and put it on Little Kitty this morning. He didn't seem to mind. He sort of pranced around like he was special. 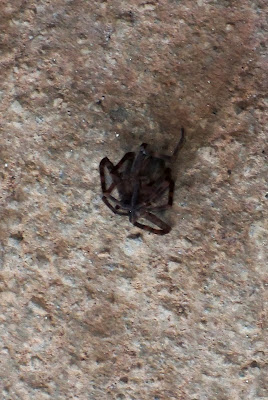 Would it creep you out to find this on your porch, a foot from your backdoor? I bet it would creep you out more if you found out that this creature was previously inside of your house and your child had thoughtfully dragged it outside so that you didn't freak out. 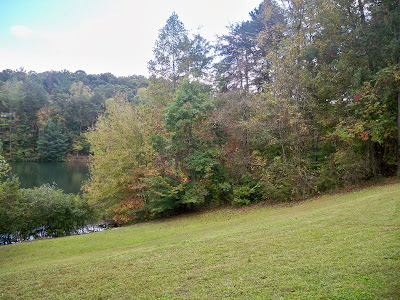 This picture was from today. You can't tell by the picture but a lot more leaves have changed since yesterday. You'll have to take my word for it. 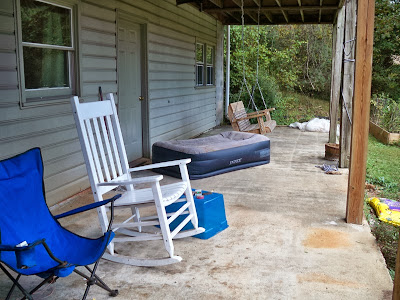 What? You don't have an air mattress on your back porch? 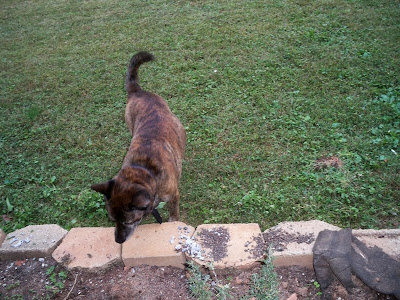 Lily after her adventure to the Whine Cellar in search of the whole enchilada. She's still very thin but I think she's looking healthier than she was two weeks ago. She has thyroid cancer so she's not ever going to be back to her robust old self but she looks good today. 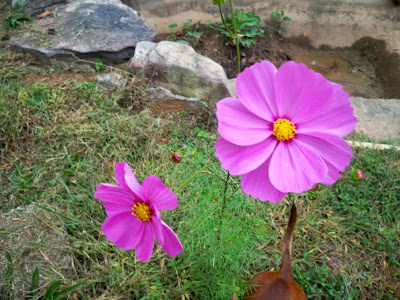 Austin planted wild flowers at the base of the fountain. This one was an over-achiever. 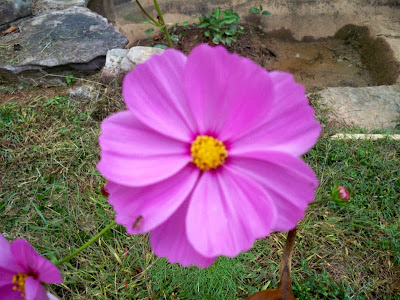 Notice Oscar's tail underneath the flower? 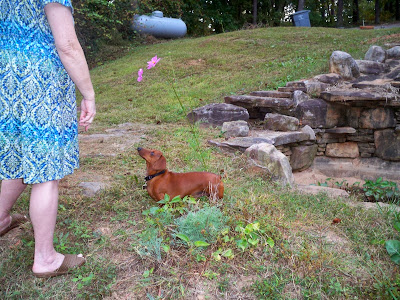 It's a really tall flower! 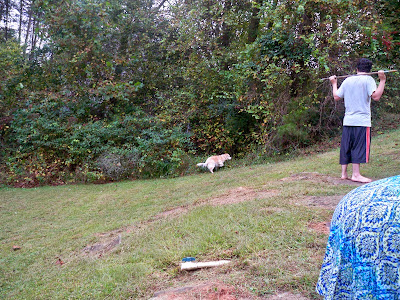 Austin walking the old girls up the hill. It's easier for them to go up the hill than up the stairs.
Goodnight, y'all!