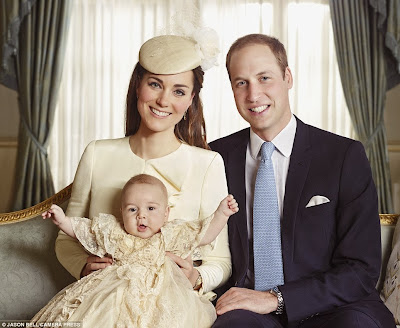 This photo from yesterday's christening of Prince George hit the media today. How precious is that boy? Am I the only one who thinks how sad it is that he will never know his amazing Grandmother, Princess Diana? Am I the only one who thinks it's amazing that Princess Diana could be a grandmother? I'm still stunned that people I grew up with are grandparents. I guess since I was a mom before most of my friends, I assumed that I would be a grandmother first, too. Not that I mind the wait. I'm really not in a rush. Everything in it's due time.

Austin spent the night away last night so I was alone in this big house by myself all night and most of the day today. It doesn't really bother me to be alone. I sorta like it. Logan stopped by this afternoon to pick up his phone charger and we had a long talk. The gas men came to fill the propane tank. The trash men came. So, even when you're alone out in the middle of nowhere, you're never really alone. Especially if you have high maintenance cats.

My food fascination of the week is instant mashed potatoes. Comfort food. It's cold out there, people! I've also shifted from my constant cup of juice over ice and am now enjoying hot tea and hot chocolate. I quit coffee earlier in the summer and I haven't missed it yet. When you don't have to get up until you want to get up, you don't have as desperate of a need for coffee. Who knew?  We're also beginning the eggnog season early and I bought real nutmeg to grind over it. It's one of those love 'em or hate 'em dishes and for me, it's true love.

Speaking of true love - where are my readers falling on the Kimye engagment? (Kanye West + Kim Kardarshian, for those who aren't in the know on such things). I pretty much abhor Kanye and see him as a narcissist who could easily cross over to abuser. I say, "take the baby and run, Kim". I did enjoy Golddigger, though. My favorite song of that ilk. Kim, to me, is just a phase. Sure, she doesn't really DO anything but she's carved out quite the celebrity for herself by doing nothing so I've got to respect that in the smallest, tiniest way. She's more notorious than famous but... whatever. I'm fascinated by the dynamics of that kind of blended family but I'm sure much of what we see on their reality shows is scripted. Fact or fiction, it's an interesting story.

Today has not been a bad day as far as back pain is concerned but I'm having sort of a fibromyalgia flare in that I keep feeling fluish and really run down and have random aches in places that don't usually ache. All of this could be attributed to other things too but just like my doctor told me when he finally diagnosed me with fibro - it becomes the reason for everything. Today it's sore throat, headache, the flu-ey thing I mentioned before and... yeah. I just don't feel good. I even contemplated taking a nap and just couldn't do it. I also thought about an early bedtime but I want to see the new Grey's Anatomy.

I'm trying to keep this blog fresh... I've been using this format for Five YEARS now and I've been blogging for nearly nine years. I enjoy giving the daily recap... I also enjoy pontificating on subjects that interest me. I had a conversation yesterday that enlightened a reader as to how much of my life's drama I DON'T share. I try - I'm not always successful but I try to keep the blog restricted to My Story without sharing something that someone else in my life might not want me to share... and I try to say things in a way that wouldn't be offensive to people I knew read here. A lot gets censored. So while confiding in a trusted Mother Hen yesterday she was surprised at how much goes on behind the scenes that doesn't make it here. There's a whole lot more crazy below the surface! I'm not going to change THAT aspect but I would like to share stories with you that you might find interesting. Would you like to hear about my college years? Also known at the time that I was a working mom with three kids - of course I didn't go to college! But those were fun years nonetheless. How about my time working in theatre? Some of the behind the scenes secrets that can be revealed. More about family history? More about the characters that make up our huge, diverse family? If there's anything you want to know more about, just let me know.

And now I'm ready to tuck into bed. I may not make it all the way through Grey's but I'll give it a shot. Happy Weekend-Eve, y'all! Love and hugs!

I would love to hear more about your time in the theater and as a young Mom.