Some Fall Photos and Halloween Stuff

Happy Halloween! No trick-or-treaters here at Cedar Hollow as our driveway is steep and dark and there are no kids that live back this way. I'm down in the Whine Cellar looking at all the Facebook postings of my friends kids and grandkids in their cutie-patootie costumes. Here's a picture of my nieces that my sister-in-law just posted: 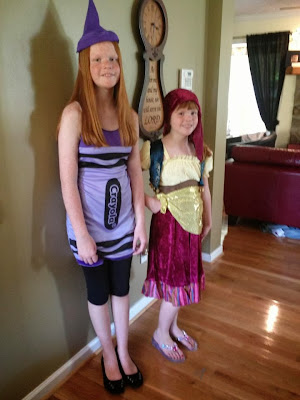 Sarabeth is a purple crayon (which Jamie clarified to "wisteria crayon, that's what it says on it." because Jamie is a Gant and we must always be as literal as possible) and Jamie is a gypsy. She wanted to be Esmerelda (from The Hunchback of Notre Dame) but it being an older Disney release, there weren't any Esmerelda costumes out their so she amended it to gypsy. Of course, Aunt Heather had to go into a long story about the Roma people and how hard their lives are and how I had seen an article about the poverty and illiteracy among them. Because, you know, just being a plain old gypsy wouldn't be enough. She has to really understand her role. Sarabeth just likes purple. Notice how long her hair is? We took another vow the other day not to cut our hair. I don't know how much longer I'll make it because mine is so dry. I don't mind the little bit of gray but I hate the texture. Hers of course is gorgeous.

Anyways... Halloween... what great memories... when the kids were little we lived in a mega-subdivision that had so much trick-or-treat traffic that you just camped out on the porch and hoped you didn't run out of candy. It was a constant stream. When I was selling Avon (yes, I used to sell Avon and I actually made a little money at it) I would hand all the moms an Avon book and some samples and I got a good bit of business that way. I heard someone on tv talking about a neighborhood where they hand out candy to the kids and fill the parents wine glasses as they walk along. Sounds congenial and neighborly and all that but I'm not sure as a mom it would be a good idea for me to be in charge of excited young children who are hyped up on sugar if I'm a bit woozy.

With three kids we went through a lot of Halloween costumes over the years but honestly, I can't remember most of them. What I remember is the stress of trying to afford all the things the kids wanted and always being that loser who was at Party City the day before Halloween trying to find something that my kids and my budget both agreed on. Probably the most memorable costume was the year that Ryan went as the Unabomber. He was nine. Always on top of the news, that one. It was a simple costume - a hooded sweatshirt and sunglasses.

We've had three family members over the years that got attached to a particular costume and wore it all the time - not just at Halloween. First was my brother Michael who WAS the Lone Ranger, complete with mask and cowboy boots. (That's not embarrassing for an adolescent - going out in public with a little Lone Ranger clone).

My brother Bryan wore a cat costume for what seemed like years. He had the whole meowing and eating on the floor with the cats thing. Although now we have the cats' food on the dining room table - because we don't eat there and it keeps the dogs from eating their food. Being a cat would be much easier on him now.

Austin was attached to his grim reaper robe which was a little creepy in and of itself - but then the son of a good friend of ours was tragically killed in a game of Russian Roulette. We left Austin at my mom's while we went to the funeral which was, as you can imagine, a very emotional and sad situation. Then we pull in mom's driveway to pick Austin up and he runs out the door in the grim reaper costume and - we just lost it! The irony was too ridiculous for anything but laughter. And as we all know, "laughter through tears is my favorite emotion." - Steel Magnolias.

I made a trip into town this morning not really because we needed anything but more because I needed to get out for a bit. The leaves are finally becoming colorful and I took a lot of pictures as I drove. They aren't great quality because the only way to make them not blurry is to take the picture from straight ahead, looking through the windshield and my windshield is pretty dirty. Still... what I lack in content I make up for in pictures so here goes - hope you enjoy! Have a great Halloween, y'all! 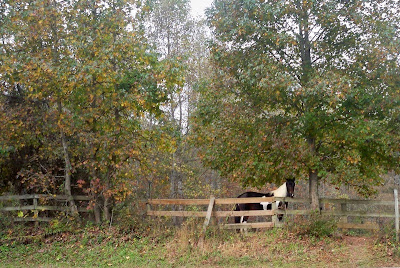 the horse at the end of our road. 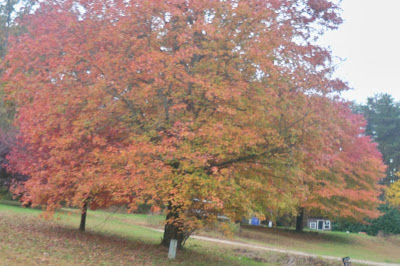 These colors are starting to come out more just over the past two days. I've got to get back out and about tomorrow to enjoy a little more "color" before the weekend. This will probably be a big tourist weekend. 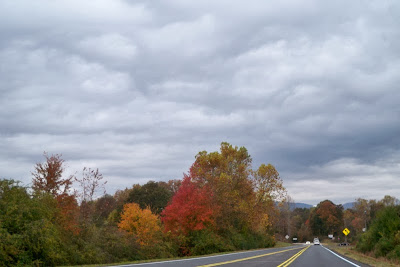 The road is loooong... 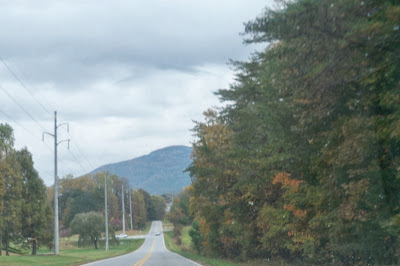 You can't really see a lot of color on the mountain yet... still to come, I hope. Some years we have really vivid colors and sometimes not so much. It seems like I remember that the color is brighter in years of drought for some reason. This was the wettest year in my lifetime so I guess it's possible that we won't have a true "peak" of color. 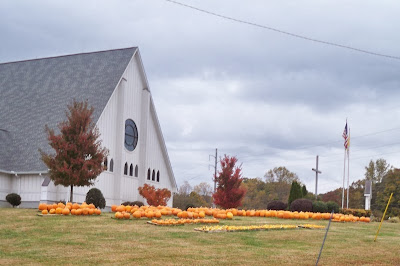 The pumpkin patch at the Catholic Church. I know I've shared this already but I still think it's one of the best fall scenes around here. 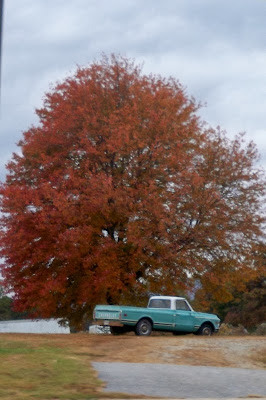 The old truck with the sort of muted color of the tree made this feel like an older picture to me. 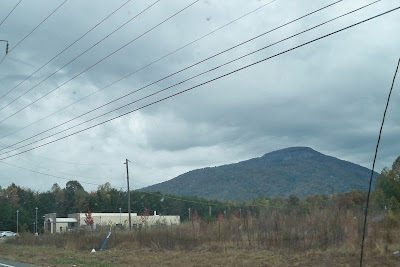 My doctors office with the mountain in the background. If you get put in one of the patient rooms in the back of the building, you get to look out at this while you wait. Honestly, it doesn't make the wait any better. 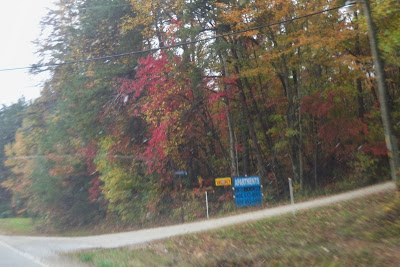 Our old drive to our old apartment. That place was a bit rundown and I certainly went through a lot physically while we lived there but it was always a pretty view and so very quiet. Not as quiet as it is here on the lake but quiet. 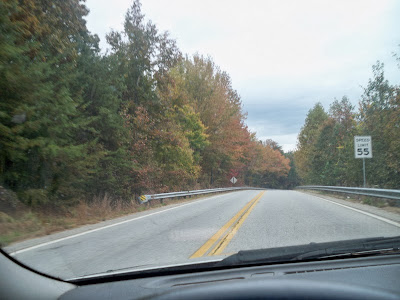 In this little stretch of road there is one tree that is always the most colorful of them all. One day when we were driving I said to Austin, "look at that tree"... because to me it was so obvious which one stood out among the forest. Austin, because he has a double dose of literal-ness (not a word) being both a Gant and having that whole autism thing going for him was flabbergasted that I would expect him to know which tree I was talking about and still, to this day, many years later, will frequently make the comment as we drive by this spot, "look at that tree". It's our thing. 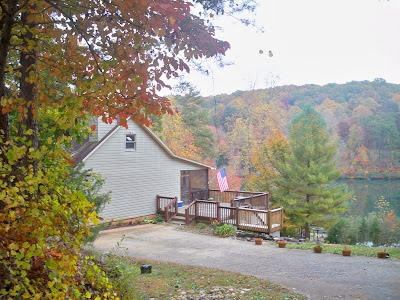 Last but not least... the view as I headed down the driveway this morning. Never grows old.

Happy Halloween to you!
Some great pics. Thanks for sharing.
~m :)