My Weekend and Another Episode From The Vault

And... *blink*... another weekend dashes by. I'd recap it for you but it looks pretty much like this: 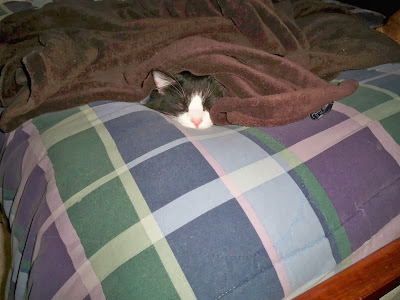 Actually. There are a few things new around here.... 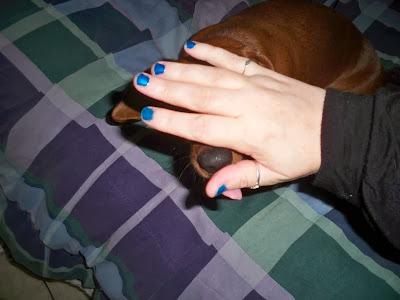 A DIY blue manicure for me. Note to self: don't try to take a selfie of your hand when there's a friendly dachshund nearby. Oscar is licking my thumb here.

As you can see, I'm a nail biter. I found the nail polish for a dollar at Dollar General this morning and thought it might deter me from biting my nails for a bit. It was also something different. I've never done any nail color except traditional pinks and reds and so forth, even when I used to keep acrylic nails.

That was back in the season of life where I believed that you could weigh as much as you wanted as long as you did your hair and makeup, kept a good tan and had acrylic nails to deflect from the excess poundage.

Not that I bought this nail color to deflect anything. I'm beyond that stage. What you see is what you get.

I also have a new (to me) comforter on my bed. I have been so desperate for something to tie in the purple wall and sage green curtains and new bedding is not currently in the budget. This old thing is so old that it was previously used to block out the light in Austin's old room and was one of the few things in his  room that survived the fire. True story. It's a relic. And it will do for now. 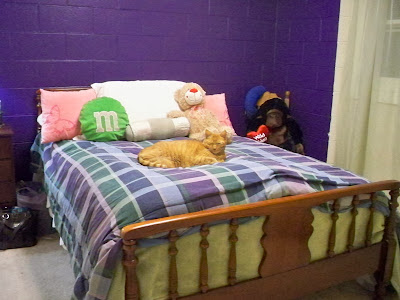 The weather has been unremarkable. I haven't cooked anything interesting this weekend because we've had plenty of leftovers... but I did take this picture last week and have yet to share it. We call these "english muffin pizzas" but they really don't taste like pizza. It's just a very thin beef patty on an english muffin, topped with a stewed tomato, a little ring of bell pepper and parmesan cheese, drizzled with olive oil. The olive oil really makes a difference. Austin loves these and it's a good way to stretch a tiny bit of meat. 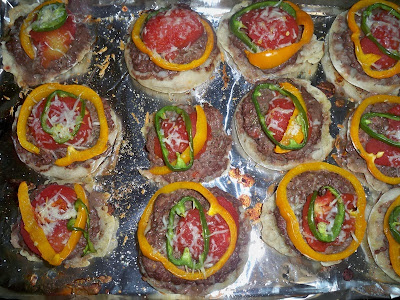 They are quite tasty.

I just finished watching The King's Speech so I'm typing in an English accent. I have this fun habit of not watching a movie when it's in the theatre or when comes out on video or even when it's on cable. I love to wait until all the buzz has died down and then there's this great movie just waiting for me to see it. I do the same thing with tv shows. More fun to catch things on the downswing, don't you think?

Ok. More from the vault. This time I'll share some of my Teen Mom memories with you.

Ryan - who we all, to this day, still call "BooBoo" or "Boo" for short - was my practice child. My starter child. My guinea pig. How he survived at all is a testament to God's grace over our family. I was 18 when he was born. His father was 17. When we first got married (before Ryan was born) we lived with my husband's mother who was (and still is, I presume) near about crazy. Not fun crazy but a super sized episode of Hoarders crazy. Her husband died in Vietnam in 1969 and when I married her son in 1986 she still had every article of clothing, every book, anything Papa Ned had ever touched still in that house. People say she raised Robert with a ghost.

Anyways... she also expected us to pay 2/3 of the household expenses since we were 2/3 of the household. This was particularly difficult because her son was still in high school and I was the only one working at that time. She was already on disability by then (I think she was about my age now, come to think of it). I was super sick with morning sickness and getting to work was a hugely uncomfortable ordeal and then I had to turn my entire paycheck over to her for us to have one tiny little bedroom and a shared bath. No thanks.

Then we moved to my parents house which was crowded but cheaper. When Ryan was about five months old we moved to an apartment that was so crazy run down - it was $330 a month but it had a huge mold problem and he had bad asthma. We didn't last long there. After that we moved to Stratford Arms which was slightly nicer, right across the street from my parents. Stratford Arms were townhouses - you know, because every young couple with a toddler needs to live in a house with stairs. We not only had stairs in the apartment but also leading up to the front door was a steep set of concrete stairs. I was afraid to go downstairs by myself when Ryan needed a bottle at night so I would make his dad go fix the bottle. He wised up and started fixing a cooler with bottles to bring upstairs at night so he didn't have to go downstairs.

I worried myself sick about Ryan falling down those stairs in the apartment - which he did, a few times. But the worst was the day he tumbled down those concrete stairs in front of the house. Poor kid hit every step while I stood there screaming like I had lost my mind. It went in slow motion. I ran to the bottom of the stairs expecting him to be knocked out and half dead or at least screaming and instead he looked at me and said, "Mommy said, Oh my God, Oh my God, Oh my God". Which was indeed, about what I said. I don't think he even cried.

In the movie Fried Green Tomatoes there's a line where they say there's a separate God for children. I think there's a separate God for children who have children. Ryan was such a sick baby. He got sick at six weeks old and I don't think he was well until he was 12 years old. I can't tell you how many nights I spent sleeping on the floor beside his bed to make sure he was breathing and then he started smoking as a teenager. All that time I invested in those lungs! He had pneumonia time after time after time. His baby and toddler years were one big blur of sickness.  His resistance was so low he had to go once a month for intravenous gamma globulin treatments. We would sit in a little room for three hours while he got his treatment. He was such a pro at it. At three he would tell the nurses, "you can use this vein here but this one... it's got a little valve in it and it won't work well".

Ryan was born grown. He had a serenity and maturity about him that made you feel like he had done this before. He's one of those kids who makes you believe in reincarnation (I don't really believe in it). We didn't have to worry about him breaking anything or getting into poisons or trying to put his fingers in a socket. He just knew what to do and what not to do.

I've always said that it wasn't hard to be a teenage parent. I knew how to handle babies because I had little brothers. What's hard is having wisdom and life experience enough to parent a grown person when I'm still figuring things out myself.

So there you go... a few tales from my own edition of Teen Mom.

Hope your weekend was good. Love and hugs, y'all!