So many thoughts today... no logical order of things. This entry brought to you by Better Living Through Pharmaceuticals. I hate them but today has been one of those days that I am so grateful to have access to some sort of relief.

Where to start? Obamacare? Government shut down? Weather? My unbelievably miserable pain? I'll cover them all and include photos of Austin's room throughout.

Ok, Obamacare. I understand the healthcare.gov website is crashing. I also understand that I'm below the income level of being fined for not having insurance. Has Obamacare changed my life or improved my standard of medical care? Am I receiving my "right" to health care? No. Not yet. Those meds I took today were one hundred percent paid for by me. My plan is to go to the local DFCS office and see what kind of information they can offer me. Maybe tomorrow. I just can't get behind any law that is passed with the kind of obnoxious statement Nancy Pelosi made, "we've got to pass the bill to see what's in it." that's dangerous pool in my book.

Government shut down. Instead of starting with the hard working folks with government jobs losing their paycheck, why not start with the folks who are failing to do their job by passing a budget? Seems to me that if they were missing out on the cash they'd be a lot more likely to find common ground.

The fact that Obama is more willing to deal with the Muslim Brotherhood than he is with the Republicans in Congress says a lot about what's wrong with our country.

I know of a few people who have been furloughed. A friend got notice that his son's pre-k (which I thought was funded by the lottery in Georgia) may have to close if the shut down continues past this week. I'm bothered by the thought of our military not receiving pay or benefits. I don't understand the concept of "non-essential" employees. If you're not essential, why are you being paid? I'm a big fan of National Parks and it's unfortunate that they would close. I just believe there is so much government waste. Our priorities are out of whack. Help those who can't help themselves. Give a hand up instead of a hand out. Don't create generation after generation of people who are dependent on the government. The people who are receiving have no incentive to achieve and those who are giving up a large portion of their paycheck lose their incentive to achieve. We become a nation of underachievers.

That's out of my system now.

In good news... we discovered today that Papa's Pizza delivers to our house. OH! Happy! DAY! Austin had two friends spending the night... Logan (who is here more than he's home) and their friend Sean. The two friends went in with me on the cost of pizza. We had a late lunch/ early dinner so I'm happy. No mess in the kitchen. All good stuff.

Yesterday when I took my nieces home after school we made a video of them doing the Cup Song. I posted it on Facebook but couldn't get it posted here. It's adorable. You should check it out. THEY are adorable. You won't believe how grown up they look. My favorite part of the whole process wasn't on the video. It was Jamie asking if I was going to put it on my blog. I started blogging the day after she was born. She knows Aunt Heather blogs and she knows she's one of my favorite blog subjects.

Also really funny... Sarabeth is having a birthday party this month for her 11th birthday. When she turned two she had a "Cow and Pig" birthday party- it was farm themed. She says that now she's having the 11 year old version of a "Cow and Pig" birthday - they're going to have bbq for dinner and bacon for breakfast. She's witty, that one. I told her I'd see if I could find some cow and pig themed snacks. 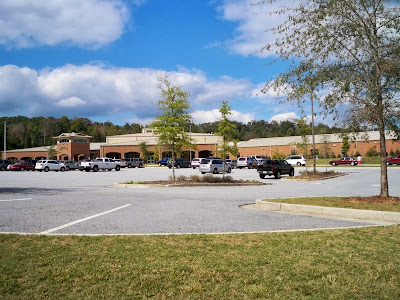 The weather continues to be absolutely perfect. Here's a picture of the clear blue sky and puffy white clouds yesterday while I waited in the car rider line at the girls' school. It was 52 degrees here this morning. Nice chill in the air... mist rising from the lake... just perfect.

Today was supposed to be grocery shopping day but I knew by the time my feet hit the floor this morning that I didn't have that kind of strength today. Instead I made a quick trip to the Dollar General for necessities (juice and cat litter) and decided we'd try again tomorrow. It would have helped if I had cleaned out the refrigerator yesterday. It was one extra step in the process that I knew I didn't have in me. Also... it was "must wash" day for my hair and too cool to head out the door with it wet. I needed pain meds and couldn't take them and drive. So when I added up all the steps - shower, dry hair, clean out fridge, shop, put away groceries - that had to be done while still in pain, I knew I had to hold off. It's not like we're OUT of food. We've got lots of ingredients... just not a lot of quick stuff and when I feel this way, it must be quick. That's what made delivery pizza such a happy, happy thing for me. 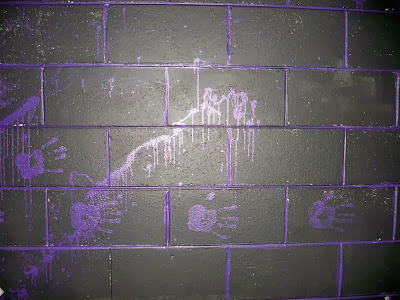 I think Austin's room turned out just fine for Austin. Personally, I think it could use two coats of the black but if he's happy, I'm happy. I went ahead and let him move my bed into his room. At the end of November we're moving a bed up from the old house for me. In the meantime I've got the bed on the top floor that we might just move downstairs if there's going to be a time span between the Whine Cellar being ready for me to inhabit again and moving day for the stuff from the old house. If the rightful owner of the bed I'm sleeping in (my cousin) comes to claim it, we'll move my bed back from Austin's room and let him go back to the air mattress. Confusing? It is for me too. My dad has a chart that outlines what bed goes where and when. I just know that my kid is back in his little nest and no longer littering up my Whine Cellar Living Room with his X-box Lounge and his Basement Clown Posse. 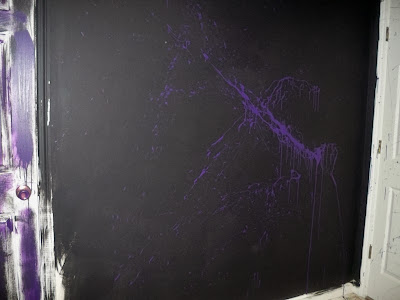 I am really fond of the purple we used, though and if my budget would allow, I would totally redo my bedroom that color of purple. I'm strongly considering painting the downstairs bathroom with that color but the thought of taping up all those fixtures (or supervising Austin doing it) makes my head hurt.

In cousin news... I literally have dozens of cousins... that's why there's rarely a day without a cousin encounter of some sort... I had a nice chat on Sunday with a cousin who is getting married next year. This is the only child of the Uncle that I worked for. We didn't really have a lot of chances to get acquainted while we were growing up...and she's ten years younger than me... but we had a fun chat. Facebook has connected me with family in ways that would have never have been possible otherwise.

My cousin filled me in on where Grandma's 90th birthday party is going to be held and good GOLLY Miss MOLLY that place is expensive! There's not a single entree on the menu under $20. I hope the cost doesn't keep people away because to me 90 is a big, big deal. I never go out to eat and I'll do this. It's gonna hurt like heck and it will hurt worse when the check comes but I'll do it.

And now I'm out of steam. Hope your Tuesday has been good. Hope this entry made sense. Thanks for stopping by. Love and hugs, y'all.