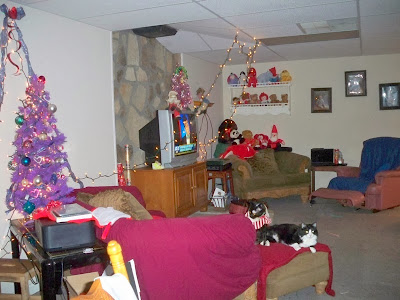 It feels like we've been working non-stop for a week but my cozy little Whine Cellar is taking shape. It's not Southern Living worthy... my budget and style fall a bit short... but it feels like home! Austin has been splitting time between helping me in the basement and helping Mawmaw on the main floor and top floor and he's had a great attitude through it all.

We still need to work on the kitchenette/dining area so no pictures from that corner of my world yet... and the stockings are not yet hung by the chimney with care but we're getting closer, we'll get there. 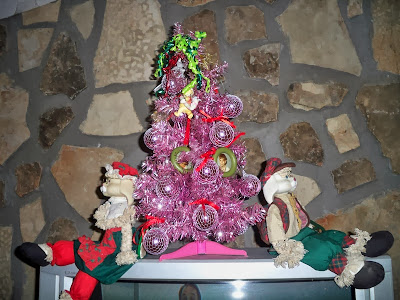 You can also have pink and purple Christmas trees... and trust me, both can convert to Valentine's trees with the removal of just a few ornaments. I found one really long strand of lights in the one tub of Christmas decorations that has survived and we decided to use them to highlight the trees and the hearth. There are more ornaments somewhere, I'm sure of it. I have the important ones, though, like the little pictures of me and my brother from when we were maybe 6 and 8 in those green little rubber rings. 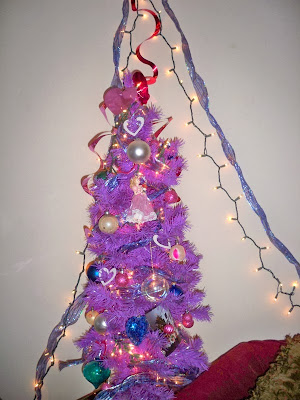 My Aunt Ginger bought me this gorgeous ornament - a little ballerina, Clara from the Nutcracker and she's holding a tiny Nutcracker. Speaking of... my niece Jamie is going to see The Nutcracker on a class field trip tomorrow and I'm uber jealous. I miss the days of my kids being in The Nutcracker. I need to do a blog entry of Nutcracker memories - at least the ones I can share - because trust me, Dance Moms were crazy long before there was a reality show about them.

Here's one little story for you... one year Cody's class was dancing in two numbers very close together. I think there was one number in between. If you've ever seen the Nutcracker you know that each number is about sixty seconds. We had to get kids out of the Mother Ginger costumes and into Russian costumes (or the other way around, I forget) in that one brief number. This meant that it was all hands on deck backstage getting these kids changed. I think we had about a half dozen mommies in a very, very small space helping with the change. The kids were maybe 2nd or 3rd graders - too young to handle a quick change by themselves. Annnnnyways... the side of the stage we used for their change was only accessible from an outside door and the pathway leading to that door was very, very dark as was the changing space. We couldn't use flashlights because we needed both hands to help the kids change so one of the moms had the bright idea of using those little round lights that you can stick anywhere. They were about six inches round and you tapped them to turn the lights on. One night we were particularly punchy while waiting around backstage and one of the moms - who may or may not be a member of a local school board - stuck two of the lights under her shirt and turned the lights into breasts. Funny enough, just by itself but then we realized we were not alone - the male guest dancer was also back there as his dressing room was also in that corner of the backstage area. We all dissolved into stage whisper giggles and snorts! Good times. 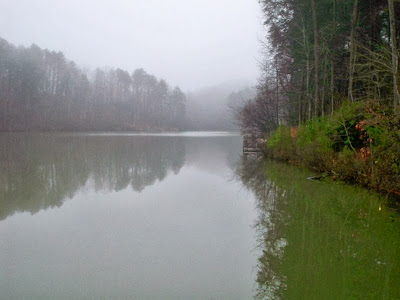 While a big chunk of the country is experiencing record cold, we're having unseasonably warm and incredibly foggy weather. It's spooky outside. Austin took several pictures down at the dock this afternoon.

We're all feeling a bit sore but the house is definitely taking shape. Austin hung pictures for me this afternoon and it's amazing what a huge difference that makes.

Another week is tripping by... hope yours is going well! Love and hugs, y'all! 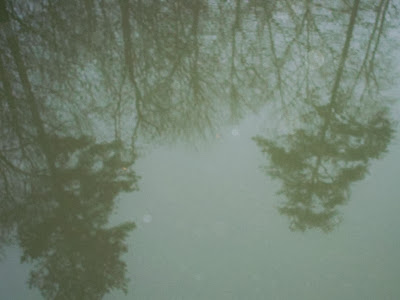 Reflection of the trees in the lake. 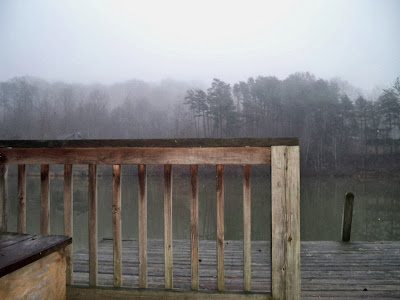 from the dock... he was trying to get some contrast to show the fog. 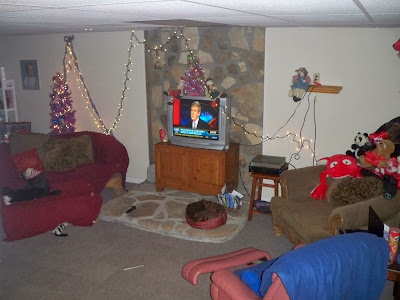 My loopy lights... from the angle of my nest (the pink chair) it looks good. It sort of frames the stone hearth. You can't really tell in the pictures but the lights are hanging over the part of the room where you wouldn't normally walk because of the hearth. 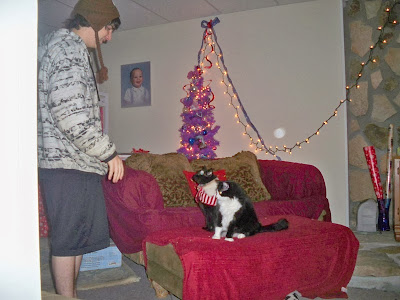 The cats are fascinated with Austin for some reason. Maybe it's the hat. 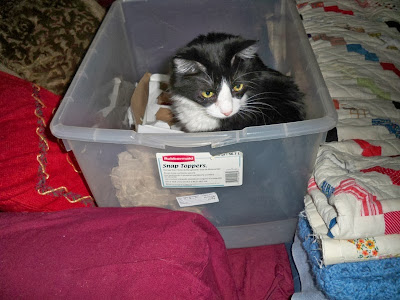 My little helper. So far he has totally ignored the trees. He watched me hang the ornaments but hasn't tried to knock any off yet. He wants to make sure Santa Paws is coming to see him!

Exciting for sure.
Love the pics of the lake and the décor :)
You are going to have the best Christmas ever.
m~