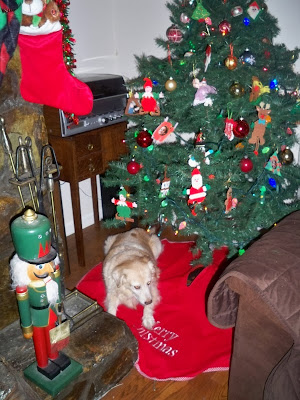 Twenty days until Christmas and the gifts are wrapped but the cards are not addressed. I have the gifts downstairs "under" my tree. No gifts upstairs yet.

The weather is warm and frizzy. I mean, steamy.

Lily, the old dog, follows us downstairs any time we have food and she's afraid to go back up the stairs. One of us has to take her outside and walk her up the (wet, muddy) hill to go in the front door. She's done it so many times that once you open the back door she just automatically heads for the hill. Austin says it's getting old.

Lady is unhappy that the Christmas tree is where her bed usually goes.

The old lady dogs are staying with us when my mom goes back down south for a few days. The biggest obstacle to that is that Lily has the bladder of an old woman. She has to go out several times a night. Austin says he'll just stay upstairs playing xbox all night and I can take care of her during the day. The only flaw in that plan is that I'll be gone several hours on Monday with my nieces and several hours on Tuesday when I go to the doctor. 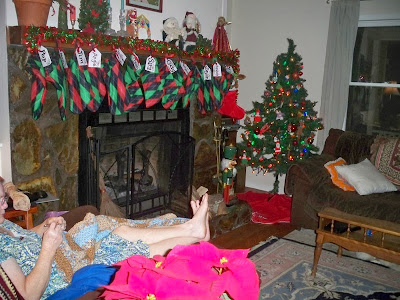 I finally took a few pictures of the main floor Christmas decor and realized that I misspelled my daughter-in-law's name on her stocking. Of course, I lost "best Mother-in-Law ever" on their wedding night when they had to drive 200 miles round trip in the rain to get the keys to their wedding venue that I had in my purse.

I try. I really do. I don't think God made a mistake by not giving me daughters. I would have messed a girl up BIG TIME. I'm talking therapy before she was out of Middle School.

I had to double check to make sure that Ryan's girlfriend Sara didn't have an "h" at the end of her name. They've been dating for... a long time. I should know how long. I don't have any idea.

I knew that it was a mistake to start working on the tags for the stockings an hour after ambien.

They are more stocking shaped than they look. We almost need a penny in the toe to make them hang right. 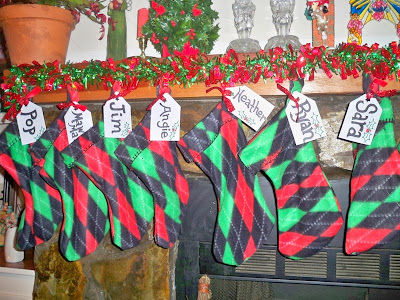 Of course, we weren't really sure where to make the cut on who had a stocking and who didn't. One brother is Jehovah's Witness so we don't see him or his kids on the holidays. They were out. His daughter is no longer practicing the no holidays thing so I could include her and her husband and kids but they are too far away to be here on Christmas. My brother in New York might come for Christmas (have no idea) but I don't think his girlfriend will. (Even though we have a great guest room now complete with private bath!) So I included him but not her. My other brother, his wife and four kids do Christmas with her family every year. Let's not go there. And Austin's girlfriend and her little girl... I think it's too new to include them. There could be another 17 stockings just from our immediate family!

The truth is that every time we get together - whether it's a couple of us or a couple dozen - it's a blessing to be a part of a large family. I try to focus on the ones we get to love on more than grieve the ones who aren't with us often enough. 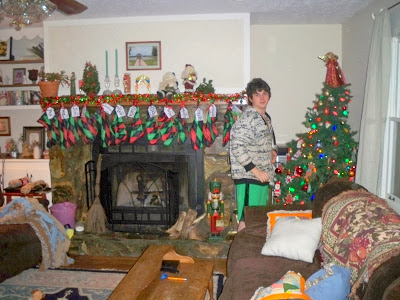 Tonight I'm watching the Sound of Music on tv. They're doing the stage version and not the movie. People who have never seen the stage version might be disappointed. Truthfully, the last time I saw the Sound of Music on stage it was with Purple Michael and this particular community theatre performance was bad. So very, very bad. He and I got started snickering - so disrespectful, I know! We ended up slipping out at intermission. People who work in theatre sometimes make the worst theatre patrons. My friend Gina and I went to see a performance one time and there were so many things that we would have done different/better that she started making a list... and we had a good time dissecting the show afterwards.

I made a little more progress on my living space today. Today I worked on putting books back on the shelf.

The missing ornaments and wrapping paper finally resurfaced. We have four attics. It was in the one attic that nobody checked. I knew it was here somewhere!

I cut my leg shaving this morning which means that it will be a long, long time before I do that again. I liked to never got it to stop bleeding.

Anyways... that's my Thursday! Time for me to remake a stocking tag... 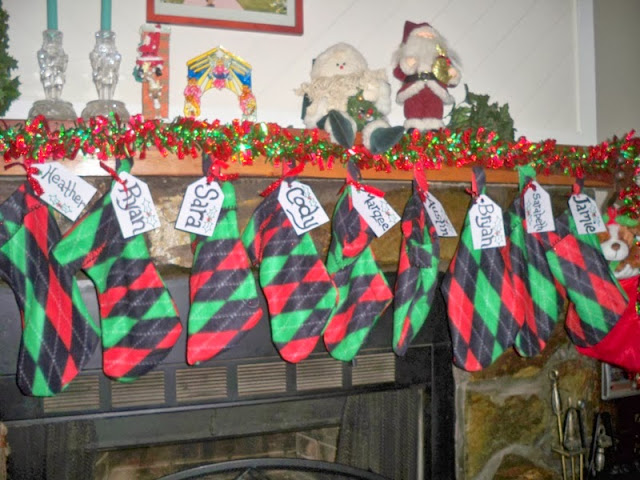