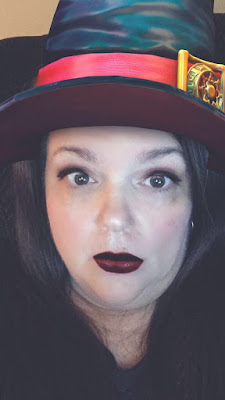 I realize that I am making lists this week rather than actually writing a blog entry. It's just the way my mind is working this week. One. Step. At. A. Time. I'm going to try to do better today.

This morning my mom and I went to get our hair cut. The place where we go - The Cutting Edge - is where my sister-in-law and nieces have gone for years. This was mine and my mom's third time. The lady who does our hair, Gail, is great at what she does but she is a talker. Like... everything takes longer because she is always engaged in so many conversations around the shop. Picture Truvy's from Steel Magnolias. It's that kind of shop. She does a great job and we genuinely like her but if sitting for awhile causes you pain, it's a ... well, it's a pain to go. As it just so happened this week we had a hard time finding a time she had open when we weren't otherwise obligated / when Pop was going to be home to watch Oscar (the dog who must have human contact at all times or he will die - only slightly joking) and it ended up that she came in at 8:30 this morning to do our hair. WHICH, as it turns out, is the perfect time because the shop is mostly empty and there is less traffic / conversation at that time. We were both shampoo'ed, cut, styled and waxed (eyebrows) in just a little over an hour which is a WIN in my book. My mom wanted me to have inches cut off my hair but I only got a trim. I like my hair long. And now I have those wild eyebrows under control. This picture is from yesterday, pre-brow-waxing. My mom got her brows done for the first time and it wasn't as bad as she thought. Gail actually is very gentle with it.

Since we were going to be out and about early and since Cosette is easier to watch (clingy) around strangers, I suggested that we pick Cosy up on our way to the shop. I had her mom just send her in her little pjs so all her mom had to do was change her diaper and unlock the door for us. And I would have even changed her diaper if she wanted me to. Cosy did great... I brought her breakfast and she hung out with me while Mawmaw was in the chair and hung out with Mawmaw while I was in the chair and it was great.

We came home and woke Cosy's daddy up and played around the house for a little bit. I told Cosy it was time for her to get dressed so she walked into my hallway and found the pretty red party dress we bought at Goodwill last week and brought that to me. That's what she wanted to wear today. She's every ounce my girl... never the wrong time for a fancy red dress. I dressed her in an "I love daddy" onesie and some little yoga pants instead. I'm going to get a picture of her in the dress and then send the dress to her mom's so she can wear it to church.

My biggest problem this week has been a searing, hot pain that is radiating down my spine from my neck to my tailbone. It hurts but more than anything it burns and I can't escape it. Nothing touches the burning sensation. It's exhausting. Every movement exacerbates it and I've done a lot of moving this week. It's the kind of discomfort that makes you just want to sleep to escape it.

Although I was having a great time with Cosy today and even though her dad is right with her every second -I could - if I would - and I would, if I could- just sit and let him be in charge - I can't just sit. I have to play too. Plus... she likes doing things with Nana. She likes my hairbrush and my makeup brushes and my big mirror and the little canister of bows that I have in my room. She wants me to play and I can't not play when she's here. Same with Oliver. They are such a gift that I can't just take time with them for granted. There will come a day when I can't hold them in my lap and put bows in their hair. Her hair. I don't put bows in Oliver's hair. And as long as I can still move, I'm going to just push past the pain.

It's easier, though, when we're out and about and Cosy likes going places too. So we played just a little while and then went to get her dad a Starbucks (which he's missing since he's not working) and got Cosy a little cup of milk from Starbucks. I carried a cup of milk around for her all morning and she kept shaking her head "no" when I offered it. She saw that Starbucks cup and was like a camel stopping by a watering hole in the desert. If it is in a Starbucks cup, she wants it.

Then we went to Sunflower, the local Chinese restaurant for their lunch buffet. It's... standard Chinese buffet fare. Not great. Just ok. She likes lo mein noodles and we let her sit in the booth with us instead of the high chair so she was on cloud 9. She would take her spoon and drape the noodle over the handle... and then slurp the noodle off the spoon. It was quite the advanced process she had going on. Then she tried to spoon feed me my fried rice - complete with "num num num" sound effects. She's a silly, silly girl! 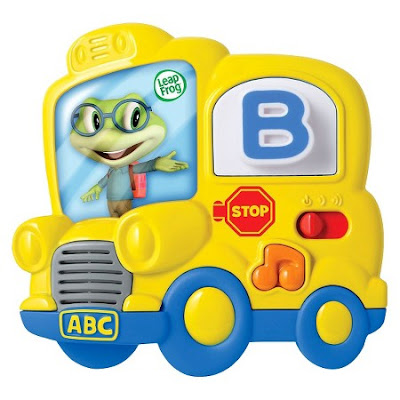 I forgot to mention that she helped me feed the cats this morning. She's learned that we scoop the food out and pour it in their bowl. She's fascinated with the fact that they just lean their head down to the bowl and eat. I asked her how the cat eats and she put her chin on the table and said, "num num". She was talking a lot more today than usual which was adorable. She's got the first four letters of the ABC song down. She said, "bus". I bought her and Oliver both this Leapfrog ABC bus. It says the letter and the sound it makes and sings the alphabet song and "the wheels on the bus go round and round". Cosy MUST have this when she's in the car. If I don't hand it to her when she gets in the carseat she frantically digs through her diaper bag looking for it. She is actually starting to say some of the letters now and as I mentioned, she's picking up on the alphabet song. I think the recommended ages are a little older than the babies are but it's probably because of the size of the letter tiles - could be ingested, I guess. Since we carefully supervise, I don't worry about that. It's inexpensive - but don't buy it at ToysRus, they charge too much. Walmart, Target, Amazon - all have it for around $15.

Anyways... we went to lunch and then went by Walmart to pick up a few necessities and a few not-necessities. Baby girl is developing a pretty strong Sofia the First addiction to go with her Frozen addiction and we spent quite a while in the toy aisle with her grabbing everything Sofia/Anna that she could find. We also got her a trick-or-treat flashlight which was the best dollar I've spent in a while. She was fascinated with the flashlight! After that we took her home because I just needed my day to be over. I wish I could have had her around all day but I needed to be home and not have to drive anywhere else. I've been settled in my nest ever since and for the past couple of hours I've had Oscar with me as well since my mom is having her second cancer treatment today. Hopefully she won't be as sick as she was last time. I just got a text that they were stopping by Taco Bell on their way home - hopefully that's a good sign. Last time I don't think she could have rode all the way home with Taco Bell in the car. Anyways... so send prayers up that it's not as rough on her this time.

I'm planning an early bedtime and a quiet weekend to try to get whatever is happening in my spine calmed down. Hope your weekend is quiet and peaceful - or whatever you want it to be! Thanks for stopping by! Love and hugs, y'all!