This morning I did not want to wake up. I woke up at 4am and felt horrible. I went back to sleep at some point but I'm not sure when. Austin had to wake me up at 8 to take him job hunting. Boo hiss on waking up... but kudos for being eager to hit the pavement. Most places want you to apply online so... it was a lot of driving around getting websites but he did go in and apply and take the proficiency test in Walmart - and passed it - so that felt like progress. I did a little shopping while he took his test and we got a few other errands taken care of while we were out. He's had friends over again today enjoying the Fall sunshine and taking advantage of being on the lake which we don't do often enough here.

I bought a few things for the babies from zulily that came in the mail today. Zulily is... ok for some things. Brands I already am familiar with that I can be more sure about the quality and sizing that are greatly reduced on Zulily are great. Unknown brands can be hit or miss both with sizing and quality. It takes so long for things to get to you that sometimes it's not practical. These things were a good price and I ordered them back early in September we could wait so ... Zulily was a good choice. I like to help a little with clothing for Oliver to help his parents out... and of course, we try to keep a few outfits for each season here for Cosette for when she's with us. I don't buy a TON of baby clothes but probably 4 or 5 outfits per season for each baby. More than that would just be a waste because their parents' style is different from mine. I mean, I am A GRANDMOTHER, after all! My first choice for baby clothes is Carter's because the quality for the price is unbeatable. These clothes are NOT from Carter's but the quality and pricing is comparable. Here's the entire haul... 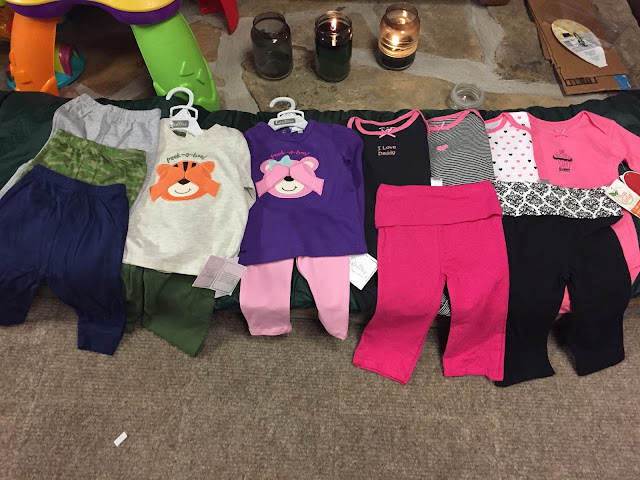 These are the things I got for Cosy: 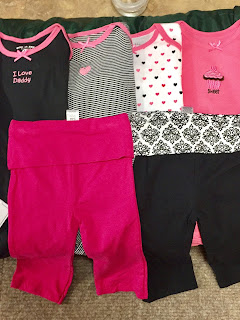 four long sleeved onesies and two pair of yoga pants. Our usual practice is to keep her in whatever her mom dresses her in while we go out for breakfast or whatever errands we run with her. Once we get home we may change her into her Princess Anna costume or into the play clothes we have for her. OR, if it's really warm out we may just let her play in a onesie or just a diaper. She's not a messy kid and we could easily leave her in what her mom sends her in all day most of the time, we mostly just try to account for her comfort.  My living room tends to be cooler than anywhere else. When we play on the porch it can be really warm. She is most likely to get things wet because she likes to pour water from one container to another and that's the number one reason we change her clothes. I do sometimes want to dress her in certain things for photos but for the most part, we just have clothes in case she needs something to wear. We usually end up sending her home in something we've bought for her and it comes back the next time we get her. I especially try to send stuff to her mom's that I know she likes and will get use out of at her mom's house (like her Frozen slippers). (note: The clothes are hanging off the edge of the hearth so the legs of the pants are longer than they look.)

I had already bought six little shirts for Oliver so I picked him up some little jogging pants from Zulily. They are on the left in the photo below: 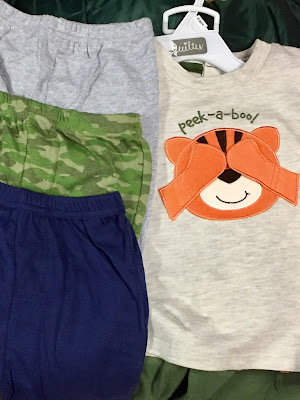 They aren't anything fancy. I think I paid less than ten dollars for the set of three pairs of pants but they're fine for play clothes for him. 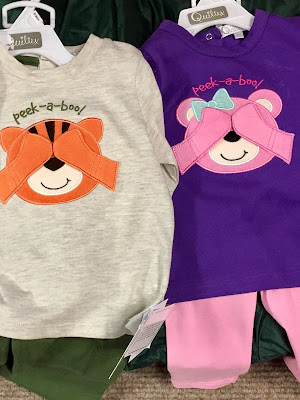 I also bought these two outfits to take photos of the babies in... nobody likes the outfits but me and that's ok. I wanted them in something similar but not identical that wasn't seasonal so we can take their photos in them whenever we all end up in the same place. I just want to get a nice photo of the babies together and/or me with the babies for framing and maybe for Christmas cards if we manage a photo in time. We'll see whatever plays out. Either way, they were a good deal.

What do you think?

Both babies wear a 12 months or 18 months depending on how it's made. Cosy is longer and Oliver is thicker. She needs the larger size for the length and he needs it because he's more solid. They're really close to being the same size, though.

I also got a pair of cozy slippers for myself that are so incredibly soft and fuzzy inside! They were another really good bargain on Zulily.

While I was in Walmart today I picked up two "educational" toys for the babies from Leapfrog. Back in the Spring I bought them both a little school bus that sings the alphabet song and "the wheels on the bus". You can put a letter tile in the bus and it tells you the letter and the sound it makes. Cosette is addicted to hers and HAS to have it when she's in the car. She looks around frantically for it if we don't hand it to her right away. We keep the diaper bag (backpack) on the seat beside her and she will dig through it looking for the bus. Walmart had something else from Leapfrog that is also a learning toy but it is a stuffed animal that I think will work great for a "travel buddy" and maybe be a little easier to carry around than the bus. You can program it to say and spell the baby's name! I bought one for each baby for Christmas. I plan to get a little kitchen for Cosy for Christmas and a little grill for Oliver since he loves hanging out with his grandpa when he grills. I've bought them each a book and THAT IS ALL I'm buying for them for Christmas. They get SO MUCH STUFF from everybody and I give them stuff all year. I'm making myself stay on a budget for Christmas this year!

Every year my mom and I do stockings for the whole family for Christmas and while I was in Walmart today I found the PERFECT stockings for everyone and I'm so excited! It's something different from what we've done before but I think they will work perfectly. This means I need to know who is going to be here this year so I can get your stocking put together!

I also bought some fancy washi tape at Walmart that will work well with the little "Christmas jars" I've been making. I'll post a picture of the finished project one day in the future. Soon. They're really turning out cute.

Tomorrow Austin has his root canal in the morning and after that I have nothing on the schedule for the next few days. If Austin's up to job hunting on Friday we may do some of that but I've been busier than usual this week and I'm just worn out. My back and head feel better than they did yesterday (from the freezer lid that crashed down on me) but they're still tender. I just need to rest in a bad way. Once we get home tomorrow I just want some time in the nest to rest.

Hope your Wednesday is going well... hang in there folks, there's light at the end of the tunnel! Let me know how your week is going in the comments here or on Facebook. Thanks for stopping by, love and hugs, y'all!