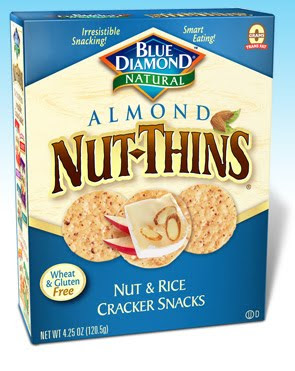 It's a blood pressure reducing sunday for me, for sure.
I went for a brisk walk - the kind where you suck wind like you've been running from a monster.
I had some more of Nadine's chicken salad on blue diamond almond nut thins - love both!
I had some more of the spicy okra and tomatoes I made yesterday. (more on that later)
I had quinoa salad.
I got an earache. I went to the store to buy some sinus meds to try to relieve the fluid on my ear.
I ate a dark chocolate covered frozen banana (from Diana's Bananas - 3 pts each)
I got sleepy from the sinus meds.
Stasha came by to check on me.
I took a long nap.
I woke up STARVING - no doubt because I had the chocolate earlier - sugar makes me have wild cravings.
I ate more chicken salad and almond nutcrisps.
Crackers are probably my biggest weakness. Nut thins are made from rice and nuts so they're slightly healthier but still... I could eat a whole box in one sitting.
I put some fresh corn on the cob on the stove to boil. My co-worker bakes hers wrapped in foil. That sounds good too... but I'm boiling it.
I haven't made any salads yet this weekend. I have caprese wheatberries left over from last week. I'm going to have them with the corn.
I bought either barley or bulgur from the bulk bin last week and I can't remember which it is. They are prepared differently. Oops.
Remember my mess of okra that I had? Yesterday... I chopped up some of the gorgeous colored spicy peppers from the farm... about a cup's worth... chopped up a cup of yellow onion... cooked them in one tablespoon of olive oil until the onions were translucent... added two links of chicken sausage sliced into rounds... 4 cups of sliced okra... three cans of tomatoes... and about two cups of diced eggplant... cooked it until the okra was done and it was sooooo yummy, silky smooth... and 1 point per cup. It was soooo good! It had a little bit of bite to it because of the peppers but I loved it.
Bitty Kitty the wild tomcat slipped out the door today. He hasn't come back home yet. I'm not stressed this time. I'm mad at the little wandering gypsy brat but I am not worried.
I'm watching Gidget...
We have the Cooking Channel on preview this month. Wish it was part of our regular viewing package but I refuse to upgrade. I'm spending far too much on satellite already.
Glad to have a bonus day off tomorrow. I wish I had every Monday off... but then... I'd starting hating Tuesday.
Hope you're having a great Labor Day weekend!