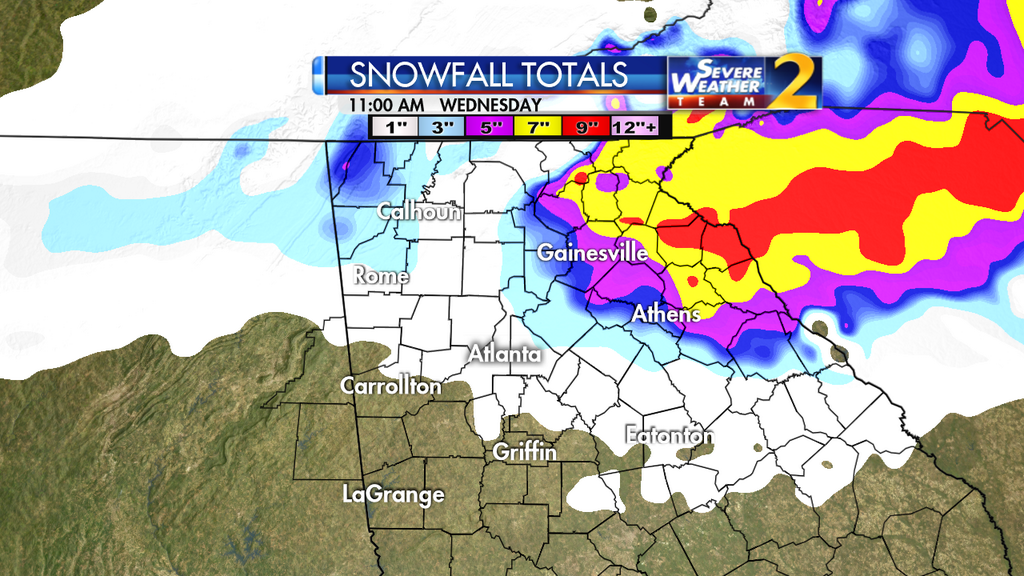 I was satisfied with the blanket of snow we had two weeks ago so when I heard that we were in for another round of "wintry precipitation" I was ambivalent. Here in the South the media hypes every snowflake so much you never know when to take them seriously.

The last storm we had - you know, the one where thousands of people were trapped on the interstate for 24 hours, children were trapped on school buses on the roads or trapped at school overnight, honestly, I don't think the media was clear enough. I know Al Roker insists that we "were warned" but the line of expectation of accumulating snow didn't really include all of Atlanta. It looked like it was going to be more toward the North. This time they have been very adamant and insistent that everybody is getting SOME kind of Winter weather. There are predictions of up to an inch of ice which is truly catastrophic. I guess people really only process "nothing to worry about" and "complete catastrophe" and nothing in between. So buy up all your bread and milk folks, you'll use it eventually.

In the photo of snowfall totals above my county is mostly yellow, seven inches. That's what's predicted. Since I was too lazy to edit the photo I grabbed from the Atlanta news station, you'll have to find White County on the map on your own. If you go to the far Northeast corner of Georgia, we are the county two in from the Northern border and two in from the Eastern border. We live on the Eastern side of the county. Although this storm has a snow/sleet/ice combo predication, our area is expected to get mostly snow, which is good, less chance of loss of power. Even though I've reduced my screen time lately, I still am very internet/electronic dependent. I also like to be warm and eat.

Our storm preparations included a grocery store trip yesterday and moving the grill from the uncovered deck upstairs to our covered patio outside the Whine Cellar. I live with retired people which means we always have enough stuff in the house that we could be stuck here for a month and never miss a meal. I don't worry much about cabin fever because it's not unusual for me to go a week without leaving the house anyways. We got a delivery of wood on Saturday so we can stay warm, even if that means huddling around the fireplace.

Austin's friend Shaun came over to get snowed in with us. I got a little nervous when it took both boys three trips from his car to move him in - complete with large tv and a piece of carry-on luggage that was bulging like he was heading on a two week trip with Rick Steves. He's a nice kid who likes cats so I don't mind him being here - except for the fact that he never puts the seat back down on the toilet which is a HUGE no-no in my world!

I didn't blog last night because I lost myself in Valerie Bertinelli's book, "Finding It" last night. She wrote this book about a year after the first book. I should have known that there wouldn't be a lot of biographical information and a lot more of her politics and personal opinions since she really had only a year to cover in this book. Her politics are fairly offensive to me. She criticizes Bush and Cheney a lot without ever explaining WHY she feels that way. It's as if she believes her dislike of them is so common that everyone understands what she feels. I don't and it changed my opinion of her for the worse. She's not the girl next door - she's the mindless liberal next door. She did explain a lot of reasons she likes Obama but it was all generic "change" stuff that had no content or explanation of what "change" she was expecting.

My non-ambien induced sleep last night didn't go as well as I had planned. I started getting sleepy around 9pm and I really should have gone to bed then but I was watching the Westminster Dog Show. When I settled in around midnight I had a hard time going to sleep. I went ahead and got up before 7am this morning while I was still a little sleepy, hoping that will make my attempt for two non-ambien induced sleep nights in a row be more successful. And, of course, if I need to settle in for a "long Winter's nap" today, there's no reason I can't.

My plans for today include ancestry.com, lots of Olympic viewing and taking photos of the snow accumulation hourly. It's a much more wet snow this time so the branches of the pines are already sagging with the weight. If ice accumulates on top of that we're definitely going to have some branches fall. Hopefully none of them will interrupt power. I'll be back later with more pictures but for now... this is what we have... 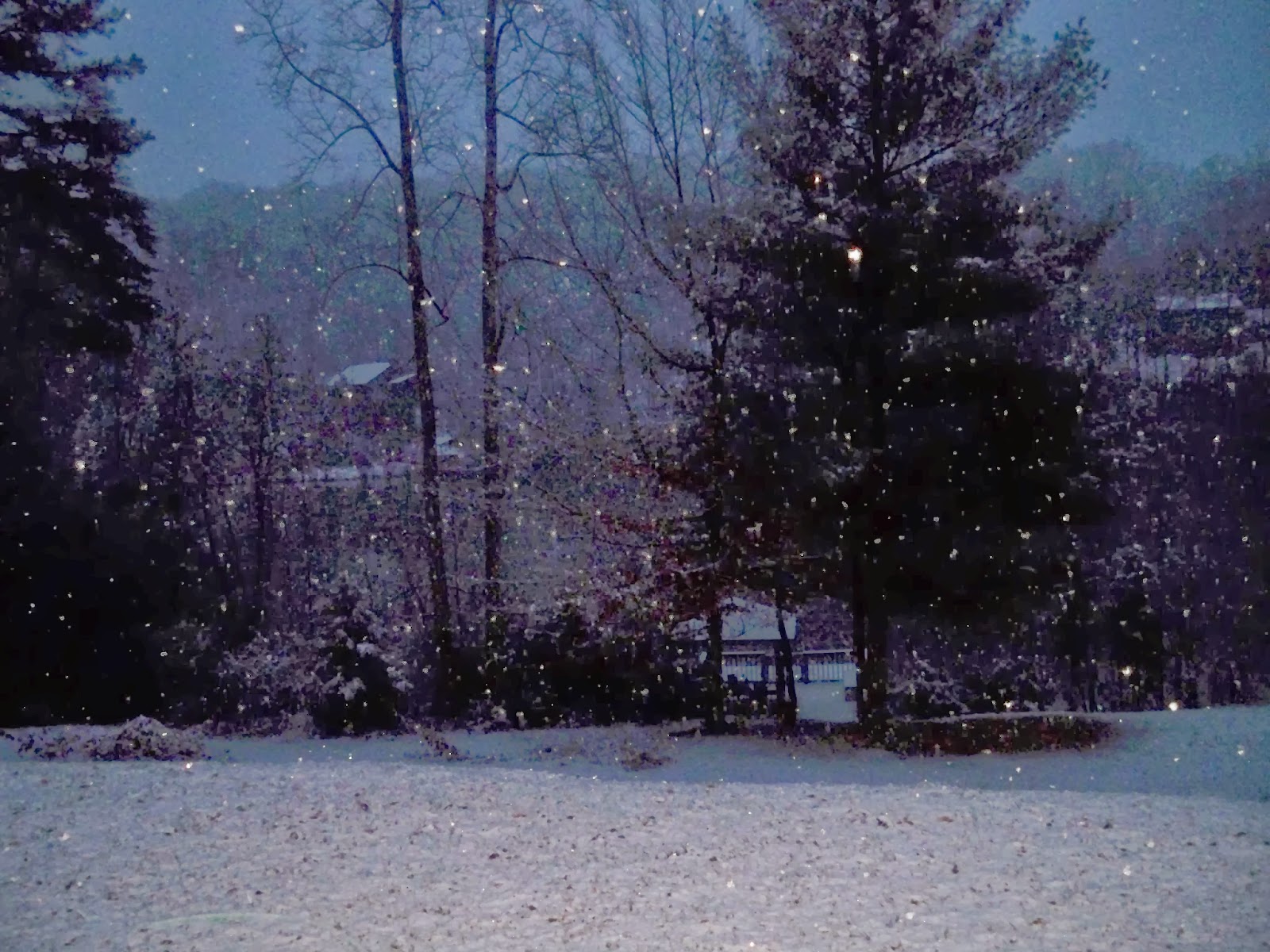 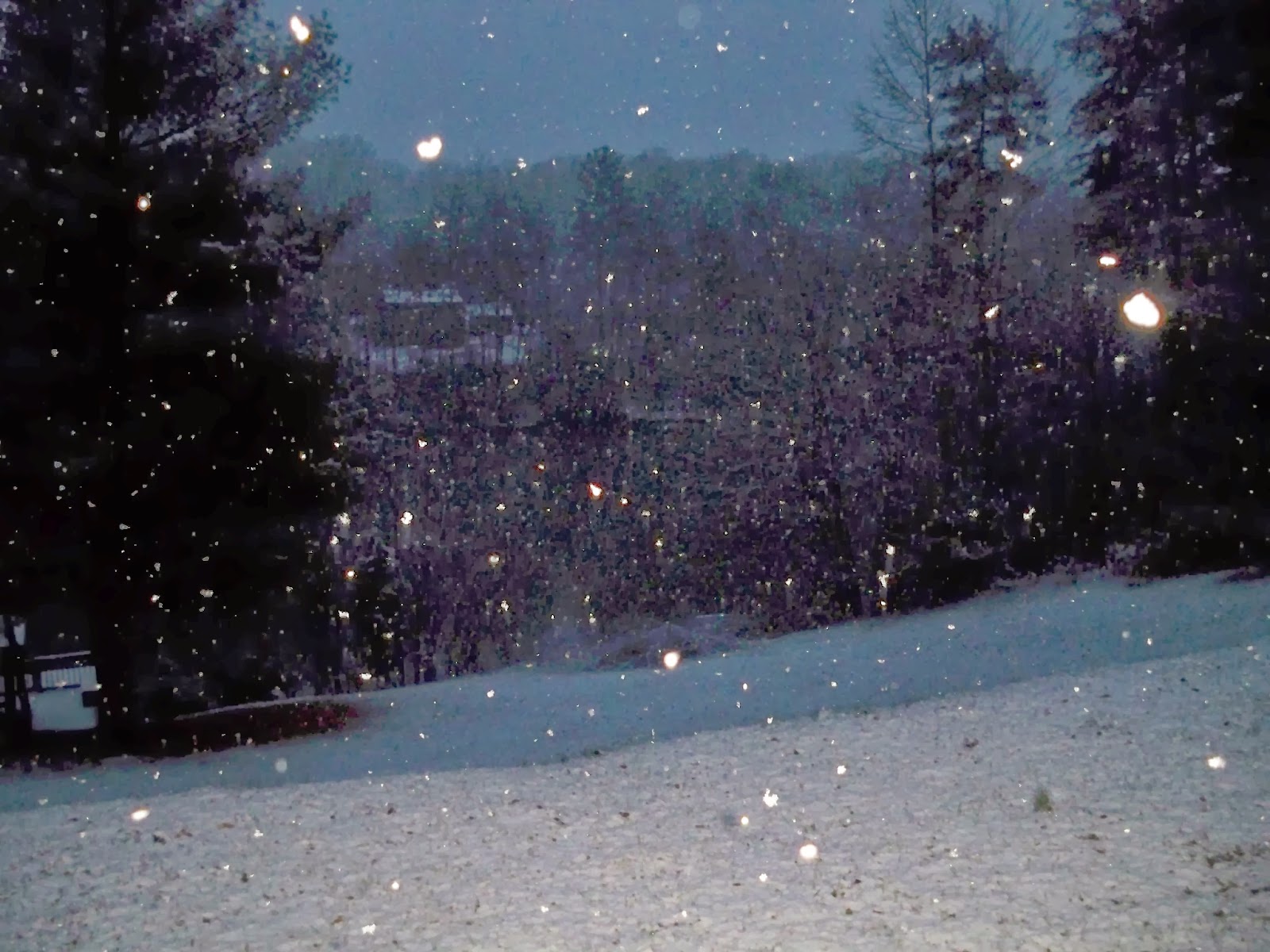 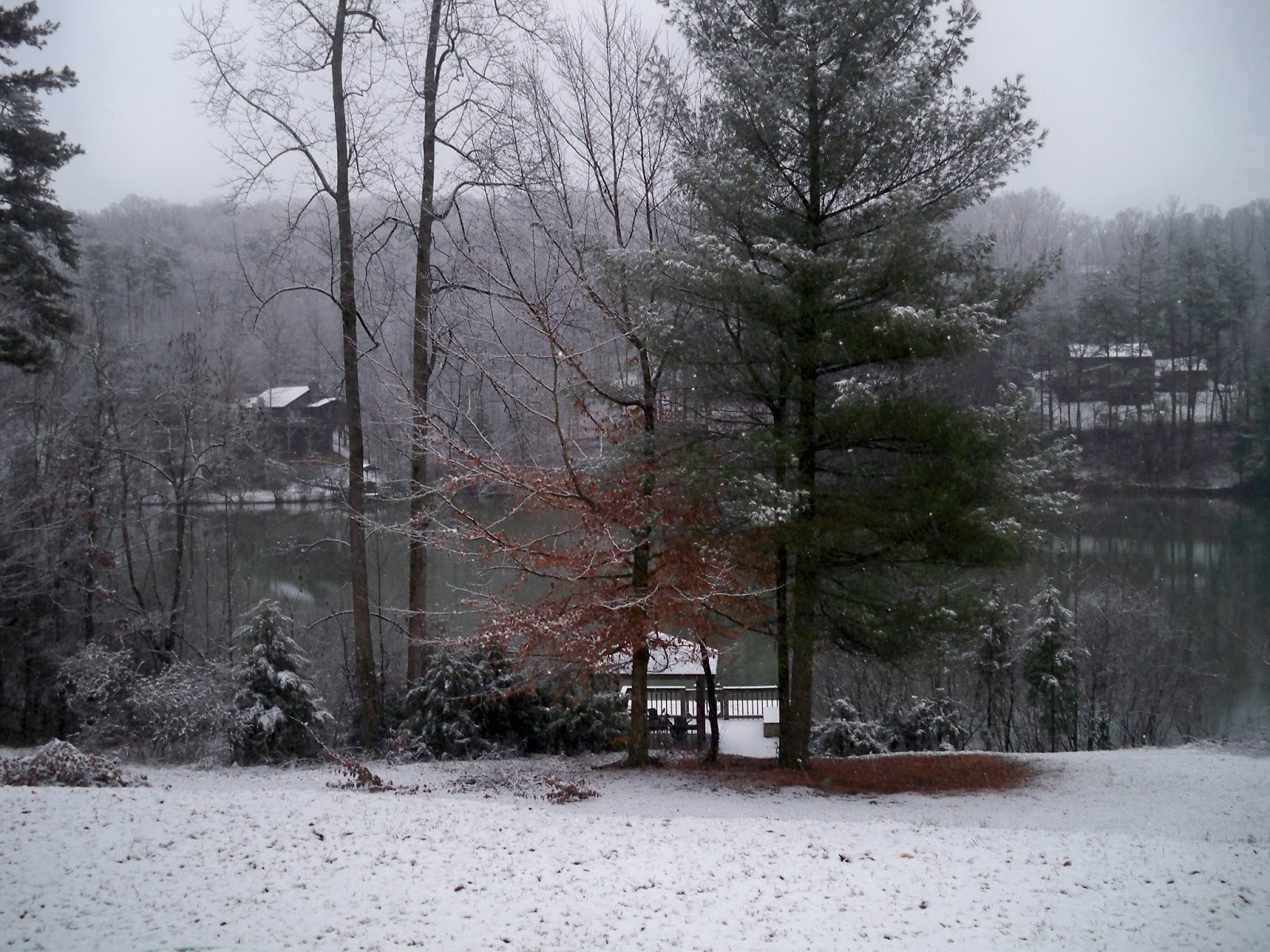 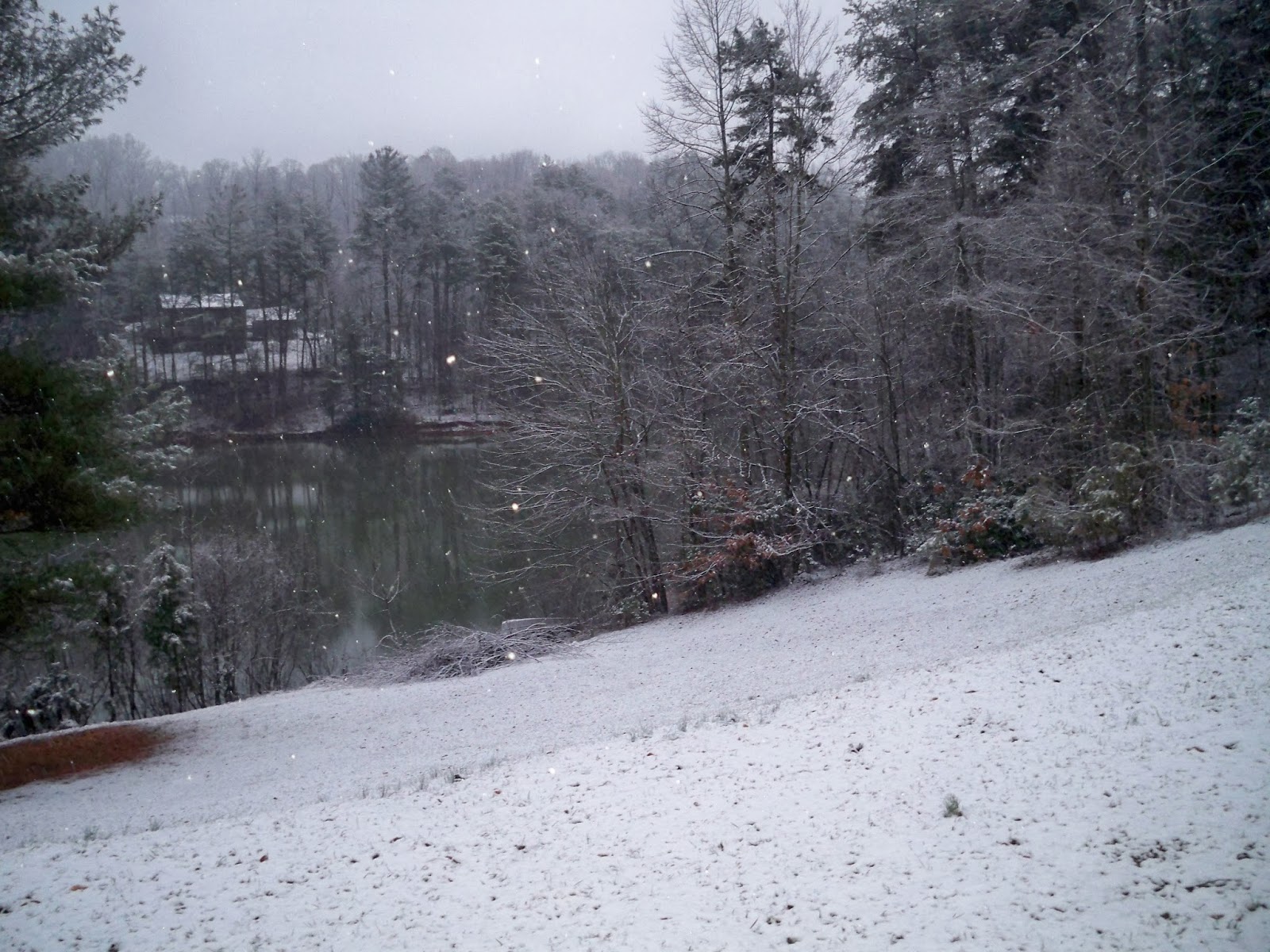