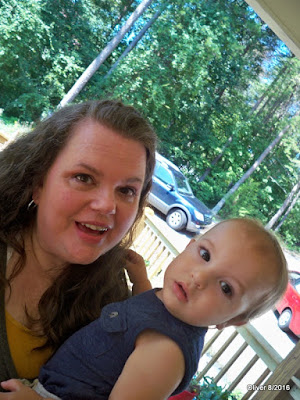 Hope Solo is pretty amazing. I'm not much of a soccer aficionado but I do like watching Women's Olympic Soccer and there were several times during the game with France that Hope Solo saved the day for the USA. I had to leave with ten minutes left in the game to go pick Austin up from work and I just set it to record on the DVR so that I could enjoy the end of the game. So glad we pulled that one out! It was really intense despite the 1-0 score. That's the thing that always got me about soccer - all that time and nobody scores! But it really is interesting to watch, especially at this level.

The game before was also pretty entertaining - Canada vs. Zimbabwe. Zimbabwe was really outgunned but they really fought hard. That "Olympic Spirit", you know? What are you looking forward to seeing during the Summer Olympics? My favorite has always been Women's Gymnastics. I haven't checked to see when they start. I watched a little bicycling this morning but it's been mostly soccer since.

I saw about thirty seconds of the Opening Ceremony last night. Crashed... fell asleep. I recorded it but... eh. People wearing ponchos with arrows on them? I'll pass. Lately I've been falling asleep shortly after 8pm. I wake up a few hours later and watch a bit of tv and then go back to sleep and then I see pretty much every hour on the clock between 3am and whatever time I give up on sleep. So although the Opening Ceremony was scheduled to start on tv at 7:30, there was pretty much just filler stuff until I fell asleep. I hear it was heavily commercialized, NBC making back what they paid for the rights to show the Olympics, I guess. I don't watch a lot of live tv so the commercials would have made me quite frustrated. Better I slept through it. 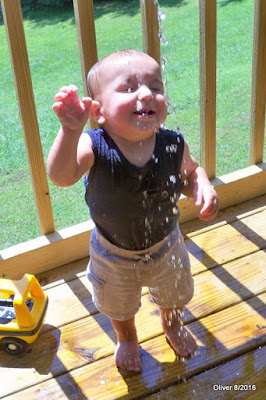 Today Oliver came up to see us (with his parents, of course). I posted 75 photos on Facebook of him. He's seriously the most adorable little man ever! He loved playing outside on the new porch and entertained himself with a watering can. Then we brought him down to my "house" and he enjoyed Cosy's toys and the cats' toys and pulling up carpet... he had a blast. Angie brought Sarabeth and Jamie over so they could see him. He loves his big cousins... Cosy always has too. It's like the babies realize that they're not quite grownups but much bigger than them.

Pop grilled steaks and we had corn on the cob and potato salad and watermelon. It was a proper feast but I didn't eat much. As usual when the babies are around I put so much energy into enjoying them that the pain levels are amped up and I really can't eat much. For dinner I had some of the shrimp that I had Austin steam for me at Ingles yesterday. Still good. When I picked Austin up from work we made a Dairy Queen run so he could have an Orange Julius and I could have a Mr. Misty, although they don't call them "Mister Misty" any more. We tried to get some the other night but their machine was down... so I've been wanting one ever since. They also have dog biscuits in the drive-thru at our Dairy Queen so Oscar gets excited when we go there.

Oscar LOVES to ride with us to pick up Austin. He knows when it's that time of day and watches to see who heads out to the driveway. He loves going into town as long as we don't head down the road to the Vet's office. Personally... I could never leave the house and I would not mind a bit. Maybe not never ever. But I'm really in need of a break. It seems like it has been so long since I've been able to have pain meds during the waking hours because I need to be able to drive. It's not been fun. Some days I just want to cry by the time I get him home from work. Yesterday my mom was trying to be encouraging so she said, "tomorrow will be the last day you have to get him until Sunday". Um... of course Saturday will be the last day until Sunday... LOL! In her defense... her blood sugar has been so messed up as well as her blood pressure so she's a little ditzy. Plus Pop's been gone so much this week that every day has felt like Wednesday (the night he has dinner at church).

Anyways... I wasn't going to blog tonight because I didn't think I had much to say. I'm just so wiped out. But it turns out that I ALWAYS have something to say! This is going to be the last blog until tomorrow, though, so I hope you enjoyed it. (get it?) Love and hugs! Go check out the pictures of my Ollie on Facebook! See you tomorrow!

Oliver is so darn cute! That smile.. your a lucky gram!