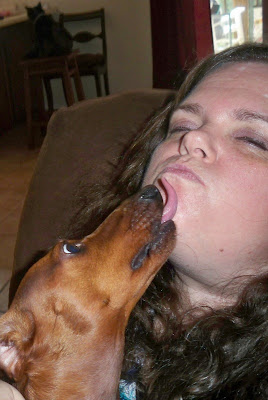 Today was part 3 of a four part process of moving to the Mountain House.

First, last August when we closed on the house, we moved my belongings from the storage place. It's a much larger house than I have ever had so I didn't have enough furniture to fill the whole place. We moved my living room set (that my friend Cyndi gave me - still loving it, Cyndi! Thanks again!) to the Whine Cellar (aka basement) and we moved my kitchen table in the dining area and... we moved my bed to the master bedroom of the house so that Pop would have somewhere to sleep. (My mom hates my bed and it's too small for her and Pop to sleep together in comfortably so she sleeps on a big ole cadillac of an air mattress in the living room. Not that I want to blog about my parents' sleeping arrangements but. Whatever.) We use all my kitchen stuff in the kitchen and that sort of thing. Of course, my dad upgraded a few items that were a little worse for wear... and then I won a huge set of silverware at the office Christmas party and we use that here too. 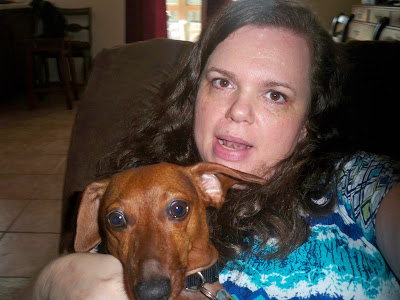 The second wave of moving stuff was to take the things that we are inheriting from Grandma that were NOT being used to stage the house for selling. This was another big merge of linens and tsatskis and framed art and stuff like that.

The big job for today, part three, was moving the furniture from Grandma's house now that her home is under contract and set to close in early August. They had left most of the furniture in the home to be able to *stage* it. Now that it's sold... we needed to clear it out. Since I couldn't carry anything, my job was to care for the animals so Mawmaw, Pop, Austin and Logan could go to Hayesville, NC and load up the truck. Oscar has this... um... lullaby of sorts that I sing to him when he is experiencing separation anxiety - it's from the musical "Side Show" and the song is "I Will Never Leave You" and I have both sang and played this for this poor pup that even when he hears the first few bars of the song, he knows that *leaving* is going to happen. I took pictures of my siamese dachshund. 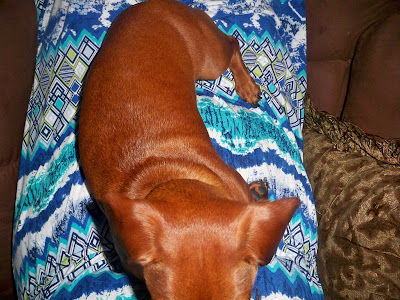 This is him RIGHT ON TOP OF ME! 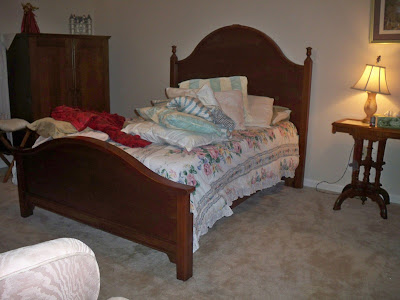 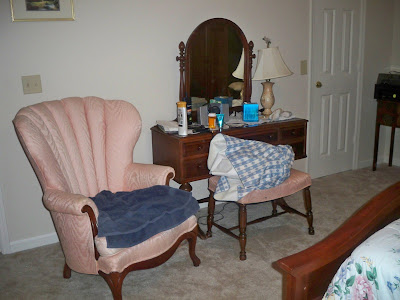 The master bedroom looks so sophisticated and peaceful! And I forgot to mention that there are a lot of odds and ends in every room. We worked on getting stuff HERE and getting things to basically the right space and we'll push on into the nitty gritty of really organizing and decorating each space over the next week or so. 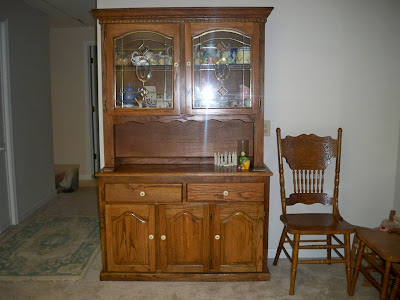 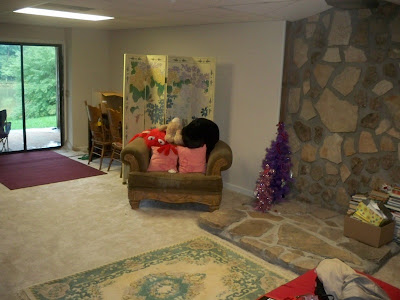 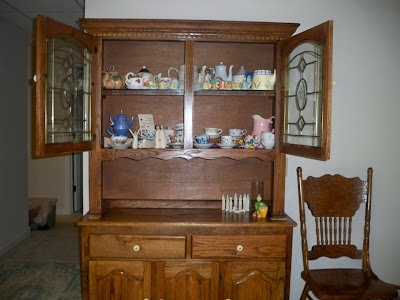 We moved my high top kitchen table (comes with stools) down to the basement to be sort of a work table for me. It's hidden behind a lovely screen that will keep my mess hidden away. I also got a lovely hutch with a china cabinet which is perfect for displaying my teapot/teacup collection. I put my cookbooks on the top of the desk part. It looks nice. Once we get the real kitchenette built, it will be awesome. As it is... with the new kitchen table (coming on a later load) I'll be able to seat six for dinner!  Looking down the hallway you can now tell that it's a bedroom and not a storage room piled with boxes! 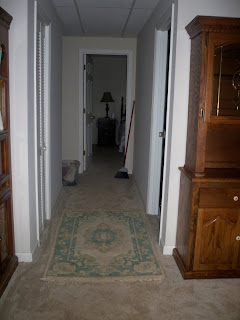 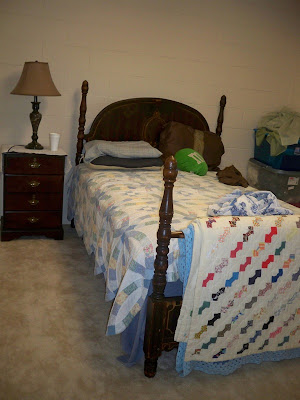 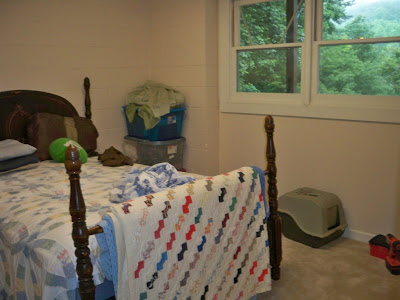 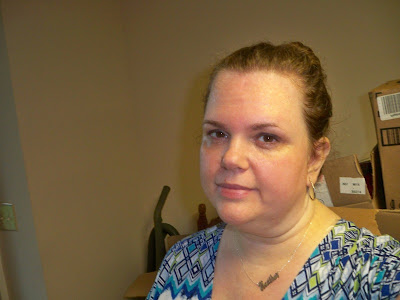 It wasn't a great day to move because it rained - like monsoon rain - right at the time they got back with the truck. Some things had to wait and some of it... we just got wet. They. Got wet. Not me. I was in charge of making sure none of the six animals went out any of the four doors we had open. I just got tired. But not drenched to the skin like our poor moving boys. And let me tell ya.... those boys worked SO hard! Austin because he's an indentured servant here and Logan because... well, heck, I feed him at least two or three nights a week. He knows what side his bread's buttered on. They really just stepped up and made the process as easy as possible for Mawmaw and Pop and THAT is what me feel like I've done a really good job with raising my boys. They may not be out earning some high-falluting degree but they're good boys, they work hard, they step up and are protective of their grandparents and that makes me proud. 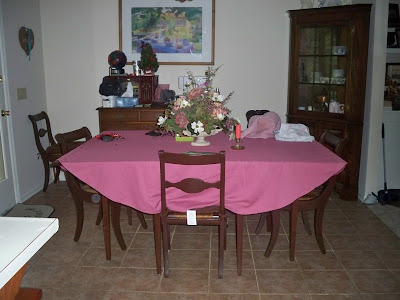 There is a part 3-b to cleaning out Grandma's house. There's a dinette set that is going to be used in my kitchenette in the Whine Cellar. It's a nice table that seats six. The table and chairs will make this feel like more of an apartment than just a random space. We have Grandma's formal dining set in the eat-in area of the kitchen. Mama thinks it takes up too much space but I think it looks nice. We could have family dinner at the table again! Either upstairs or downstairs, according to who wants to socialize. It feels like such a home! I love my Whine Cellar! I love our Mountain House! There's also a glider for the back porch, on top of the two little ockers that we added. So... if you come to stay at Camp Gant... we have indoor seating and outdoor seating available! We can even offer you a bed - one that is being given to my cousin Michelle. We're storing it up on the top level until she's able to get up here and pick it up. 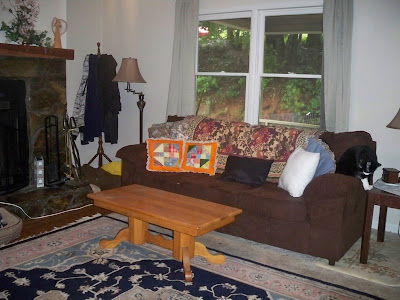 We really need to throw an Open House or Housewarming kind of party! 'Twould be fun! Or just stop on by!

Part 4, if you're wondering, will be coming in the next few months where my parents have to pack up every single thing they've owned over the last 37 years and either move it here, donate it, sell it or burn it. That's going to be a big job. If you're interested in helping and need to make a few extra bucks, let me know and I'll keep you posted about that moving day.

I hastily unpacked as much as I could and organized as much as I could and I'm just head over heels in love with my little space. It feels good to have a home. A beautiful home. Where I am loved and cherished. Where every day brings more beauty in the world around us. Where I am able to spend more time with my parents than I have in my entire life. It's a happy place. If you're in the area and want to check us out, send me a facebook message (you know, so we'll be decent).

I didn't put captions on these photos because I'm wiped out. I think they make sense... and here are a few cute animal pictures: 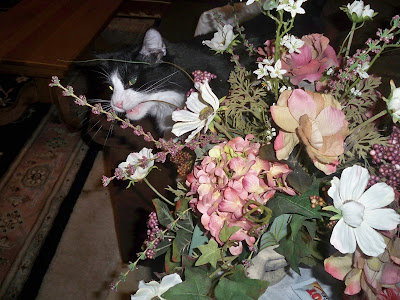 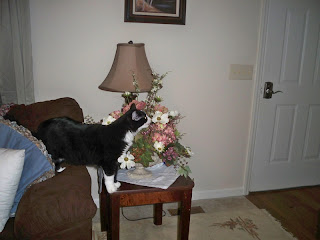 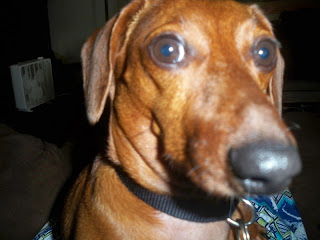 And one very tired... but very grateful and bless... me. 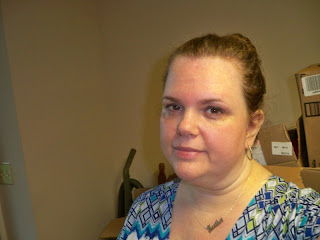 I'm too tired to do much of an edit.(I hope this makes sense). The main thing is that we're feeling like it's really home sweet home now and would love to have company! Company bearing food would be even better! Or if you just want to set your fishin' pole in the water and see what's bitin'... you're welcome to do that too.

Hope you had a great Saturday. Love and hugs!

wow, that is a really nice big homey mountain house.
You are very fortunate for sure.
Bless you,
m