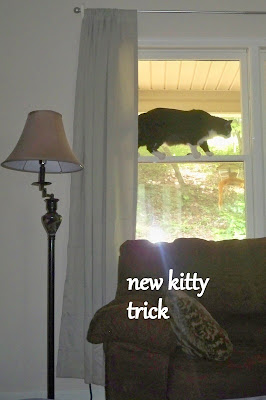 I HAD to leave the house today. The weather is overcast (again/still) and the temperature is mild. My pain this morning was bad - shedding real tears bad - but the mild pain meds that I take every day helped me function enough to be able to make a trip into town without making me too loopy to drive. I finally splurged and bought deodorant (I never COMPLETELY ran out, just for the record) but the real necessity was cat litter. I have scooped diligently but I believe all three cats are using the box on the main level as their primary potty therefore it was beyond scoopable.

Whatever the motivation, it really was good to have a change of scenery. The thing about living here, in a small town, is that phrases like, "can I help you find something?" and "how are you today?" are sincere questions and not strictly rhetorical. People look you in the eye and smile and there is no underlying anger or aggressiveness like I feel on the Southside of Atlanta. Even a stop at the McDonald's drive thru (bribery to get the kid to do the litter changing) was pleasant with smiles and giggles (that I had to pour out a cup of water to have room for drinks) and it's always just a pleasure to be out and about even when it IS painful. And it was, increasingly. 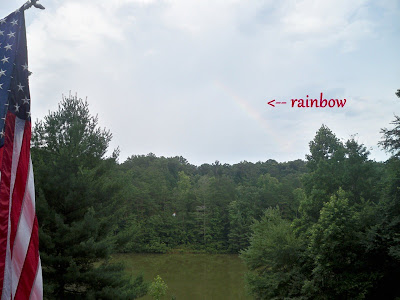 Nevertheless, I decided to make a stop by Fritchey's market - it's a little veggie stand a few miles from the house. My preference, of course, is Loganberry Farm where they only sell stuff they grow and you know that it was grown in the most natural, kind way possible, organic and all that. Loganberry Farm, however, is out of the way and a bit more expensive and down a very windy road that frankly, hurts my back like crazy to drive. Fritchey's is mostly locally grown produce (not entirely organic) and although they don't have an inspirational Earth-Mother like Organic Rose, they are still staffed with those aforementioned Southern women who grow things in the dirt. I bought some corn, some peaches, some orange tomatoes (which I love because they're less acidic) and a few cucumbers. We chatted about the over-abundance of rain we've been experiences and the under-abundance of sunshine. Things are green and growing like crazy because of the rain but not blooming and becoming mature fruit (and veggies) because of the absence of sunshine. Figs still haven't ripened and they are typically ready in mid-June. I really, really want some fresh figs that haven't been shipped from Ecuador or wherever. 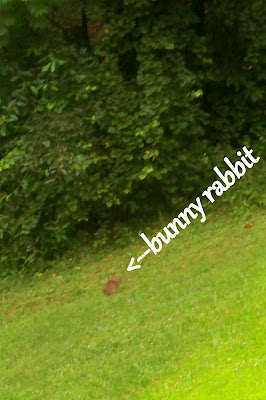 Even though I have been more frugal this Summer than ever before in my entire life, I think days like today when I splurge on things like a basket of home-grown peaches are an absolute necessity for my mental well-being. I don't spend much money on myself, evidenced by the recent deodorant crisis. Maybe I should clarify that I don't spend much on things other than medical expenses (which is the bulk of my budget currently). I purposely avoid going places because for every little excursion there is the temptation and sometimes the necessity of spending. We've stretched the pantry quite nicely this week and I'm proud of that. I'm also pleased to have spent a little today. I needed that.

More than anything, I think, I just needed to be connected to the world outside this little plot of land. I love it here. The view here will never get old and I will never take for granted being in a small town with smiles and politeness and women who grow things in the dirt. I don't feel the elephant on my chest today. I don't feel the anxiety, despite the pain being at a more severe level. I so very much enjoyed getting out among the three-dimensional people and I so very much wish that my body would allow me to do that more often. 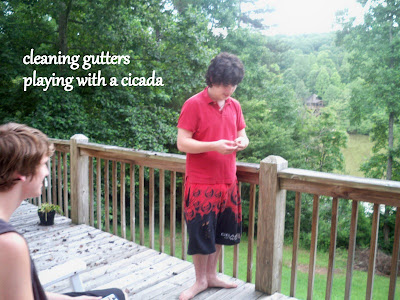 A few unrelated random things: I'm thoroughly disgusted with the George Zimmerman trial. Yes, he was a wanna-be-cop who went beyond the scope of what he should have done. It's a tragedy that never should have happened. However, I don't think it's murder. Manslaughter, perhaps. What disgusts me is the entire trial being carried out under one set of charges and on the day that closing arguments begin the State wants to include lesser included crimes which the Defense has not had a chance to bring witnesses against or include in their prepared closing argument. I also don't understand the presumption of a black/white race war as a result of a not-guilty verdict, should that happen. Um. Isn't George Zimmerman Hispanic? And also, the judge in this case looks and sounds just like my Aunt Clair. I mean, JUST like her, which is weird because Clair has a very distinctive voice.

Austin willingly changed the litter box and even swept. He needs a haircut and I may actually leave the house again this evening to accomplish that task, if possible. Otherwise... I'm going to just bask in the afterglow of my morning excursion and enjoy my peaches.