8:30 PM and the house is quiet except for the intermittent alarms of the dog who must warn us of anything and everything. Oscar is a professional barker. Hopefully once it gets dark outside he'll stop barking every time the wind blows or a squirrel passes by.

The boys (Austin and his friend) are in Austin's room playing XBOX again/still just as they did yesterday and the week before that and the month before that and the year before that. A year ago he was living a hundred miles away from me with people I didn't know or trust. I wish he was more ambitious but for now, I'll settle for just having him nearby.

My mom got stung by bees while cutting the grass today. In a dress and ballet flats. It defies logic. She got stung several times and it's causing her a great deal of discomfort so she's in bed trying to sleep. She is finally trying the remedy I suggested when she first got stung - tobacco - because Pop suggested it. I hope it works but it will be ironic that she could have spared herself a couple of hours of pain if she had just listened to me. I guess it's payback for 45 years of me not listening to her.

I'm still dragging along the headache that I suffered with yesterday... and it just feels like every day my back hurts more and more and that the pain spreads and finds new spots to afflict. We managed to accomplish the two errands we had to do today and from the moment we got home I've been trying to ignore/medicate/wish away the pain. No position is comfortable. It's emotionally numbing as if the more physical pain you have to endure, the less capacity you have for emotions. You would think that chronic pain would make you compassionate toward the suffering of others and I have to admit that it's not the case for me. I just can't help but think that mine is the Ultimate Supreme Pain of all the universe therefore rendering every other pain irrelevant.

We've been watching an awful lot of Toddlers and Tiaras and I have come to view everything in life in terms of "pulling out for a higher title" for example - I won't cook breakfast because usually I'm the one to cook dinner so I pulled out for a higher title, meaning that I avoid the less significant for the more significant. If that doesn't make sense we'll blame it on the pain.

My beloved Purple Michael had a lovely review for the show he's doing in Chicago. If you'd like to read it, click here but the part about him that I loved was:

"Also making his area debut is Michael Vaughn as The Man. Gifted with a solid voice and the appropriate swarthy, good lucks necessary for this role, Vaughn provides some of the show’s finest musical moments." 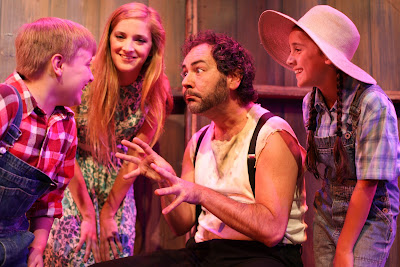 He's amazing. He really is. I'll never forget the first time I recognized his magical ability to turn words on a page into real life. We were on the stage at the Clayton County Performing Arts Center. The theater was empty. I sat on a pallet on the stage with a pen and a spiral notebook. He talked his way through the script for Footloose, the musical. For every scene he would describe how he saw it and I furiously scribbled notes (no laptop then). I was mesmerized.

So many people have fallen in love with him over the years from seeing him perform. I fell in love with the man he is offstage, for the true gentle and sensitive spirit he has once he steps out of a role. I felt privileged that he trusted me enough to show me who he is when he takes off the mask. I've grieved a lot of things that I've lost with my back pain but the one that hurts the deepest for me right now is to not have the ability to just catch a plane to Chicago to see him perform. Not just to see him perform but to be the one who greets him when he comes off the stage and needs a bottle of water or a spoonful of peanut butter to stabilize his blood sugar or just a quiet place to recover from the vulnerability that comes from giving all of yourself in a performance. I loved being his support person and barring some miraculous healing, I'll never be able to be that girl again. It makes me sad.

I'm learning though, that I would much rather have my friends continue to live their lives to the fullest than have them stuck in one boring place with me. I want to see them fly, even if I no longer have wings. I want to be the one holding them up in prayer, believing in greater things for my friends than could ever happen sitting on the couch with me. Lord willing, as we live to the age, whatever age it ends up being, when my friends hit a point of slowing down, just like I've been slowed, I'll be in this place of peaceful acceptance and hopefully, will be able to help them adjust to their own mortality like I've had to adjust to my own.

I started to say that I didn't have anything to blog about today but it turns out I do. Even when the scenery doesn't change much, our hearts continue to evolve. I'm learning that I need to work harder at validating pain in others. I need to work harder to express my delight in the successes of my friends. I need to prepare to be the one who welcomes them when they enter the stage of life I'm in. I can do and be so much more than I ever dreamed right here in this little house in the mountains.

Happy Monday, y'all. Love and hugs.

Heather- You are still there for me. Every moment we spent together, every conversation we ever had, every show we did, every song you asked me to help you with and then pushed me aside saying "I got this", (great story), every pink sweaty use, (not such a great story)...etc. All of these moments will always be with me. You have to know that all of my friends know who you are as I talk about you all the time. My hand to God! I love you and everything you've given and still give to me. Love Her!