The Sixth of July

Can you tell that I've grown weary of coming up with titles for blog entries? After 8 and a half years of blogging (yes, it's been THAT long!) I've used just about every cute and creative title I can think of. I thought of using the Friends episode format (The One With....) but every day it would be some variation of "The One  With Cat Pictures"... so we're doing this for now. Subject to change on my whim.

The parents and the goggies left town this morning and the kid is still off with his friend so it's just me and the cats today. "Just take those old records off the shelf... " As a result it's been super quiet here and I have loved every blessedly boring second of it. Having grown up as one of five kids and then immediately going into the mothering of three kids - I'm sort of like those people who lived through the Depression and as a result are extremely frugal - I'm never ever bothered by solitude. I consider it a reward for my years of living with chaos.

Meals for one are so easy! I made myself a batch of cranberry orange muffins for brunch and had leftover stir fry for dinner. I loaded the dishwasher... did a load of laundry... watched a lot of tv - Pollyanna, the news coverage of the airplane crash in San Francisco and a Big Bang Theory marathon. Yes, I'm living large. Envy me. No really.

My brother replaced the screen door on the screened porch and now we don't have to build a barricade for the cats to be able to go on the porch unsupervised. I let them sun themselves for most of the afternoon and they appeared to be grateful. I understand there is more rain to come and - again - one of those "surviving the Depression" things - although it's been quite a rainy week, I've lived through too many Georgia Summers to complain about mild temperatures in July, even if it comes with rain. I figured I should let the cats enjoy the sun while they can.

The rain has caused some leaking in my bedroom in the basement. I'm not using that room since my bed is in my parents room for now but I do have lots of books and photos and out of season clothes in there. A few photos got damp and some clothing got wet but otherwise, no real damage is done. It seems to be coming from clogged gutters on the main level of the house overflowing down the wall and coming in through onto the ceiling of the bedroom. I would take a picture to demonstrate but... it's dark.

I do have some cat pictures to share, of course. 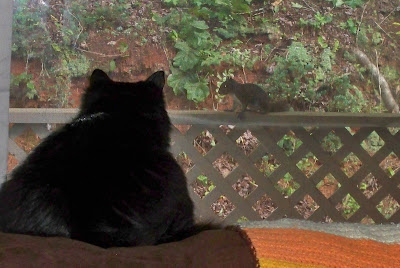 Little Kitty is looking out the window at a squirrel on the front porch. HA! I couldn't figure out how to get the video working on my camera in time to catch it but kitty was actually TAPPING on the window to get the squirrel's attention. It was hilarious! You can tell they're making eye contract. 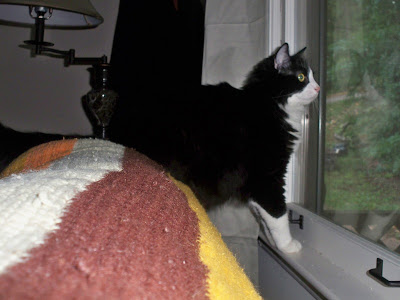 He was balanced between the couch and the window... quite the hunter... check out that concentration! 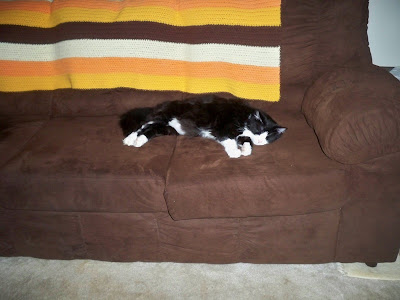 Can you tell he misses Mawmaw? He's laying on the couch like she usually does. He's been there for about two hours now.


And.... after standing strong and tall through a week of rain... Myrtle the Mushroom has left us. 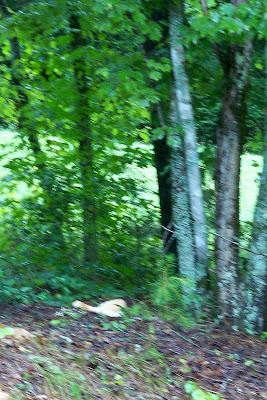 It's a poor quality photo (because I was so grief stricken) but you can tell... she's flattened out. I'll have to find some other sort of wildlife to observe for entertainment. Or I could actually go into town and observe the natives. I don't know. I'm out of ice cream and deodorant and (Depression mentality) you don't want to be without either in the Summer. Of course... the cats don't mind how I smell as long as I keep the kibble coming. But I think a trip to town would be a good diversion. It would give me something to take photos of besides cats.

I will, of course, be obsessing over the Royal Baby who is due to arrive this week! Weee!

ut oh!
I was told that a black squirrel is the sign of a long hard winter to come. Don't quote me.
Enjoy your solitude. :)
m~

No its not a holiday in Oz and we are probably getting just as much rain as you only its much much colder! But thank you for thinking of me! That is so sweet! And I have had a very restful Sunday (my only day off!!) but not anymore since yesterday I quit one of my jobs and from now on I will get both days of the weekend with my precious family! Yah go me!!! Hope all is well and happy in your world. Much love...xxx