The Third of July 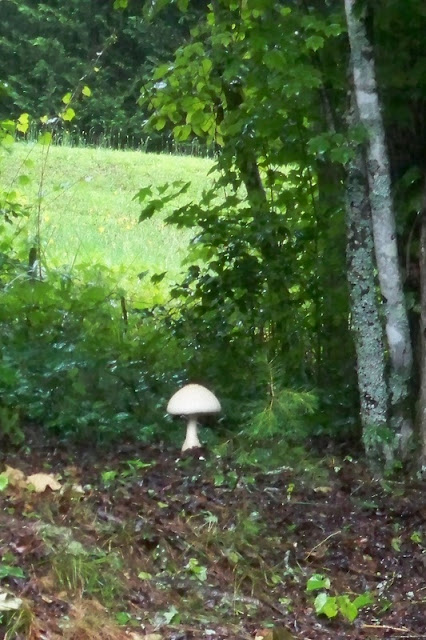 My Mushroom is GROWING! I've decided to name her Myrtle the Mushroom and let her live in our front yard as long as she can. She is obviously more special than any of the other mushrooms growing in the shady wet soil on our slope from the road to the house. I really believe in Myrtle. I think she's unique... one of a kind... special... and I will chart her progress here like my own little mid-Summer science project. You're all welcome to  join in the fun... send me your mushroom photos... who knows? Maybe our mushrooms will hit it off and we'll have baby mushrooms! 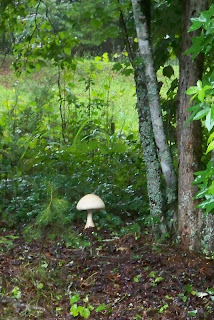 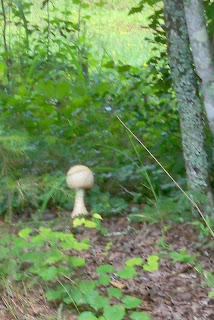 The one on the right is from yesterday. You tell how Myrtle has changed in the last day. I'll go out and take another picture at first light (if we have daylight tomorrow... they're saying it's a total washout of a 4th.) Eh. It's not like I was going to find somewhere to sit for hours in the midst of a swarm of sweaty people waiting for thirty seconds of ooooh and ahhhhhh! (If I wanted that, I'd re-enter the dating pool. Just kidding, Pop).

So today we had to play a round of "Reality Bites" with Austin. Initially when he asked if his girlfriend, Leann, could move in with us, there were a ton of stipulations and at that time, she really had nowhere to go. And although she didn't have transportation, she was working with a family member who committed to get her back and forth to work. They were given use of Austin's bedroom (I offered mine and he declined) and I encouraged them to use my living room area in the Whine Cellar for hanging out. My instructions were simple: they were to leave no footprints. I meant that in a literal and figurative way. The upstairs should be totally unchanged at every moment they were not in the process of cooking or washing clothes. Instead... we come home to a stove covered with dirty pots full of grease... a sink full of dishes... clean laundry in baskets waiting to be taken down to their room. They were supposed to carry their weight financially, they had responsibility for keeping the yard up... and then she lost her job. She couldn't find a new job because she didn't have a car. And ultimately, she decided to move to Alabama to live with her dad and get her life in order so that one day in the future she and Austin might be able to have a place of their own. That was two months ago. She's working but miserable living with her dad. Austin hasn't done a durn thing to improve their possibilities. He sleeps until 4pm every day, hangs out with his friends, bums cigarette money from me and has a thousand excuses why he can't apply for jobs (already has applied everywhere in town, nobody's hiring, they can't read his handwriting, etc) and a thousand reasons why he can't so much as cut the grass or wash his own dishes or... you know... act like an adult in any sort of way whatsoever.

Last night I prayed that God would bring about change in his life... that Austin would be filled with a desire to grow and learn and be responsible and ambitious and have a plan... and execute that plan... to have his own independent life as a contributing member of society. He's not a bad kid. He's got a sweet and kind heart. When he is motivated, he is a good worker. A mediocre worker at least. He has a great sense of humor and is very loyal to his mom and his Mawmaw.

So today... Austin informs us that Leeann now has money for a bus ticket and the first months rent to live back here with us. I very slowly, measuring my words carefully so as not to incite a riot, said that Leeann cannot live here. It's not about the rent (but yes, my parents so generously give me a roof over my head and keep the utilities on and make sure I don't starve and they do the same for Austin) but truly, it's my parents having to accept responsibility for this young lady. And what if she doesn't find a job here - or gets fired again - how many interruptions in her ability to keep up with their end of the bargain? And how many random people will they bring through our home. Most of their friends are decent people but we don't know them all and we don't know that we can trust them. But the bottom line, the most important thing is that Austin is not mature enough to participate in a cohabiting relationship. If he had been doing everything in his power to a) find gainful employment and b) man up and do everything he can around this house to help Mawmaw and Pop then we would extend a large measure of grace and help them along. Instead we get grumpy, complaining, uncooperative, surly teen whenever there's any chore that we have to remind him about. That's not fair. My parents are finished raising kids. I'm finished raising kids. This is their retirement home. It's not fair for them to have to sacrifice their peace (mine too) for two kids who don't have a clue about how to be good neighbors or even the basic responsibilities of adult humans.

And at the end of the discussion there was a good bit of stomping and door slamming and bitter boy. Aunt Linda and Cousin Devyn came over with a new recliner for us - the kind that raises you up from sitting to standing- and the three boys, Austin, Devyn and Logan took care of that - moving in the new, rearranging the old - and then Austin took off to spend the weekend with Logan - at least until Sunday, he said. And as I've said before, I love my children, I would love to have all of them gathered up to me all the time. I'd love to be the kind of mother that her kids can't stand to be away from but... let's get real... my kids fulfill obligations periodically... they don't seek me out to see how I'm doing or ask if I need anything or whatever. I am apparently too successful at untying the apron strings... because I've gotta tell you... if he's going to come back with that same attitude on Sunday... I don't care if he doesn't come back. Not that I want him gone out of my life forever - I just want him to do whatever it takes to grow up and learn that a man doesn't stay up all night on x-box and wait for his girlfriend to earn enough money to take care of them. A man gets a job, finds solutions for their problems that don't include a free ride from the grands and treats his mother and grandmother with respect. Minus that respect... I just don't have the emotional capacity to deal.

Other than that... it was just another rainy day in paradise. 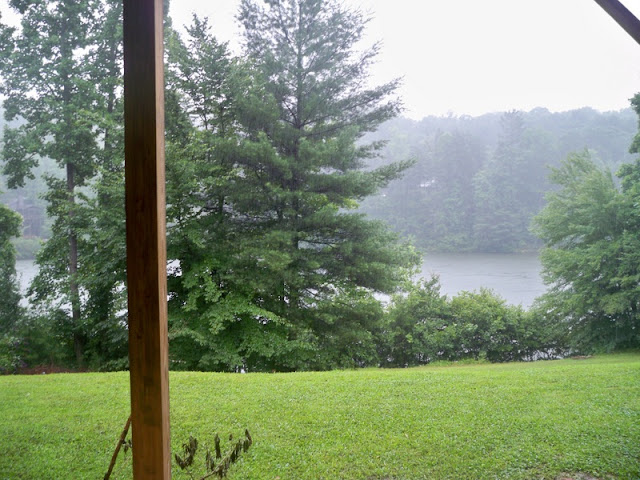 I can relate on some issues.....it is tough

It hurts I know. We have some similar issues happening here as well with the oldest. I feel you.