The 5th of July

Two years ago today our duplex got struck by lightning and we had to move. It was a time of real discouragement for me - having been newly diagnosed with all my back issues, struggling to work full time at least one more year to get Austin through school, barely able to function at work and definitely not able to function AFTER work. Thank God for Renters Insurance... we found a new place... they cleaned all the stuff that could be kept and returned it to us at the new place... they gave us an inventory of the items that were lost forever and we were able to be reimbursed. It was a lot of work but it could have been soooo much worse.

Two years ago today is the day that Little Trouble Kitty came into our lives. My Cousin Christie picked him out from a litter at  her vets office... my daughter-in-law Marquee kept him at her house until my friend Tami was able to bring him up from Riverdale to Cleveland for me. And before I ever even laid eyes on him... the fire. I had five minutes to be concerned about a cat. Noway he could go where we were going (Jim and Angie's - Jamie's allergic) so my parents drove up from Riverdale and picked up him and Stubby (and Austin) and took everyone back home with them that night. Ten days later we were moved into the new apartment and I could have my fur babies back home with me. From the moment we settled into the new apartment that kitty was MINE! He has cuddled with me from day one. He is wherever I am. He's a great companion and I love him about as much as you can love any other living thing. 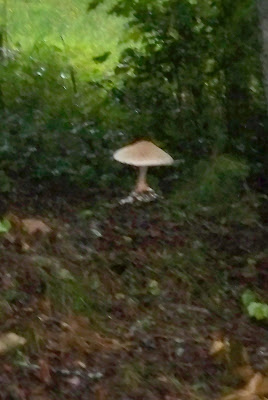 Miss Myrtle Mushroom has survived yet another day in the shady fairy forest land right in front of our house. This picture is blurry because it's raining and if I waited until post-rain -it would be dark.  Tomorrow I'll try to go up in the fairy forest land and get an upclose and personal expose of Myrtle and how she came to stardom in the midst of our front yard. One of her friends lost her top last night... she went from umbrella head to looking like she was carrying a flat sheet of poster board on top of her head... and then... she completely lost her head. It wasn't pretty. That's the thing... we know that Myrtle is only with us for a short time. She will have fulfilled her duty and I know, sadly, that she will be commended back to the earth. From earth she came, to earth she'll return.

We also have a baby mater hangin' on the vine... praying that it will grow big enough to make it into my belly. I made this one all artistic so you could see JUST the baby mater.

And then, at the bottom, that's our cucumber plant. I could live on maters and cucumbers all summer and be happy as a lark. Or a crow.... since that's what seems to be nabbin' our nibble's before we get to them. 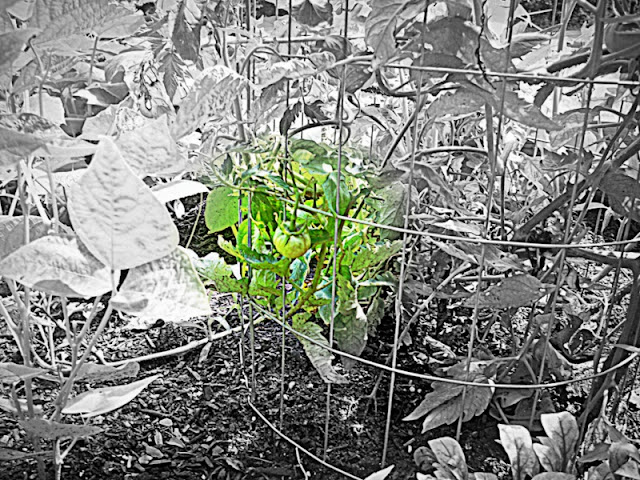 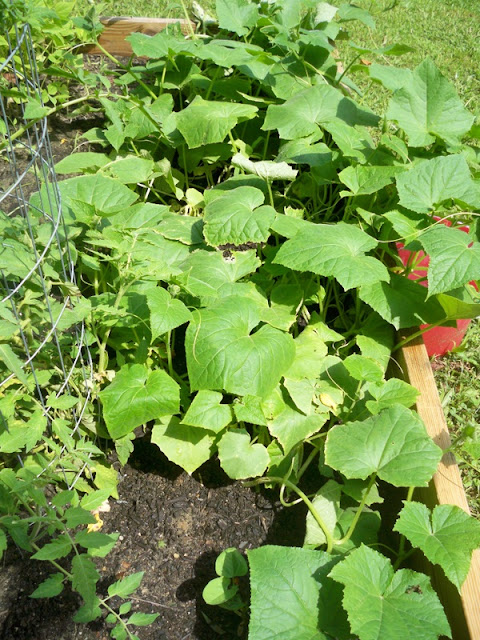 The thing about these mountains... this town... these people... is that people are real. They grow their food in their yard. They share with neighbors. They aren't trying to be trendy, hipster folks... they're just country folks feeding their families the same way their grandparents and great-grandparents did. I'm a lousy gardener but I totally support the importance of having one, of supplementing what we can buy in the store - with no knowledge of what kind of farm system grew it, not knowing what type of soil, what type (if any) chemicals they put on it. The taste of home-grown vs. store bought is unbelievable! I just can't wait for this little garden to start growing my dinner!

Speaking of eating... I finally got my food stamps approved and although it was a heckuva pain in the rear to wait on hold for over an hour, get approved and then since I didn't have the little EBT card where they load your benefits, I had to order one. And since once, in 2000, when I was out of work and the kids' dad wasn't paying child support and it was just me and my three boys and the grace of God getting us through, I had one of those cards and lost it... well, apparently, I should have hung on to that card. I would have had it all approved and money loaded today. But since I moved six times since then and suffered a fire in our home two years ago today and lost all kinds of random records... I didn't have that. HECK... I married well, I thought I was never going to have to be poor again. You just never know, do you? When I called to order the new card I had to be able to give them the address they had on file for us at the last time I had this card. It was the trailer. I. COULD. NOT. Remember that address. I mean, it's been 7 years since I moved out... I've slept a few times since then. I wiped my memory of all things trailer park. Since I couldn't give the correct address I have to go to our local DFCS office and get them to authorize the issue of a new card. I put my thinking cap back on and finally remembered... called back... on hold for another fifteen minutes... and got it worked out by giving the correct prior address so now they're mailing the car to me. I should have it soon. In the grand scheme of things, it's not a bad trade off. As long as my income remains under $1500 a month, even after I get the disability, I'll still qualify. So thank you, my friends and family members who are hardworking, taxpaying Americans. I would much rather be free of pain and be able to work but since I can't... I appreciate the generosity and I promise to be a good steward of what has been given me.

In other news...
Austin is still with Logan. Guess he'll be back Sunday like he said.

Mama is heading back to Riverdale tomorrow. It will be lonely here without her and the goggies.

I'm just settled in, trying not to get stressed by all that is involved in the disability process. There's a ton of paperwork that will have to be processed with my attorney next week... all the nitty-gritty of symptoms and problems and drugs I take... there's so much wrong that I feel like it sounds like I'm exaggerating. I wish I was. It's the elephant in the room, wondering if/when the disability will be approved but I'm trying not to let that elephant stink. I'm doing what I can... trusting God for the rest.

We had a bit of sun today but around 6pm it started raining again. I'm not minding the rain. I mean, I hate that it increases car accidents and causes flooding and that ugly aspect of it but I really like the milder temps.

I'm really hurting tonight. I think it's time for me to wrap this up and cut it loose. Hope you all have a beautiful, safe weekend.

Been raining here too on the east side of Nashville. Coming up from the south. Like you, I am really liking it NOT being hot.

Hope you get all approved. It's hard to remember old addresses and old phone numbers and such once you "move on". I often use that phrase "I've slept since then." I'm sure people at work are tired of it. But at 50...once you sleep or blink -it's forgotten. lol Stay dry!