My Thoughts on Grandbabies... 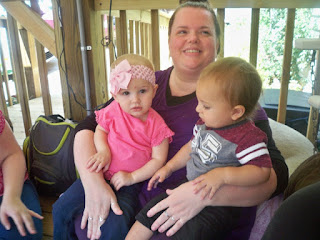 This has been probably the hardest Summer of my life which says a lot considering... there was the Summer after the kids' dad left and then our landlady kicked us out because "she would only rent to families, not single moms". Then there was the Summer we lived in Jacksonville and my world was unraveling more and more every day. Then there was the Summer that our house got struck by lightning and we had to move. The Summer I had to move back in with my parents because I was no longer able to work. I've had some doozies. So when I say this was a hard Summer... know that it takes a lot to rank up there because I have had some crummy Summers! 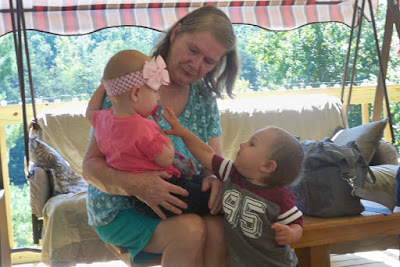 Being a grandmother is not something I thought about much in advance. All of my life, as long as I can remember, I wanted to be a mom. My career goals growing up were "whatever it would take to be able to take care of my children" because being a mom was the ultimate level of achievement in my mind. I haven't changed that opinion - for myself. I know it's different for everyone. This is what mattered most to me, to be a mom. 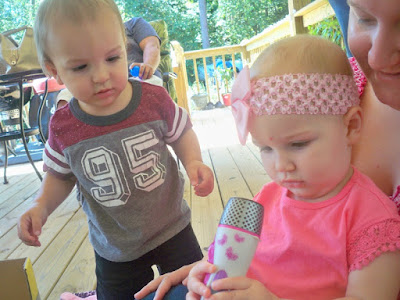 Obviously I realized that there would someday be grandchildren, probably. I just never thought much about what that would mean. The amount of love I have for my grandchildren and the bond I feel to them has taken me entirely by surprise. The way I feel when I'm with them... better than anything I've ever experienced in my entire life. Not to sell my boys short... I love being their mother and I still consider them my greatest success in life. I am prouder of them and their accomplishments than anything I personally have done. But where my sons are my pride... my grandchildren are my JOY! 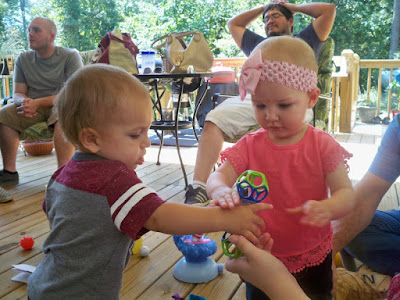 When Austin and Tasha's relationship deteriorated and then had such a dramatic end, I truly wondered if Cosette would ever again be a part of our lives. I knew that we could go through all the legal steps to involve her in our life but I knew that it was never a slam dunk. I had no idea what would happen. And even when we were given temporary visitation privileges, I still had no confidence that she would ever really be with us. I especially had no expectation that I could get Oliver and Cosette in the same place. We have her on Thursdays. Cody works on Thursday. 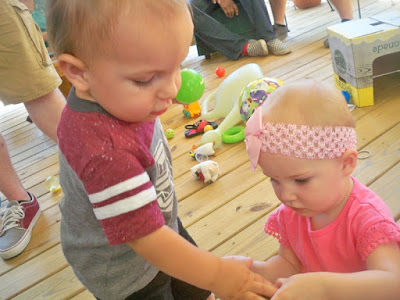 Just as I have encouraged my children to have close relationships with each other... I also want my grandchildren to have close relationships. I have some awesome cousins who, although we don't spend much time together, have been a treasured part of my life. The older I get, the more important my cousins become to me. Through Facebook I have connected with cousins that I barely knew in childhood. Even second cousins and distant cousins are a precious part of my life. I want my grandchildren to have each other to lean on throughout their lives so it's important to me that they spend time together. 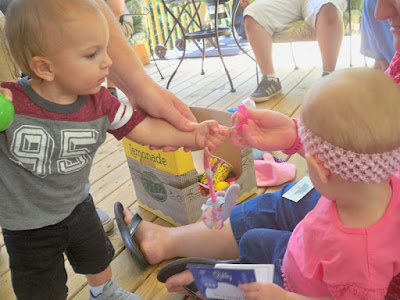 That's a long lead in but I wanted to give some context for yesterday. I know that Oliver and Cosette are too young to remember the things that happen in their lives right now. But I also know that forming family relationships is a lifelong process. They may not have memories from yesterday but when they see each other again - at Thanksgiving and Christmas and whenever - they WILL remember each other. It's been interesting to watch Cosette's reaction to seeing us after our separation this Summer. She remembered her daddy. She remembered "Oof" the dog. She remembered Nana and Mawmaw and Pop. Yesterday I noticed that she was really interested in her Aunt Marquee and she seemed to understand that Marquee is Oliver's mother. For instance... he dumped over the toy box and Cosette immediately looked at Marquee to see what she would say. Cosette made an "O" with her mouth and was going "wow". 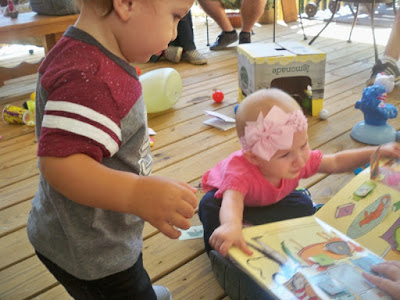 In the thirteen months since I've had TWO grandchildren, every time they get together has been precious. We had to make sure Cosette wasn't too rough with Ollie when he was tiny. Then we had to make sure Oliver wasn't too rough with Cosy once he grew bigger and more... enthusiastic... than she is. He's a strong boy. We wondered how they would do together now that they're about the same size. She is delicate. He is BAM-BAM - all boy. Cody's friends Craig, Jose and David had come up with them so there were three extra men around that Cosette didn't know and she doesn't do well with strangers, especially men. There was awkwardness, of course, with Tasha and her dad because it has been a hard Summer and we have been involved in an emotional legal process. Ultimately, though, what matters is family and these babies are family. Cosette was fascinated with Oliver and Oliver did everything he could think of to get Cosette to play. He was really gentle with her and offered her all kinds of toys. There were a few times they wanted the same thing... he was very interested in her pacifier. She was not happy that he had her Cat in the Hat book. They're both used to being the only child and the center of attention. All things considered... I thought it went really well. 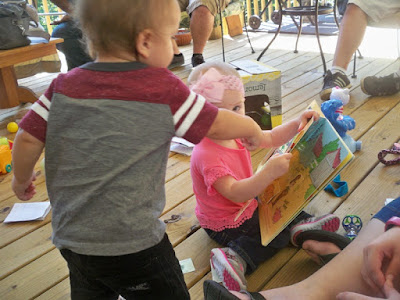 I took tons of pictures. I posted a lot on Facebook yesterday. I have some more on my phone but I haven't been able to get them to transfer yet. Sorry that you're seeing duplicates today. Most of the time the babies are near each other but not really playing together. We only got a few pictures of me with them and I look awful in all of them. I wasn't feeling my best but I always push myself to give them all of my attention and love when they're around. What mattered most was for the babies to have a chance to bond... for Cody to have a good birthday... and for everyone to just enjoy being together. 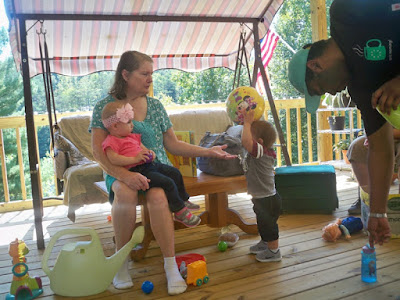 I am exhausted today and every inch of me hurts. I feel like I was hit by a truck! I don't know how much longer I'll be able to actually get down on the floor and play with them. I don't know how much longer I'll be able to pick them up to get cuddles and kisses. I definitely pay for it the next few days after I'm with either baby but... they'll only be little for a short time. I have no idea how well I'll be able to get around as they get older. I just try to take advantage of every opportunity to play with them. They're beautiful, fun, creative, loving, amazing little humans and I'm so glad they're mine! I think they look a lot alike... do you agree? 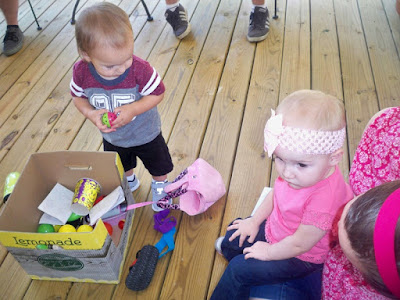 Thanks to Pop for putting together a great lunch for us. Thanks to my mom for getting things cleaned up for everyone to come over - when she is still recovering from a busy week of medical stuff. Thanks to Cody and Marquee for coming up... and to Oliver's "Uncles" Craig, David and Jose for coming along to add to the fun. Thanks to Tasha and her dad for being willing to bring Cosette over to play and for working hard with us to build a happy life for Cosette. Thanks to all of you who have covered us in prayer this Summer and who continue to pray that everything will be sorted out for Cosy to be able to spend time with our family. Thanks for your encouragement and interest! Love and hugs and happy Labor Day weekend to everyone! 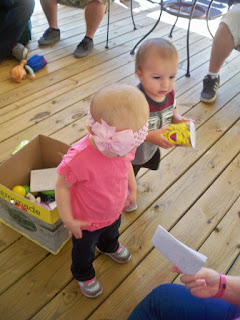 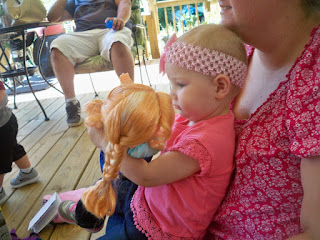 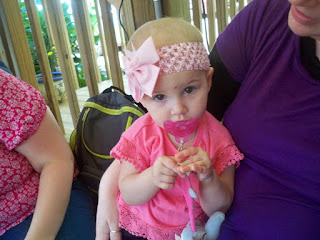 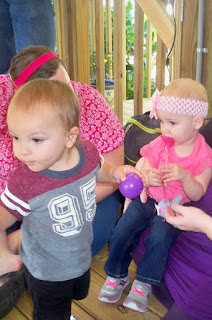 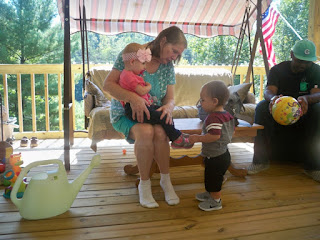 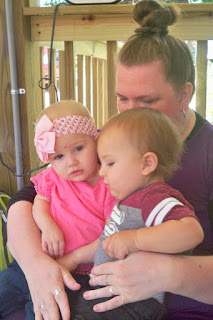 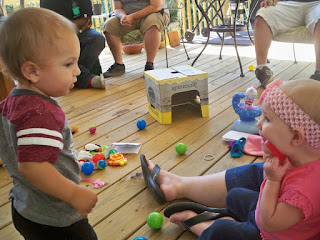 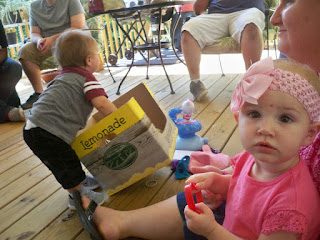 You are more than welcomed.
I think the babies profiles look alike.
I'm sure in person there are similarities.
They are both precious.
I'm glad you were able to enjoy them together &
making memories. Hopefully you will recover from
their visit soon.
Thank you for sharing once again,
xoxo m~

So adorable those babies are! Lucky gram.

Your mom is so thin... I hope all will be ok with her.