Today I have been resting and watching stuff on tv. In other words.... the same thing I do most days. I did, however, work on my family tree a bit, which I haven't been doing lately (although I have been paying for it and ancestry.com is not cheap!). I also built a pinterest board for my bathroom redo... because my mom needs a project. She wanted to clean out my closet yesterday (shakes head no). Today she cleaned out the buffet (is that a word that people outside of the South understand?). She just can't sit still. I, on the other hand, could be a mannequin. I also apparently have a thing for parenthesis today. Sorry.

I'm wanting to do a light purple bathroom with sort of a mermaid theme. Christmas wish list! So much cute mermaid stuff! So maybe the purple and a bit of a teal color. Click on the link above if you want to see what I've pinned for inspiration.

I had this great idea to share with you the k-cup teas that I have been drinking lately. It sounded far more interesting in my mind than it will probably be for the .0002% of you who use a keurig to make hot tea. I also thought this would be a much more blogworthy and artsy photo of my top tea k-cups (t-cups?) than it turned out but I'm too lazy (tired, in pain, not just lazy) to try again. 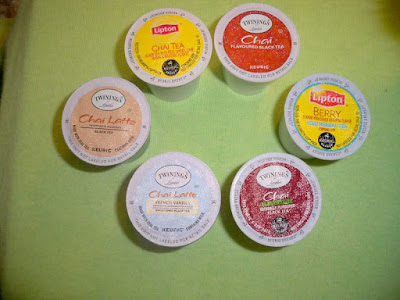 Basically, I've had a thing for chai lately. The boxes of k-cups with tea are overpriced, in my opinion. As far as I'm concerned... whether it's coffee or tea in the keurig, I don't want to pay more than 50cents per cup - and even that is too much but I do enjoy the luxury. Coffee, especially because otherwise you're measuring (yes, that's a factor) using a filter, etc, so there are times that if it wasn't in a k-cup, I wouldn't bother drinking coffee. Tea, however, is not as labor intensive. I mean, it comes in bag or loose leaf. I have the little loose leaf holder thing and ... maybe it takes a second to portion it out but you can just run water through the keurig and toss a teabag in your mug. So for me to buy keurig cups of TEA it has to be a good deal.

Walmart, Ingles and Amazon (the only three places I shop with any regularity) all charge more than my preferred budget of less than 50cents per cup. HOWEVER... Amazon Prime Pantry has lower prices on the boxes of k-cups. The way Prime Pantry works is that you pay $6 for shipping if you have Amazon Prime for up to a certain weight of grocery items. I usually shoot for low weight items - same theory as not putting salad dressing on your salad when you're buying from a salad bar that charges by the weight. I stocked up on chai k-cups a month or so ago and I didn't pay more than 30cents or so per k-cup. The six dollar shipping charge... I had bought something through Prime that I didn't have to have right away. There's a feature on Amazon Prime where if you can wait for the item, you get a rebate. I had a rebate that covered the cost of my Prime Pantry shipment.

I say all of that to say... once I run out of tea k-cups, I likely will just buy tea bags unless I get a similar deal. But for now... and probably for a few more months... I'm enjoying my large haul of t-cups. I like the Lipton teas - the chai and the berry tea - more for iced tea. They're ok hot... but better iced. I drink a lot of iced tea lately. Way too much iced tea. It's a phase, I'm sure it will pass. The Twinings teas, however, are really great hot. My theory is that since Twinings is a British tea company and the Brits prefer their tea hot, it's formulated to be best hot. The chai tea lattes are really nice as they have a little bit of a creamy consistency. I add sugar cubes to my hot tea. The reason I don't use loose sugar is because there's a lot of humidity in the Whine Cellar and seasonings tend to clump. Also, because I don't want to have to spoon out the sugar... since I don't have an actual kitchen, my surfaces aren't "counter-ish" and so if I have a little sugar mishap it's harder to clean up. Cubes are just easier.

And that's my story. 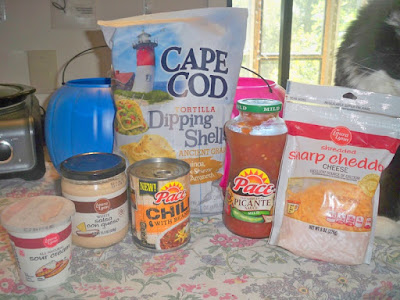 I also have an artsy photo of the ingredients for our supper but maybe I'll spare you save that for another day. Oh, what the heck. Nachos. We're having nachos. Pop eats dinner at church on Wednesdays so we have to "fend for ourselves". Nobody else likes to cook... or probably more accurately nobody else has the energy to cook at the end of the day. I found these healthier corn chips and I thought... hey... less carbs... maybe mom can eat these... and I found the canned chili (which we've never tried before) and the canned cheese (which we have probably had before, I don't remember) and I thought... we could do this. I'm leaving in about a half hour to pick Austin up from work... also need to pick up the prescriptions that I dropped off on Sunday and forgot about. When we get home I just need to heat up the chili and cheese. I also have corn leftover from lunch that I will do as a side. Maybe.

Today's pain of the day is the left shoulder, closely followed by the right butt cheek, aka as "piriformis syndrome". I've gone through half a tube of arthritis rub on the shoulder today and it's still killing me. I think I'm going to have to see a doctor about it. The pain doctor did a guess-diagnosis and tried injections but it's getting worse. I'm not willing for my left shoulder to hurt as much as the rest of me hurts because I'm left handed. I want to sew again. Or color with sharpies. Or whatever. Any pain that can be treated in any way other than needing more pain meds needs to be dealt with.

That's my life, folks. Hope you enjoyed my dissertation on tea. Let me know if you have any questions or comments. (shakes head no). Happy Middle of the Week, love and hugs, y'all!