Glasses and Weight and How Cute Is My Oliver?

Today I picked up my new glasses, Cosette had her 15 month checkup (late) and we had hamburgers and homemade fries for dinner. The end.

See how easy it is to daily blog?

Seriously. There was more to my day but not a lot more. Austin got new work pants because he has lost so much weight his clothes are falling off of him. He's down to 155 or less. He just was under so much stress this Summer that he stopped eating. Once he stopped eating and his gut went away he decided he kinda liked his new physique so now he's being more careful about what he eats, which I guess is good. We had that dressing room moment that every woman dreams of where you say, "nope... these are too big, bring me the next size down..." Don't you hate him?

Cosette weighed in at 19 lbs 14 oz at the doctor today so she's still a petite little diva. Her mom got her a Starbucks afterwards - strawberry and creme frappuccino. I remember Cody and Austin both being 20 lbs at a year old. I don't remember much past then, as far as specific weights but they were both tiny for a long time, up through middle school. Ryan was never chubby but always solid. He isn't chubby now. None of my boys are. I think Cody is probably the heaviest of the three. Their dad was 5'9, 140 lbs when we got married and I'll bet he's not far from that weight now. Cody is slightly over 200. Ryan is probably halfway between Cody and Austin. Austin has never been huge but he was soft in the middle.

How is this blog all about weight so far? Really, a slow news day in my world. 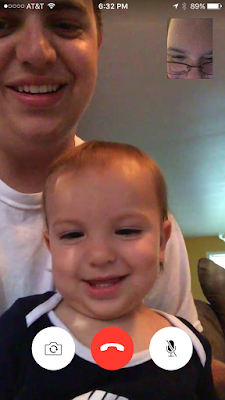 The homemade french fries for dinner were good. I had gelato for lunch and I can't remember eating breakfast so I'm pretty much on a carb fast today. I also don't have an appetite but... that means I just eat carbs and gain weight, no matter what the quantity of food. It's been a pretty intense pain day. I had to get out this morning to run a few errands (picking up glasses, buying work pants for Austin, for example) but I was just in too much pain to hold off on pain meds until after Cosette's dr's appointment so I didn't go for that. Did I mention I was going to tag along for her checkup? Maybe I didn't. Anyways. I was going to but I ended up not doing that. I've just kinda sat here all day watching YouTube videos and playing games on my phone and trying to stay on top of the pain. It's my low back today. When I get up and try to walk I'm walking like I just got off a horse. So graceful. Aging isn't pretty. Reference first photo.

This one is cute. Oliver was trying to grab my glasses off of my face on Facetime. He hasn't quite wrapped his head around how Nana is inside the tablet his dad calls me on. I can hold a spoon up to the screen and he'll try to take a bite. He leans in to kiss the screen. And tonight he thought he could get my glasses off. I've got a feeling these glasses aren't going to survive my two amazing grand-toddlers. One last cute picture from tonight... the rest I'm saving for Facetime Friday...

Hope you had a great Tuesday! The week is flying by! Love and hugs, y'all! 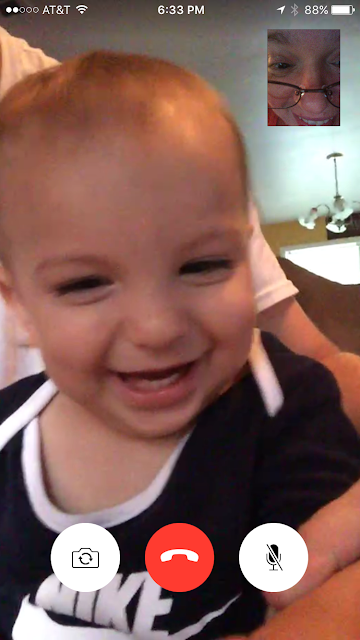 Just to cute!
I wish stress made me lose weight! I lost a lot and then slooooooooooooowly... decided I like food more... bla.

Anyway... my grand daughter and grand son were very small at a year and now.. @ 2 and 6 not so small ! They catch up quick ! And tiring .. omword.. crazy... they were here today and let me just say they are busy, busy! Love it that they leave and I can pick up and be done. I guess that's why they have young parents!

That's one happy baby boy.
I like your glasses.
I need new ones myself.
/@@/
monica