I'm still recovering from Cody's birthday party on Saturday / last Thursday / life in general. I don't have the energy to do anything except sit and watch Netflix and Youtube. I have a touch of a cough/stuffy nose/sore throat happening too and it's combined with fatigue to just give me a roaring case of the blahs. I could seriously have slept the weekend away. 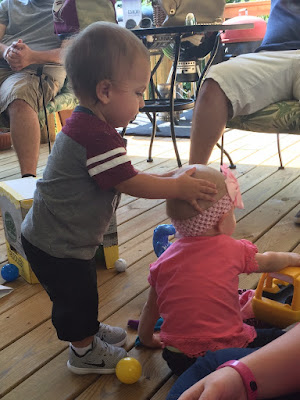 At least if I did sleep the weekend away I would have had sweet dreams...

I'm still feeling all the feels from having my grandchildren together for the first time in four months. These are the photos that were on my phone. No masterpieces, just snapshots of how amazed Oliver was with Cosette. I love how he's checking out her head so gently! They really don't know what to think about each other.

If you think about it... when I was little I got to know relatives through visits (duh) and phone calls and written communication. Oliver sees me several times a week on his dad's tablet. Cosette sees Oliver in my phone. Going from screen images to three dimensional human beings has to be weird to understand as a toddler.

I am gearing up for a busy week. Seeing the eye doctor tomorrow for the first time in... six years or so? I can't remember the last time I went. My vision has definitely deteriorated. I canNOT see to drive at night and I use "cheaters" when I read or sew. I set myself a goal of getting back to sewing tomorrow after I see the eye doctor but... then I remembered that you see the doctor and then there's a period of time before your glasses are ready. So I might not sew tomorrow. Wednesday I go to the dentist. Grrr. I hate the thought of having more dental pain but I have to get the process completed. Thursday we have Cosy, my mom has a doctors appointment and my parents are having a new washing machine delivered. Things could get crazy around here! 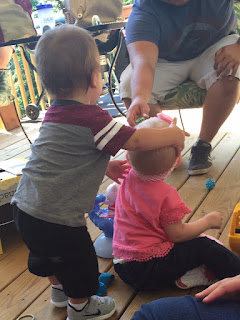 I'm going to try to stay up "late" (for me) tonight because Florida State is playing and there almost always is a Pop Quiz with Cody at some point. I watch a lot of football but I don't absorb it like he and Ryan do. They'll say, "did you see...." and nope. I never saw what they ask if I saw. BUT I'm trying! It's interesting to my kids so it's interesting to me. I can't always apply that concept but I can with football. I actually understand the game of football quite well. Part of our cheerleading tryout in 9th grade was a written test that included questions on football, which makes sense... you don't want to be cheering for the team to score when you're on defense.

I learned the basics of football while with my friend Dewayna's parents- who I always referred to as my godparents although they didn't have that title in the traditional sense - as we were Baptist and you're baptized as you come to the age of understanding, not as a baby. Ironically, Dewayna's grandmother was one of the people helping with the baptism the day I was baptized  - at the age of seven. Our church was old and it was cold and Granny kept hugging me to try to keep me warm as I waited for my time. She said, "come let me hug you... fat old granny will keep you warm". I'll always remember that. Anyways. Sorry for the sidebar there. Dewayna's parents were season ticket holders for the Atlanta Falcons back when Dewayna and I were maybe 9 - through teenagers. Every Sunday they were either at the game or watched the game on tv if it was an away game. A lot of Sundays I went home with Dewayna after church - this is where I saw my first microwave oven! - and some weekends I went with them to their lake house for the whole weekend. They also had a condo in Panama City but I don't remember being down at the condo during football season. At any rate... they watched a lot of football so I watched a lot of football. Dewayna's mom taught me the basics - four chances to go ten yards, etc. Also... I grew up in a house with four brothers and one tv so I watched a lot of sports... and a lot of Scooby Doo. Which I hate to this day. 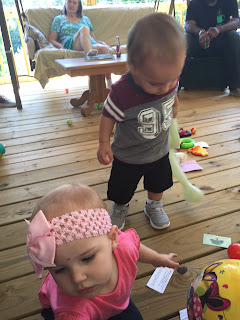 At any rate... Florida State plays at 8pm and I'm usually halfway to sleep by that time so I'm going to try to stay up "late" to watch the whole game. My eye doctor appointment isn't until lunch time so I don't have to get up early tomorrow. I'm sure I still will. That's just how I'm wired.

Last night and today I watched a short series on Netflix that I found pretty funny... it's called "Very British Problems". I think there are about eight episodes. It pokes fun at the British stiff upper lip and lack of emotion. A lot of the things they pointed out were things that I would consider introvert characteristics. I sat there thinking... I must be British. Who knew? I mean, I know many centuries back but I have some seriously deeply ingrained Britishness in me.

There was a series Cody wanted me to watch on Netflix but I forgot what it was. While I was searching through to see if something would trigger my memory (nope) I found the "Very British Problems" series. I know Cody wants me to watch Lilo and Stitch - because he thinks Oliver is all Stitch but I have a hard time staying focused on kids shows unless Jamie is here to explain the plot to me. Austin was shocked the other day that I had never "watched" Mulan. The truth is that Austin was such a wild tasmanian devil that any time he was still for two minutes I had to rush around doing everything I couldn't do for watching him. There are a lot of Disney movies that I've HEARD a hundred times but have never watched. I demonstrated this to him by being able to sing along with the movie. Once he got interested in a movie, I had too much to do to watch tv.

I thought this was going to be a really short blog because I literally have done nothing but sit for the past two days but ... there you go... an actual blog. Didn't know I had it in me! Guess that nap I had this afternoon helped a bit. Oh well. Hope you've had a great extended weekend and I hope your Tuesday doesn't end up feeling like a Monday! Love and hugs, y'all... more pictures of babies ahead!

I gave Cosette this swing for her birthday but we only recently got it hung properly to use. She's not sure she likes it... and Oliver wasn't either. My grandchildren may have my issues with motion sickness... 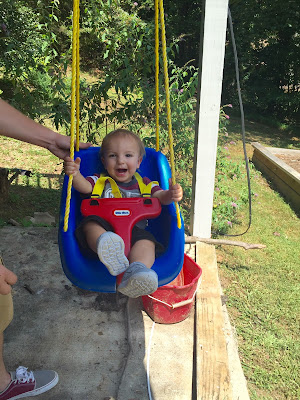 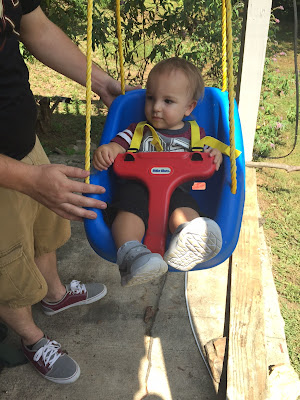 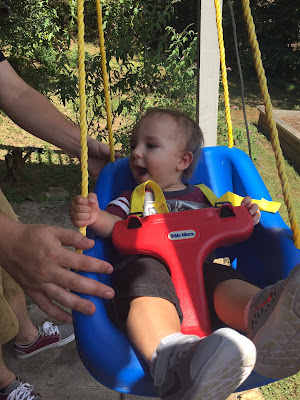 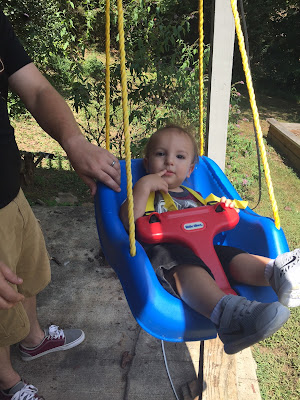 And this is Oliver's shadow. During Facetime last night he was playing with his shadow. It was so cute... but this is the only picture I got of it. My hair is a wreck... this is how bad I feel! 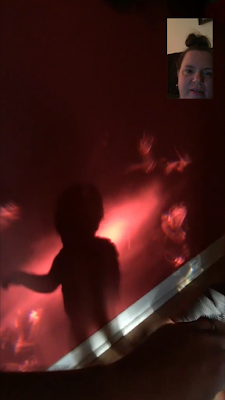