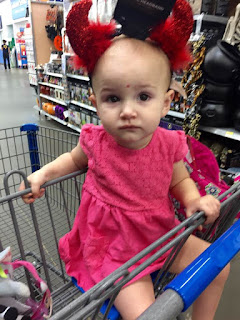 I had a rough night last night. The past few have been rough. I can't get comfortable. It's not as much fun as you might think.

This morning Austin went in to work and things had been changed... from where he worked to when he worked and... it's just a big frustrating mess. I want to go into a lot of detail here but it's not my story to tell. I will just ask that you keep his work situation in prayer. He works hard and some things are happening that aren't quite fair and don't make sense but I say that knowing that every time in my life that things happened that didn't seem fair... it was because God had something better planned for me.

I will never forget driving home from the unemployment office in pouring rain back in 2012 after finding out that some *less than true* things had been said about me by my previous employer. I was hurt, mad, discouraged, confused, stressed... honestly, I felt deserted, like I had gone to work for a Christian person whose actions towards me were anything but Christ-like. Then I heard a voice - in my heart or in my head or wherever these thoughts come from - that said, "what man means for your harm, I will use for your good". It's scriptural, not a complete translation, just the substance of what it felt like to me in that moment. What I couldn't have even dreamed in that moment was how useful the *less than truthful* information would become not only in my next job but eventually in my disability case. The things that were said were the exact things that boosted my case. 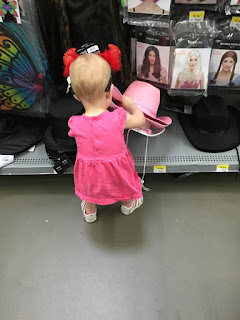 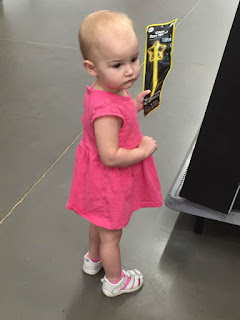 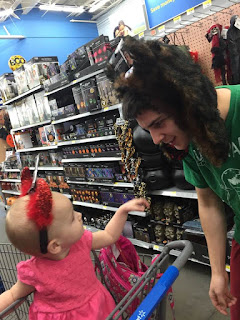 Anyways... not to dig up old bones but just as a reminder to myself and Austin and all of us, really, that we can never begin to imagine how God weaves these loose threads of our lives into a masterpiece. I mean, he's suffered some indignities but he's still employed.

The change in schedule had Austin off today and working tomorrow... when we were supposed to have Cosette. They also have him off on Sunday and working Monday - when he's scheduled for Jury Duty. Grrr. So at first he wanted to have Cosy on Sunday but realized that since he HAS to be off Monday, they might get him to work Sunday. Or they may just cut his hours even more which... again... so frustrating. He's been so consistent in his job... sigh. But the good news is Tasha was cooperative and had Cosy up and dressed by 8:30 for us to pick her up today. We had breakfast at Chickfila, then went to Walmart to pick up some things and then came home and played on the playpen porch for a few hours. 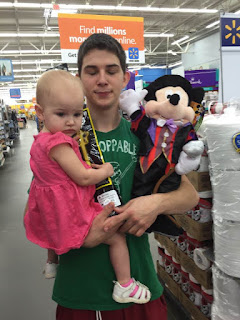 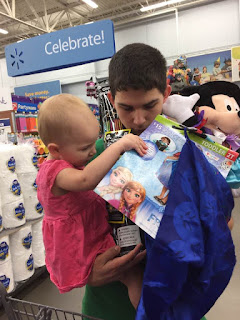 Daddy carrying all the things. 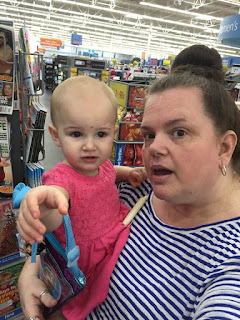 There was a stuffed cow by the cash register at Chickfila and I asked the cashier if they were selling them. She didn't think so but said she would check. She surprised us a few minutes later by bringing one out to Cosette - no charge. She said they had a bunch in the office and it was their gift. Don't those kind of things just restore your faith in humanity? They do for me.

Our Walmart run was for some basics but because we were in no hurry and Walmart was practically empty we let Cosy out of the cart and let her just wander around the Halloween section. She doesn't talk a lot but she is very clear with whether or not she likes something. She was really concentrating hard on which things she liked and which things she didn't. I'm sorry... but whenever the babies (toddlers) do things that are adult like it's like when animals take on human characteristics. I was so entertained by her thought process of checking out the Halloween selection, knowing that she has no concept of Halloween or what any of that stuff might be for. 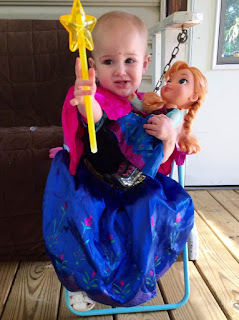 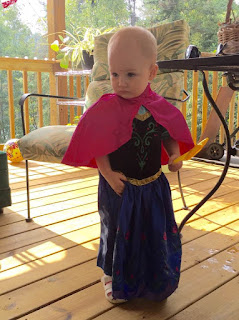 She ended up with a Princess Anna costume (from Frozen) and a cat costume (ears, tail and bowtie). She has only seen the movie Frozen maybe twice? Not much. But last December I took my Christmas money from my grandma and bought Cosette a matching set of Elsa and Anna dolls that sing. Best. Investment. Ever. She loves those dolls! Also, best marketing ever because anything with Elsa and Anna on it draws Cosy's attention. She even eats string cheese packaged in Frozen packaging. She at first wanted the Elsa costume but the one she grabbed was huge so we dug around and found an Anna and she was one happy little munchkin. She also picked out this ridiculous Mickey Mouse dressed in a suit and top hat that I went ahead and bought because I know Oliver will love it. She also picked out an Elsa and Anna purse. She wanted two of them but I convinced her that one was enough. She can't say Elsa and Anna but she will point back and forth between them and expects me to say "Elsa. Anna. Elsa. Anna." over and over. She makes a sound like "Eh. Ah. Eh. Ah." along with me sometimes. She also sings along to the dolls but not the actual words yet. 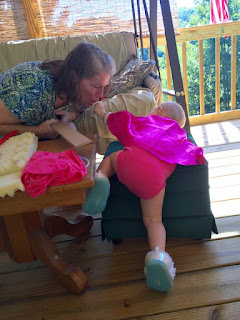 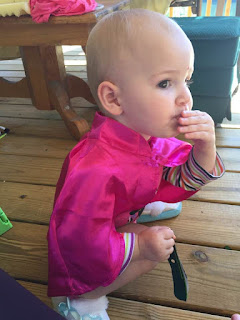 We evolved from the Anna costume into a onesie but she wanted the cape still. Plus the Frozen slippers. So she looks like a little Frozen Superhero. 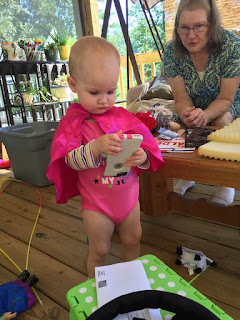 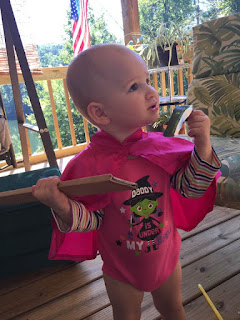 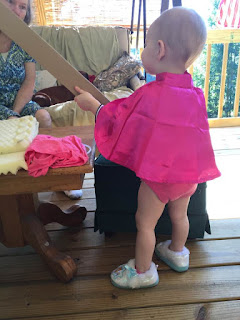 We attempted a nap but it wasn't in the cards today and since we weren't going to have her all day, we just waited until she was ready to go to sleep and ran her home quickly. Her mom is about a three minute drive away. While she was downstairs in my living room after the failed nap attempt, she noticed that I had cookie cutters in a container other than the container that usually holds the cookie cutters. She grabbed one and said, "hey..." and furrowed her brow and immediately got up and went to the find the correct place for the cookie cutters. My OCD Princess.

She also noticed that her clothes and diapers were scattered around... I fixed her diaper bag in a rush and Little Kitty climbed in the cabinet and kept swatting my hand every time I tried to get anything out. I gave up and just left him there... and he dragged a bunch of stuff out after I left. She started picking things up and putting them where they go. She is a big fan of taking things out and putting them back in. Today she spent ten minutes trying to put a cap on a marker. She also was insistent that the markers Aunt Marquee gave her that go with her magic coloring book needed to go in the container that I keep my sharpies in. OB....sessive. 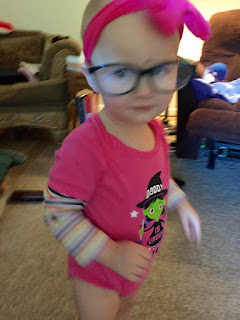 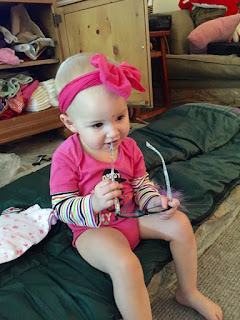 Anyways... how cute is she in my cheap-o Walmart cheaters. These are not my actual glasses that I wear. They are what I wore before I had actual prescription glasses. She wanted to wear my REAL glasses so this was a compromise. She was quite proud of herself with the glasses on.

I'm not happy with adobe photo software, especially since every time you sign in they beg you to sign up for the more expensive editing experience which is way more than I want or need. Still searching for something better. I edited the photos in this blog on my phone, just with the standard iPhone stuff.

And that's the end of my Wednesday. At least the part I'm going to blog about. There is a pint of gelato in my future. I hope your day ends similarly well. Love and hugs, y'all!