Remember how I told you the other day that Bitty "evicts" unapproved inventory from my counter? Last week it was the makeup brush that he eliminated. The makeup brush has become his new cuddle buddy. Here he is giving it an affectionate lick. How can you NOT love that sweet kitty? 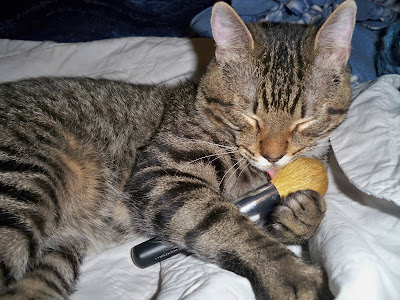 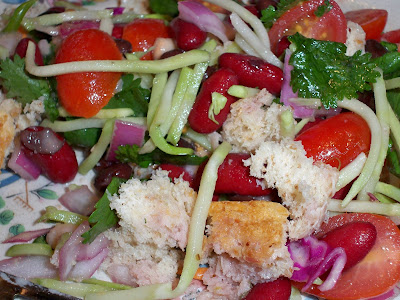 Day 4 of being practically a shut in.
Day 15 of being sick.
I attempted to work today but the pain was unbearable. I can't move my left arm without pain... and... I'm left handed.
I hated to have to leave work... I can't afford more time off... but... when I googled "pleurisy" there was a list of people who died from it.
Ok. I get it. Rest.
I have rested. I have barely spoken a word... done nothing but exist... and I sure as heck ain't moving that left arm.
Other than to eat. Did you see that gorgeous three bean salad? Mmmm!
Yet... I'm sitting here surfing through the blogosphere and there's this young couple with two precious twin daughters... one of the twins died in her sleep a few nights ago. 19 months old.
Another lady just suffered her sixth miscarriage. No idea of the cause... genetic testing shows completely normal embryos. They can't find anything wrong with her. Just sad.
My life... it ain't so bad. A little bronchitis... a little disappointment... but all in all... I can't (shouldn't) complain.
Remind me of that in the morning when I'm doing my Whiny Wednesday post.
I am having MAD nausea because of the antibiotic. Even taking it with food doesn't help. I had some phenergan so I've taken that tonight. The nausea is so intense that it woke me from a sound sleep last night. I hate it.
BUT... if clearing up the infection will clear up the inflammation and I can resume my normal crazy lazy life... I'll suffer.
Austin made a batch of pumpkin bread, just like I taught him. He also makes a great cobbler. I love that my boys can and will cook.
The kitties are fighting. Sibling rivalry.
When I was taking pictures of Bitty, Stubby "merowed" and preened for me. But... since he's all black you can't see his precious little face on camera. But he definitely loves the attention.
I think I'm too attached to my kitties. But they love me.
Whoever asked about what I eat my hummus with... and I mentioned the blue diamond nutcrisps... and I thought they were gluten free. I have confirmed... they are gluten free. I know you were all just dying to know.
There's a mad dash of a shopping trip in my future. Haven't bought much of nuttin'. Not the least bit worried about it. This is a no pressure Christmas for me.
And the cards keep coming... just got one from my friend Gina with a lottery ticket in it (we didn't win)... and pictures of my friend Amanda's kids... and Jeanne and her sweet family. I love going to the mailbox so much lately that I even went to the mailbox this morning with the 1 degree wind chill.
I think anything you smoke from a bong is trouble, even if it's legal, Miley. I'm just sayin'. Because I'm 42 and i don't know how to use a bong.
And... I guess that's all for tonight. Love and hugs, y'all.

The picture of Bitty made me smile. What a sweetie. I love my kitties, too, and I don't know how anyone could not love kitties. They are entertaining and affectionate but not nearly as demanding as dogs. My boy Ben likes to hold hands. If I lightly grasp his paw he falls asleep immediately... a holdover from kittenhood. Bug likes to be held on her back while having her tummy rubbed. Watching them snuggle together warms my heart.

It was good you stayed home to rest. I hope it gets better.

The salad looks great, my kitten has a thing for earplugs.. she especially likes to play with them in the bathtub. Oh and toilet paper too.

You've got to work on that cookbook in 2011 ... your bean salad looks so great! Every time you post a picture of your creations, I do this thing where I'm just not satisfied until I get to the store and try to re-create! Not kidding. And, I'm not a big eater at all ... just not. But, I would be if I had the knack of making the things you do.

Don't worry about the weight gain. Certain medications will do that. I have a slim build, but over the last year I had quite a significant weight gain. Not a huge deal, except that I have a really bad leg from a crush injury - auto accident- in 1999 (4 orthopedic doctors have recommended amputation since 2006, but I have RSD and don't want anymore surgery). Anyway, I needed to figure out where the weight came from because my leg really can't handle the extra weight. I finally decided to look at my medications ... duh! Well, doctor had prescribed a prescription antihistamine (among other things) to combat some allergies that creeped up on me last January. I looked all my meds up, and this medication was notorious for weight gain. I stopped taking it and the weight MELTED off in a little over a week. No change in my eating at all ... it was just the medicine!

So, that's my long winded way of saying, "Take care of your health ... take your medicine ... don't worry about the weight ... and once you're well, your weight will level off again".