what's cooking, photo finish friday (a day late) and the best comment EVER

If you look carefully... this is a HUGE spider web in our side yard... 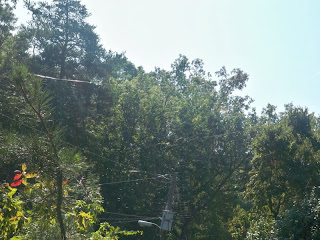 My busybody Bitty Kitty plants himself beside the spices proudly... 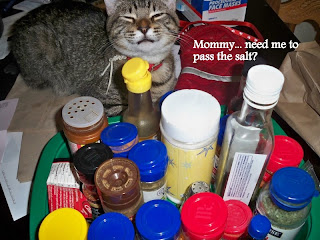 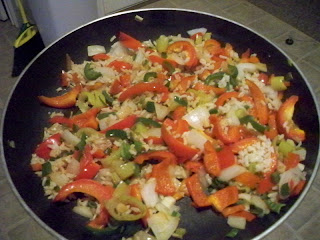 The new window being installed at the office... taking Kevin's man-cave into a real office with natural light... 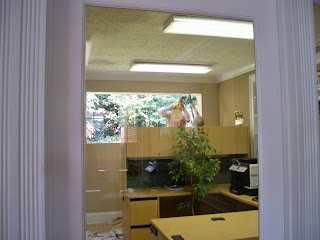 I'm obviously one of those people who loves cilantro... this is my 3 bean salad with red, white and black beans (rinsed to remove as much salt as possible) with 1 cups of sliced radishes, 1 cup of red onions, 1 cup of cilantro... red wine vinegar and olive oil. 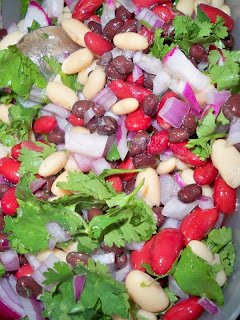 I'm just not a red tomato kind of girl... as long as Loganberry Heritage Farm is selling these beautiful heirloom tomatoes... I'll save the reds for winter when I can't get anything else but canned. 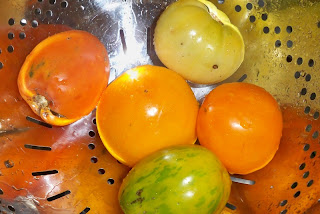 How beautiful and HUGE are these radishes? You may not be able to tell by the picture but they were as big as my fist... 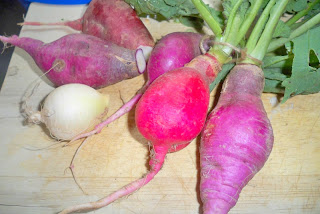 I didn't have the flash on for this picture but this is taboule... bulgur wheat with tomatoes, cilantro and avocado. 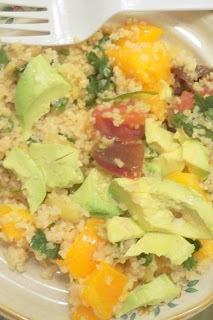 Another one I forgot the flash on... roasted beets and wheatberries with goat cheese and pumpkin seeds. YUM! 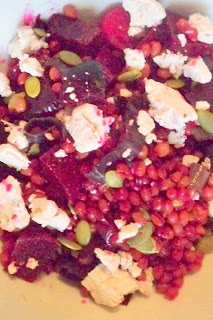 Today I have cooked like a madwoman... I bought some really nice okra today... big thick pods... so OF COURSE... I had to have some stewed tomatoes and okra. I used 4 cups of sliced okra, 4 cups of stewed tomatoes, 4 cups of collard greens, 1 cup each of onion and celery, 2 cups of fat free chicken broth and.... secret ingredient.... 1 cup of LITE organic coconut milk. That stuff is DELISH!
I made a breakfast salad of sorts... wheatberries, apples, a little celery, lemon juice and apple cider vinegar.
I made that gorgeous 3 bean salad above. Not the traditional kind ... so much better!
I made panzanella again. The bakery had some day old - half price bread - and I had a mess of wheatberries cooked up so I doubled the recipe from last week. I also had some really nice fresh basil to use this time - last week I only had freeze dried basil. Those incredible colors of tomatoes... and it's so good!
I bought turkey burgers for Austin... organic antibiotic free chicken for me... flounder and salmon... some steaks for Austin (growing boy needs red meat)... I baked two different kinds of squash and potatoes so that they can just be heated up when I'm ready to eat them. I roasted garlic. My farm friend suggested that I use the spicy garlic - German and Russian varieties instead of the standard Italian - for roasting as it holds it's flavor better... I've got carrots and celery sticks ready for hummus... just a really good week of eating ahead of me, already paid for, cooked and ready to eat! I'm feeling quite accomplished!
I'll close with the BEST COMMENT EVER....
Electric Blue said...
This has nothing to do with your post, but I just have to say, there's no way you're 42! I think you're much younger than that... I demand to see your driver's license!
September 25, 2010 11:25 AM
It's true! I'm 42 and proud of every year of it. To be fair... not all of the pictures on my sidebar were taken this year... they range in time over the past 4 years. It's weird... now that we have contact via facebook with so many of the people that we went to school with... I realize that I have been blessed - for whatever reason - and that I have aged a little more gracefully than others. And... let's not forget that fat plumps out wrinkles...

Wow all that healthy food just looks delicious!! I am so inspired.