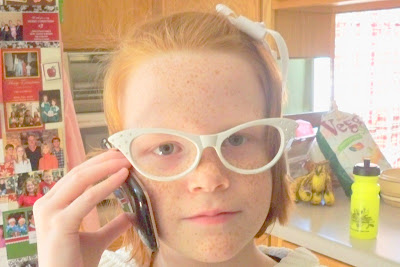 I have a nasty sinus headache this morning... It's been traveling between one side of my head and the other since yesterday. I took my allegra - grudgingly - and I'm hoping to be clear headed soon.

How cute was my little Junie-Beth Jones yesterday? I posted the whole album on facebook. It's public so even if you don't have facebook, you can click on my little facebook picture on the side and find it, I think. Austin made a great Mr. Scary. We drew his mustache in with eye liner. It looks sorta real. We made his glasses by poking out the lenses from an old pair of scratched up sunglasses. Good times. As much of a pain as Austin has been over the past week, I appreciate how kind he is to his little cousins and how indulgent he is with her little friends.

I haven't done my big meal prep for the week... child support didn't happen so there's no money for a big grocery trip until after I get paid tomorrow. I've got lots of 3 bean salad leftover, though and I picked up some good stuff to round out the menu- probably will last us thru most of the week. I don't subscribe to the "I can't afford to eat healthy" mentality. If NOTHING ELSE black beans and brown rice will go a long way and provide lots of protein and fiber... add some cumin and garlic and it's really a tasty meal. I've also got tuna packed in water. I've got lentils. I've got turkey burgers in the freezer. Nobody here will go hungry... or have to eat junk.

Yesterday was such a beautiful day... the farm was busy. It's tourist season here in the mountains... lots of traffic thru town (which gets on my nerves but it's vital to the economy of this area so you try not to resent it much). I picked up some incredibly crisp collard greens at the farm... and several different kinds of pepper and variations of garlic. i also bought some turnips and greens... and two colors of sweet potatoes... Nadine's pimento cheese for Austin. I bought a loaf of fresh baked cheddar cheese bread at the bakery... picked up some chicken sausage at the grocery store... I didn't spend a lot yesterday but we do have some good things to eat.

For dinner last night I sauteed an onion with about a cup of pepper rings and garlic... added about three cups of those awesome fresh collard greens... added in the chicken sausage..... and served it over whole wheat pasta with fresh shaved parmesan cheese. There were so many layers of flavor and it ended up being about 4 weight watchers points per cup of pasta.

At the farm yesterday Nadine made some potato soup... and it got me craving it... but it's not point friendly. I've got to figure out a way to make something similar that's more nutritious and lower calorie. That's my cooking project for the day. I know I definitely want some kale in it... I love a rich hearty stew with kale. I also want to make good use of the turnips... big, fresh, organically grown turnips. Last week I used turnip in my turkey-veggie aka fingertip loaf... and i used diced turnip in my 3 bean salad. Raw turnip has a peppery bite like radish. I'm wondering if I could do something with white beans... turnips... kale... hmmm... just sort of thinking out loud. Most people use bacon to flavor their potato soup and I really try to stay away from preserved meats because of the chemicals involved.

Anyways... I did have birthday cake yesterday. It was good... Angie made it herself because the lady who usually makes the girls fabulous cakes was overbooked and couldn't do it. I just don't get the same thrill from sweets that I once did. We're so accustomed to the flavor and texture of sweets and fats in the American diet. Once you remove those two blinders and start really enjoying food the way God intended it... going back to something sweet isn't as big of a treat. I enjoyed the pasta dish far more than I ever would any cake. Even when I bought angel food cake from the bakery two weeks ago... it was the strawberries that I added that really gave me the level of flavor I was looking for... and I'd much rather have my 3 bean salad with cilantro and red wine vinegar and red onion than a boring hamburger. That carbfest last week? The roasted garlic, basil and olive oil were the flavors I enjoyed... much more than the actual pizza dough.

And that, my friends, is what you call a BREAKTHROUGH! An EPIPHANY! To realize how much better real food tastes than artificially enhanced, oversweetened, fatty foods.

Weight Watchers emphasizes that you can eat ANYTHING in the right portions and you'll be successful. Yeah. I guess. But... ultimately... if you're not changing WHAT you're eating and have to rely on constant self-discipline to keep those portions small enough... and if you're eating stuff that isn't filling or nutrient dense... you're going to continue to be hungry and NOBODY is disciplined enough to live their life hungry. It's just a recipe for failure. As long as your taste buds are wearing sugar/fat blinders you're not going to enjoy healthy food. You're going to keep craving the fatty sugary stuff and you're never going to be satisfied. The problem with that for me is that if everything is going well, I can dig up the discipline. But when I'm overtired or under stress or depressed or sad or happy or whatever excuse I have at the moment... I don't have enough discipline to consistently eat only acceptible portions.

It's true that I have placed restrictions on the foods I eat... but it doesn't feel restrictive at all. It actually feels quite freeing. If I want to eat a huge amount of something healthy... then I've only overdosed on nutrients instead of gorging on unhealthy food and feeling sluggish and uncomfortable. And it's cheesy to say it but it's true... nothing tastes as good as losing weight feels.

I guess I'm on a diet. It doesn't really feel like it, though. Sure, there are things that I choose not to eat. I'll pass on the biscuits or donuts that they bring into the office. If Austin eats a huge plate of spaghetti (like he did last week) I'll have 1 cup of spaghetti as a side dish with my stir fried chicken and squash (like I did last week). It doesn't feel like deprivation. If I really want something... like birthday cake... I'll eat it and just accomodate for it with my points instead of looking at it like "well, I've blown it for today anyways" and use it as an excuse to binge. I'm not living on grilled chicken and steamed broccoli. I eat a huge variety of really good tasting food. I constantly research to find new flavors and textures of food. It's more like an adventure... a hobby... than a diet.

I've lost 26.2 pounds. I've got about 52 more pounds to go to my weight watchers goal... so I'm only about a third of the way there. It doesn't feel tiresome, though. It doesn't feel like a chore. I'm not counting down the days until I can go back to my old way of eating. I don't miss it at all. And for the first time in my life, I feel like I'm no longer condemned to be fat because I'm no longer addicted to the things that made me fat.

Now if I can just get my butt in gear to get this house cleaned and get a good solid exercise routine going...

Yummy. Love reading all your food thoughts. We have found that with Doug's food allergies to wheat, eggs and yeast that it actually causes him physical pain in his muscles and joints and makes him feel "loopy." I make a homemade potato soup that is totally an indulgent dose of deliciousness but my base is chicken stock. You could also use a veggie or beef stock. The stock adds so much flavor, and I do not use much salt in anything I cook. I don't make my own chicken stock, but I have found one that is low fat and msg free (msg triggers headaches for me). Wonder how chopped turnips would be in potato soup . . . hmmm . . .

I think you are doing great. I also think its great that you are exposing your children to such healthy food options early. My kids have gotten so picky, except the stepson, he will eat anything.

It's tough to keep to a diet routine, but always remind yourself why you chose to stick to it! Anyway, I'm sorry you have a sinus headache. I'm working with Zicam; visit http://bit.ly/aZLzSy for $2 off Zicam Intense Sinus Relief Nasal Gel. Feel better!