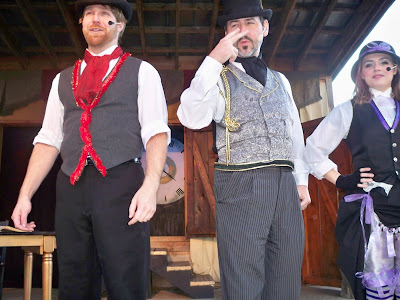 I've been asked to say a few words about Purple Michael for a newspaper article highlighting his upcoming show. I don't know how to limit a decade of appreciation for someone like him to just a few words. He is, truly, the most magical person I've ever met.

One of my earliest memories of Michael came just after 9-11. My children were performing in a local production of The Nutcracker and he was appearing as Hans Stahlbaum (Clara's father) and Mother Ginger. Right before showtime one night he passed out... low blood sugar. There was a doctor in the audience who provided quick assistance and although Michael didn't perform in the first act, he was sufficiently recovered by the second act to put on the heavy Mother Ginger frame and multitudes of fabric and sauntered out on stage, bringing his usual comedic relief to an otherwise serious art form. That was my first glimpse of his magic.

I soon learned that working with Michael meant keeping an apple and a jar of peanut butter nearby... not because he has fragile health but because he is so passionate about performing that he forgets to eat. It wasn't unusual for me to have a crockpot of pinto beans simmering in his office as he worked with our local summer theatre program... my daddy would bring by homemade pimento cheese (we were in Georgia, you understand)... and we frequently received generous invitations to dinner. Everyone wanted to keep our magician on stage.

It was through that Summer theatre program that I began to witness Michael's amazing creativity. He had been hired to produce two shows that summer, Footloose - with a cast of teenagers - and Fiddler on the Roof - with a group of people of various ages and performing ability. One day during pre-production, he took his script into an empty theatre. I settled myself with a spiral notebook and fountain pen in the middle of the stage. He began pacing from one end of the stage to the other, flipping pages and enthusiastically talking me through the entire show while I took frantic and copious notes. In a matter of less than an hour, he brought that script to life before my eyes. I had limited experience in theatre at that point and was absolutely mesmerized by his ability to see into those words and not only create a vision but to impart that vision on others. His passion is contagious. You can't work with Michael without falling in love with live theatre.

Michael dreams big. He sees beyond the boundaries. He doesn't accept second best. He works tirelessly. Many nights I had to drive him home after rehearsal because he simply did not have the strength to operate a vehicle. He pours every ounce of his being into his productions. He always wants to make it better... brighter... more professional... he does everything he can to make sure his audiences leave knowing that they have seen something special.

Through our work in local theatre, I have watched many performers catch a spark for performing from Michael. Many of those young people have gone on to successful performing careers. I've always said that if you do something you're passionate about, you'll never work a day in your life... and because of Michael's influence, there is a generation of young people from our little neck of the woods south of Atlanta, Georgia, who will live their dreams out on stage, able to make a living without every really working.

Everyone associated with the theatre comes to accept the concept of a "show family"... you become extremely close and bonded to people during the run of a show, but when that show is over, you lose touch with most of them, until you perform together again. Michael doesn't. Michael remains an active part in the lives of the people with whom he's worked. He attends their performances, celebrates their successes and continues to guide them long after the curtain closes. He is passionate about the art, passionate about the performers and passionate about making the written word - and music - come to life.

He refers to me as his muse and it simply baffles me. How could I, small town Southern girl, be a source of inspiration for someone with so much passion and vision? To me, the magic is within him and I have just had the distinct honor of holding up a mirror before him so that he can catch a glimpse of that magic and hopefully, see what others see in him.

I wish I could say a few words about Michael. It's simply impossible to describe what he brings to the world of theatre - to the world in general - with only a few words. I love you, my dear! Break a leg!

Beautifully written! What a tribute!