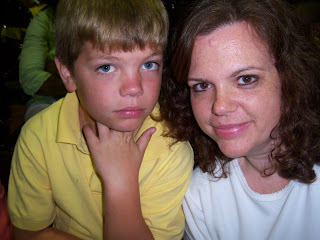 (this is Bobby and myself at Cody's graduation this year)

Details are trickling in regarding the loss of my stepson's mother, Misty. Again, I am sharing without permission... but I know many of you will agree with me in prayer and I know that you will feel the sadness we are feeling for this little boy...

Today Bobby and Misty were at Walmart and she started feeling poorly. She got some water and sat down for a few minutes. She started to feel better so they got in the car to go home. On the drive home she slumped over the steering wheel. Bobby somehow managed to steer the car off the road. He got Misty's cellphone and called 9-1-1, called his grandpa and didn't get an answer, called the neighbor... and then he got out and flagged down a passing motorist.
At some point during all of this, Michael called to rib Bobby about the Georgia / Florida game. Bobby is a Georgia fan, Michael is, of course, a Florida fan. They had a bet that whichever team scored the first touchdown, they would both cheer for that team. When Michael called to remind Bobby that he had to cheer for Florida... he heard all the commotion in the background. Bobby said, "my mom has had a heart attack but she's gonna be ok" and someone - presumably a bystander - took the phone and informed Michael that she was indeed, NOT ok.. that she had passed away. Bobby had to process all of these events alone with his mother... he was the one with her in those last moments.

I cannot even begin to tell you how proud I am of Bobby. He is nine years old... to have the presence of mind and the maturity to know how to handle the situation... it's incredible. As much as our hearts are breaking at what Bobby has seen and experienced today, our hearts are bursting with pride at his ability to deal with things in his mom's final minutes. 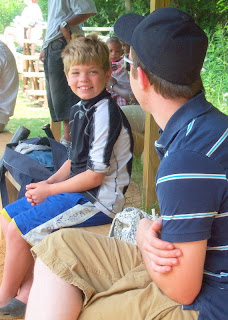 This picture was also taken on the day of Cody's graduation. We were at Cody's baseball practice and Bobby was thrilled to be in the dugout watching the action. You will notice his inside out and backwards shirt... that's Bobby... he's just a goofy "all boy" little boy.... a huge sports fan... he absolutely worshipped Cody... and talked alllllll summer about watching Cody's practice.
Michael is on his way to be with Bobby now. Michael's brother, Tim is with him. I'm glad someone will be with them. Tim is a good guy... he came to my hospital room with his bible and it has stuck in my mind ever since. I am not sure what Tim wanted to share with me, as there was too much chaos and I was not entirely conscious at the time, but I remember seeing him with his bible and I was comforted by the fact that he wanted to share the Word of God with me. I haven't had the opportunity to talk to Tim since.
I am acutely conscious of the fragility of life. I know that "but for the Grace of God" my life could have ended six weeks ago. I feel guilty for taking what was God's to give or take - life - into my own hands. I am grateful that I survived. I am sad that Michael has had to face this crisis in the aftermath of our crisis. It is a lot to bear. It's hard to fathom all of this... hard to understand why... hard to imagine three little kids without a mom, especially a mom who loved them so deeply. She was a good mother. She was so excited about her new baby boy. Her myspace page has pictures of her with her kids... I keep looking at them... just numb.

Oh, that poor little brave boy. Bless his heart, he did everything right, and I hope he'll be okay. He was with his Mom in her last moments, so I hope he'll be able to get some grief counseling--that could be something that will linger with him, and he might need some help with that.

My thoughts and prayers are with him and all his family.

OMG... how awful and sad! Praying for Bobby and all the kids. Too young... so so sad.

How very very sad...Bobby & his family are in my prayers.life is so precious; its inconceivable how quickly just end....take care, love maire (ps. cant get my password to work, hence the anon. comment, sorry)

What a courageous boy! To know what to do and do it! Remminds us how fragile life is. My heart aches for Bobby, and the other kids.

that poor, poor, child. Could my 11 year old do that? I don't think so. My 9 year old would freeze.
did Misty have heart problems? how did bobby know it was a heart attack?

So so sorry to hear about this little boys loss. What a brave young man and my heart goes out to him and his family. take care

This is so sad. I hope that Michael can bring comfort to Bobby.

How awful! I can't imagine what pain that boy is experiencing at the loss of his mom at his age! And..being there as it happened.....OMG!!! He was brave, and focused to deal with such horror! He and your entire family will be in my thoughts and prayers! Hugs, Lisa